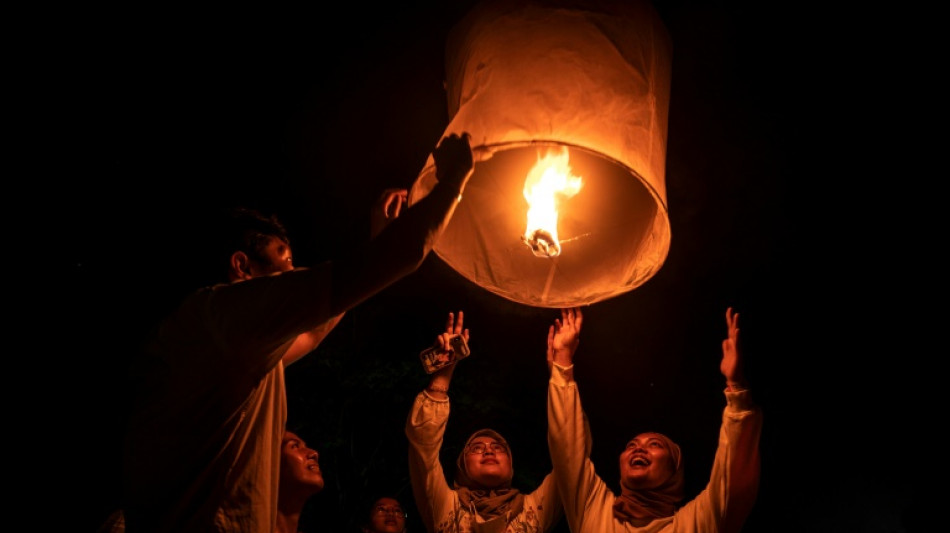 Hundreds of lanterns were released into the sky by Indonesian Buddhists celebrating Vesak day at the temple of Borobudur for the first time since the coronavirus pandemic hit the country.

More than a thousand Buddhists from across the archipelago gathered at the largest Buddhist temple in the world, situated in Magelang, Central Java, to commemorate the birth, enlightenment and death of Buddha Siddharta Gautama.

Celebrations on Monday night included prayers and meditation, collecting holy water and the release of flying lanterns symbolising the letting go of negativity.

"This is the first time we were able to hold the celebration since the pandemic started, since we are still in the middle of the pandemic, we limited the number of participants to only 1,200 people," Eric Fernardo, the spokesman for the event, told AFP on Monday.

Only those who received an invitation and a double dose of a Covid-19 vaccine were allowed to enter the sprawling complex of Borobudur to join the ceremonies.

Before the pandemic, the event was usually attended by more than 20,000 people from across the Muslim-majority country and other places.

"After two years of not being able to celebrate Vesak Day here, now we finally can, even though not exactly like before the pandemic as there still are restrictions, but I'm so happy", Christina, a 20-year-old Buddhist who goes by one name, told AFP.

"We can still feel the enthusiasm and excitement, even though the number of attendees are limited," added the student from Jakarta, the Indonesian capital.

Despite the restrictions and stringent health protocols, monks and worshippers reverently followed the three-day procession and ceremonies, including the ritual to collect holy water from the pristine springs at Jumprit in nearby Temanggung district.

The procession and the countdown to Vesak, just before midnight on Monday, were also livestreamed for those who did not have an invitation to attend the event.

Indonesian Buddhists account for less than one percent of the country's more than 270 million people.

Built in the ninth century, the Borobudur Temple was abandoned when the Hindu kingdoms of Java island declined and a majority of Javanese began to convert to Islam.

Buried under volcanic ash and hidden in the jungle, the temple's existence was largely forgotten until the 19th century. It has undergone a major restoration and is today a UNESCO world heritage site.