Trump 'wild' rally tweet was a 'call to arms': committee 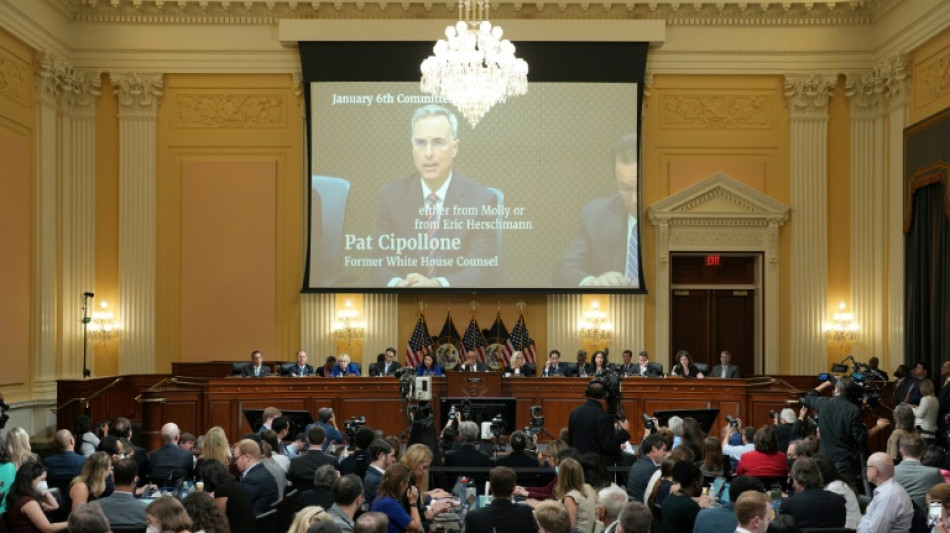 Right-wing extremists and supporters of Donald Trump staged the January 6, 2021 assault on the US Capitol after a tweet from the former president seen as a "call to arms," lawmakers said Tuesday.

Liz Cheney, vice chair of the House select committee investigating the attack on Congress, said meanwhile that Trump had attempted recently to call a committee witness.

The witness, who was not identified, did not take the call from Trump and alerted their lawyer, who contacted the committee, Cheney said.

"This committee has supplied that information to the Department of Justice," she said.

During its seventh televised public hearing, the House committee examined the impact of a tweet that Trump sent on December 19 urging his supporters to descend on Washington on January 6 for a rally he promised would be "wild."

The tweet was sent a little more than an hour after Trump met at the White House with his lawyer Rudy Giuliani, former general Mike Flynn, and Sidney Powell, another attorney, for a meeting which one White House aide described as "unhinged."

"Donald Trump's 1:42 am tweet electrified and galvanized his supporters, especially the dangerous extremists in the Oath Keepers, the Proud Boys and other racist and white nationalist groups spoiling for a fight against the government," said committee member Jamie Raskin.

Members of the Proud Boys and the Oath Keepers stormed Congress on January 6, 2021 along with thousands of Trump loyalists in an attempt to prevent the certification of Democrat Joe Biden's presidential election victory, which Trump falsely claims was marred by fraud.

"A president who lost an election deployed a mob which included dangerous extremists to attack the constitutional system of election and the peaceful transfer of power," Raskin said.

Stephanie Murphy, another committee member, said the tweet "served as a call to action, and in some cases as a call to arms, for many of president Trump's most loyal supporters."

The committee said two of Trump's closest backers, Flynn and political consultant Roger Stone, had connections to the Oath Keepers.

The committee also said the march to the Capitol was planned in advance but Trump decided not to announce it until a speech he made to supporters on the morning of January 6 near the White House.

"The evidence confirms that this was not a spontaneous call to action, but rather was a deliberate strategy decided upon in advance by the president," Murphy said.

Cassidy Hutchinson, an aide to the former president's chief of staff Mark Meadows, testified at a previous hearing that Trump had intended to go to the Capitol with his supporters but was prevented from doing so by Secret Service agents.

Hutchinson said she was told that Trump had angrily lunged at his Secret Service driver and grabbed at the steering wheel of his limousine in a bid to join the crowd marching on Congress.

The committee is trying to determine whether Trump or his associates had a role in planning or encouraging the violent insurrection and has subpoenaed numerous advisors and aides to the former president.

In his testimony, Cipollone said he agreed there was no evidence of significant election fraud and that Trump should have conceded to Biden.

More than 850 people have been arrested in connection with the storming of Congress by Trump supporters.

Five members of the Proud Boys were indicted in June on seditious conspiracy charges and 11 members of the Oath Keepers face the same charges, which carry a sentence of up to 20 years in prison.

The assault on the Capitol left at least five people dead and 140 police officers injured, and followed a fiery speech by Trump to thousands of his supporters near the White House.

Trump was impeached for a historic second time by the House of Representatives after the riot -- he was charged with inciting an insurrection -- but was acquitted by the Senate.

In a statement Tuesday on the Truth Social platform, Trump denounced the committee as "Political Hacks and Thugs."

"Have you seen them before?" he asked. "Yes, they are essentially the same lunatics that drove the Country 'crazy' with their lies and made up stories."