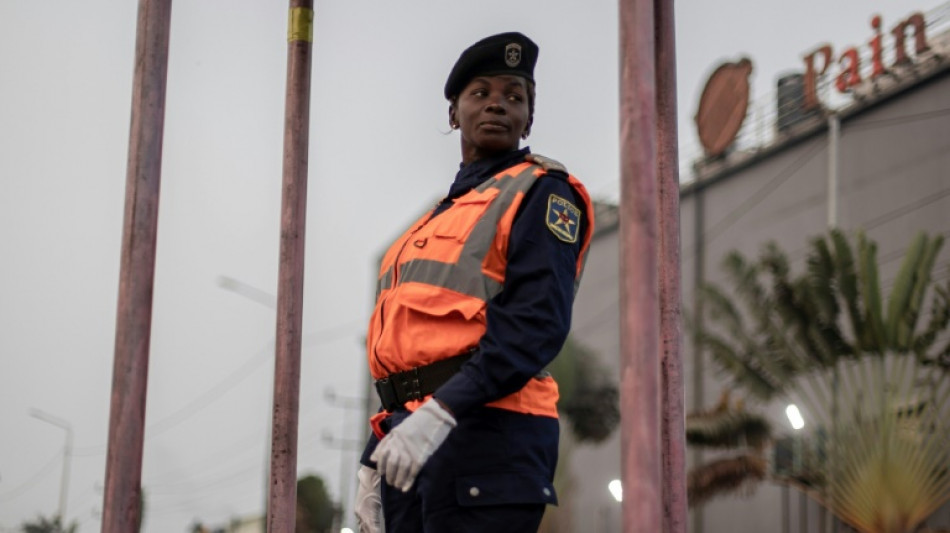 At dawn in a working-class district of Kinshasa, a driver slows to a halt and hands a fistful of small bills to a traffic cop.

The sight is common in the Democratic Republic of Congo's bustling capital, where ill-paid officers are notorious for shaking down commuters.

But unlike some of her less scrupulous colleagues, police officer Celine Bakindo had solicited no money. The driver had simply stopped to give her a tip for doing her job.

"People like me a lot," said Bakindo, wearing a beret, white gloves and a fluorescent orange vest over her navy-blue uniform.

"They give me lots of presents."

Traffic cops in the megacity of 15 million have an entrenched image for corruption.

It's not uncommon for them to leap inside a car to accuse the driver of an imaginary infraction and snatch the key in the hope of extracting payment. Police are even known to rip off license plates during traffic stops.

Public disillusionment with the force is deep enough that a practice has developed that, elsewhere in the world, may seem paradoxical: people give money to police who are straight.

In Kinshasa, honest traffic cops are city institutions -- word of their integrity swiftly spreads through conversations or on social media, and many reap rewards in tips as a result.

After Bakindo mounts a platform in the middle of her busy intersection, she smiles as she directs swarms of motorbikes and decrepit collective taxis to their destinations.

Another motorist slows down to offer her money in the space of a few minutes.

Locals, long accustomed to police harassment, said they appreciate her commitment to work and her honesty.

At another intersection in the city centre, a tall and soft-spoken police captain with heavy black spectacles has also become a local celebrity for incorruptibility.

Jean-Pierre Beya, 64, has stood under the sun at the same junction for about 15 years, smiling genially at commuters as they crawl past in late-afternoon traffic.

Drivers who surge dangerously across the intersection earn a finger-wag and a stern talking-to.

Isaac Woto, a nearby taxi driver, said that both Beya and Bakindo are known across Kinshasa.

"They're serious" about their jobs, said the 45-year-old. "The others, they're just looking for money."

Corruption is an engrained problem in the DRC.

A vast country the size of continental western Europe, it ranks a lowly 169th out of 180 nations in the 2021 Corruption Perceptions Index by the NGO Transparency International.

Around 80 percent of their income came from bribes, the team say in a study due to be published next week by the US-based National Bureau of Economic Research (NBER).

Looking at more than 15,000 interactions between drivers and police, the researchers concluded that the bribery was codified into a system -- cops had to achieve a quota of kickbacks.

In 2015, according to their calculation, bribes raised an average of $12,120 per month per police station.

A traffic officer, who spoke to AFP on condition of anonymity, denied that soliciting bribes was routine, but admitted that there was impunity for senior police officers and politicians who drove dangerously.

A spokesman for the Congolese national police did not respond to requests for comment.

The unsolicited tips that AFP saw changing hands appeared to range from the equivalent of 50 US cents to a few dollars.

Such sums can be significant in a country where nearly three-quarters of the population of 90 million lives on under $1.9 a day, according to World Bank figures.

But he dismissed the notion that poverty was what prompted some of his colleagues to shake drivers down.

"We're all on the same salary," the captain said, as he took a break in the shade.

"The problem is mentality," he said. "I work for the republic."

Locals seemed to cherish Beya, offering him tips and saluting or bowing as they passed by.

Beya, like Bakindo, said accepting tips was within the rules.

"It's not corruption," Beya said, explaining that gifts do not affect his impartiality.

"If you do things with respect and courtesy, you'll get something in return."