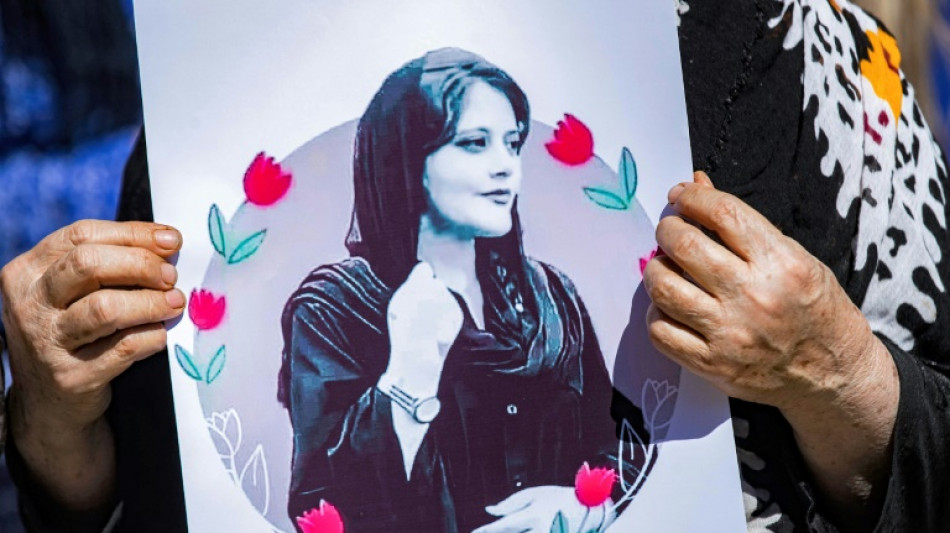 Gunmen on motorcycles in Iran killed nine people, including two children, in mysterious attacks as protests over Mahsa Amini's death intensified on the anniversary of a bloody 2019 crackdown.

A protester was killed in Bukan on Thursday, the Oslo-based Hengaw rights group said, after reporting at least 10 slain in running street battles in western Iran on Wednesday.

The motorbike attacks occurred as protests over the September 16 death in custody of Mahsa Amini, after her arrest for allegedly flouting Iran's strict dress code for women, intensified on the third anniversary of bloody crackdown on unrest over fuel price hikes.

The unrest has been fanned by fury over the brutal enforcement of the mandatory hijab law, but has grown into a broad movement against the theocracy that has ruled Iran since the 1979 Islamic Revolution.

In some of the worst violence since the protests began, assailants on motorbikes shot dead seven people, including a woman and two children aged nine and 13, in the western city of Izeh on Wednesday evening, state media said.

"A terrorist group took advantage of a gathering of protesters in front of the central market of the locality to open fire on people and security officers," the official IRNA news agency reported.

Eight people were wounded, including three police and two members of the Basij paramilitary force that is linked to the Islamic Revolutionary Guard Corps, IRNA added.

It is the second attack the authorities have blamed on "terrorists" since nationwide protests flared over Amini's death, after at least 13 people were killed at a shrine in the southern city of Shiraz on October 26.

But a family member of the slain nine-year-old boy, identified as Kian Pirfalak, accused Iranian security forces of carrying out the attack, in a tweet shared by Radio Farda, a US-funded Persian station based in Prague.

"He was going home with his father and was targeted with bullets by the corrupt regime of the Islamic republic. Their car was attacked from all four sides," the unidentified family member is heard saying in an audio recording.

Ultra-conservative President Ebrahim Raisi ordered the authorities "to act promptly to identify the perpetrators of the attack and hand them over to the justice system for punishment", Fars reported.

Elsewhere, the security forces were accused of killing at least 10 people within a 24-hour period during protests in the cities of Bukan, Kamyaran, Sanandaj and Amini's home town of Saqez, Hengaw said late Wednesday.

The rights group, which monitors violations in Kurdish-populated areas, said strikes were being observed Thursday in those four cities as well as others including Dehgolan, Ilam, Mahabad and Ravanasar.

Iran Human Rights, another Oslo-based organisation, said in an updated toll issued on Wednesday that security forces had killed at least 342 people, including 43 children and 26 women, in the crackdown since Amini's death.

The human rights group said at least 15,000 people have been arrested -- a figure the Iranian authorities deny.

Iran has handed down five death sentences since Sunday in connection with the protests that have shaken the Islamic republic's clerical leadership.

Amnesty International on Wednesday condemned Iran's "chilling use of the death penalty to further brutally quell (the) popular uprising".

The London-based rights group said the authorities were seeking the death penalty for at least 21 people in "sham trials designed to intimidate" the protest movement.

"The Iranian authorities must immediately quash all death sentences, refrain from seeking the imposition of the death penalty and drop all charges against those arrested in connection with their peaceful participation in protests," Amnesty's Diana Eltahawy said.

"Two months into the popular uprising and three years on from the November 2019 protests, the crisis of impunity prevailing in Iran is enabling the Iranian authorities to not only continue carrying out mass killings but also to escalate the use of the death penalty as a tool of political repression."

Britain's domestic spy agency MI5 said on Wednesday that Iran wanted to kidnap or kill UK-based individuals it deems "enemies of the regime", with at least 10 plots uncovered so far this year.