Jailed Egypt dissident was 'near death' on hunger strike: family 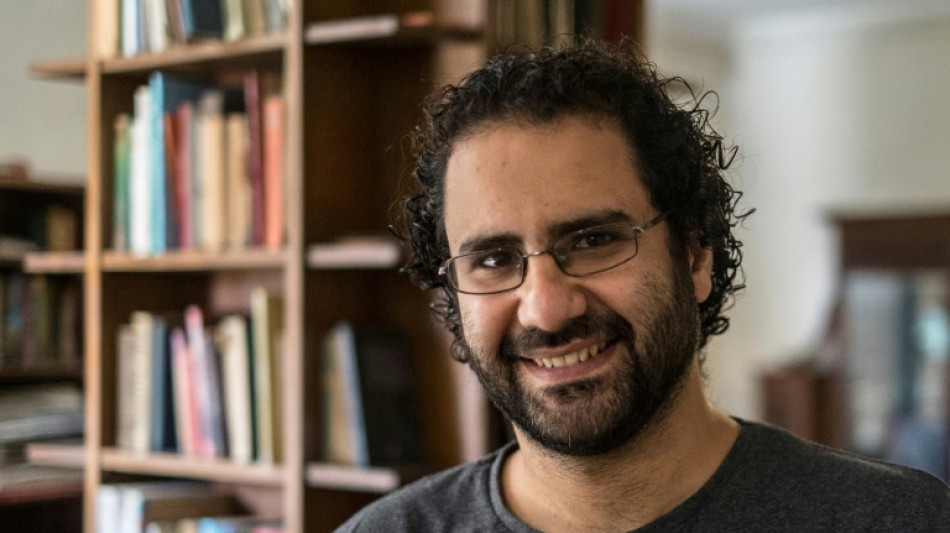 Jailed British-Egyptian activist Alaa Abdel Fattah was "near" to death behind bars, his family told AFP Thursday after the first family visit since he ended a seven-month long hunger strike.

"When we saw him today, he was exhausted, weak and vulnerable," the activist's aunt novelist Ahdaf Soueif said. "He was very, very thin and sometimes leaned against the wall".

After seven months consuming what his family said was "100 calories a day", Abdel Fattah escalated his strike to all food, and then water on November 6 to coincide with the start of the UN COP27 climate summit in Egypt.

On Monday he wrote a letter saying he had ended the strike, and on Thursday his family was allowed access for the first time in nearly a month in the prison, north of Cairo.

"We saw him in the visitation booth of Wadi al-Natroun prison, with a glass barrier between us, with one very faint headset that we could talk to him through one at a time," his sister Sanaa Seif said.

His other sister Mona Seif -- in London campaigning for his release -- said news from the visit was "unsettling".

"Alaa deteriorated severely in the past two weeks, but at least they got to see him, and he needed to see the family so much," she wrote on Twitter.

Abdel Fattah recounted to his family how, five days into his food and water strike, he lost consciousness in the shower, at which point he was given fluids.

"He talked about all of this as a near-death experience," Soueif said.

The family have submitted a new request for a presidential pardon, and hopes it could be granted were raised when the plea was picked up by one of Egypt's most watched talk show hosts, the ardently pro-Sisi Amr Adib.

On Thursday, civil society delegates at the closing of the COP27 People's Plenary in Egypt's seaside town of Sharm el-Sheikh chanted "Free Alaa! Free them all!"

Several speakers at the summit have ended with the words "You have not yet been defeated" -- the title of Abdel Fattah's book. It has become a rallying cry for activists, both at the climate talks and posting online, demanding climate justice and human rights.

"We hope that the incredible global attention on Alaa's case, and the tens of thousands of people who are now standing by him, will lead to his release," Soueif said, adding that her nephew had had no idea of the mass campaign supporting him.

"He has been completely in the dark as to what's happening in the world outside," she said.

But as the summit wraps up in coming days, Sanaa Seif worries that soon "the attention will be less."

Egyptian human rights defenders -- who have stepped into a rare spotlight on the summit's sidelines -- fear what will happen once the summit's cameras are gone.

Rights groups estimate Cairo is holding about 60,000 political prisoners, many of them in brutal conditions and overcrowded cells. Egypt rejects the reports.