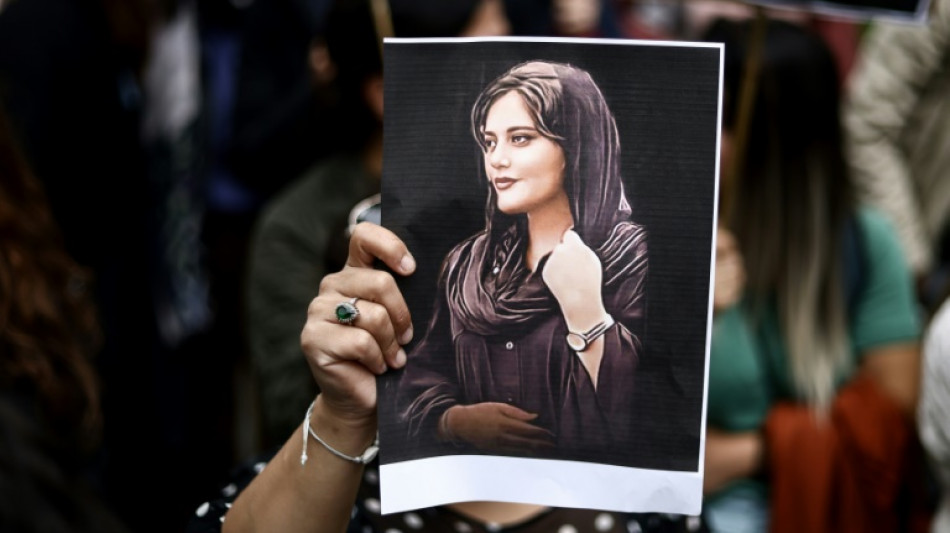 Iranian security forces killed at least three protesters Saturday in the latest violence against demonstrations sparked by the death of Mahsa Amini, a rights group said.

The country's clerical leadership under Ayatollah Ali Khamenei is facing its biggest challenge since the Islamic Revolution of 1979, in the two months of civil unrest following Amini's death in custody on September 16.

The state has responded with a crackdown that Oslo-based group Iran Human Rights said in an updated toll Saturday had left at least 378 people dead, among them 47 children.

Hengaw, a Norway-based rights group which monitors abuses in Kurdish areas, warned the situation was "critical" in the town of Divandarreh in the western province of Kurdistan, where government forces had shot dead at least three civilians.

Protesters have been killed in 25 of Iran's 31 provinces, IHR said Saturday -- including 123 in eastern Sistan-Baluchistan and 40 in Amini's home province of Kurdistan.

Amini, a 22-year-old Iranian of Kurdish origin, died three days after her arrest in Tehran by the notorious morality police over an alleged breach of the Islamic republic's dress code for women which includes the mandatory hijab headscarf.

Protests raged overnight in the town of Bukan in Kurdistan, where Revolutionary Guards opened fire on family members mourning a slain protester and taking his body from hospital before burying it in an undisclosed location, Hengaw said.

Activists accuse Iran's security forces of carrying out secret burials of protesters they have killed, to prevent more violence from flaring at their funerals.

The group said the forces "opened fire on his family and inflicted injuries on at least five of them".

Elsewhere, hundreds of mourners were seen marching Saturday along a road near Mahabad in West Azerbaijan province for the funeral of Kamal Ahmadpour, a young man shot dead by security forces, in a video published by the 1500tasvir monitor.

"The Islamic Republic of Iran's forces have significantly increased the use of lethal weapons in attacks on protesters in the past five days," Hengaw told AFP.

The rights group said security forces had killed at least 25 people in Kurdistan since Tuesday, when protesters thronged streets on the anniversary of a lethal 2019 crackdown known as "Bloody Aban" -- or Bloody November.

"Twenty-three people were killed by direct fire, one by torture, and one by knife stabs," Hengaw said.

At least 12 security personnel have been killed in the three days of protests called to mark the November 15 anniversary, according to an AFP tally from official sources.

Hundreds were killed in the crackdown three years ago on street violence that erupted over a hike in fuel prices.

Iran's foreign ministry hit out at the "deliberate silence of foreign promoters of chaos and violence in Iran in the face of... terrorist operations in several Iranian cities".

"It is the duty of the international community and international assemblies to condemn the recent terrorist acts in Iran and not to provide a safe haven for extremists," it added.

Britain's domestic spy agency MI5 said Wednesday that Iran wanted to kidnap or kill UK-based individuals it deems "enemies of the regime", with at least 10 plots uncovered this year.

The Times newspaper on Saturday reported that British police had placed armed response vehicles outside the Persian-language Iran International television station in London, after threats by Iran against its journalists.

Iran Human Rights warned that the regime had been mounting a "campaign of spreading lies" ahead of a meeting of the UN Human Rights Council next week.

"They have two goals by attributing the killing of the protesters to terrorist groups like Daesh," said its director, Mahmood Amiry-Moghaddam, referring to the Islamic State group.

"They want to use it as an excuse for more widespread use of live ammunition," he told AFP.

"And they also want to influence countries in the UN Human Rights Council who will gather on November 24 in a special session considering establishing an independent investigation and accountability mechanism" over the crackdown in Iran, he added.