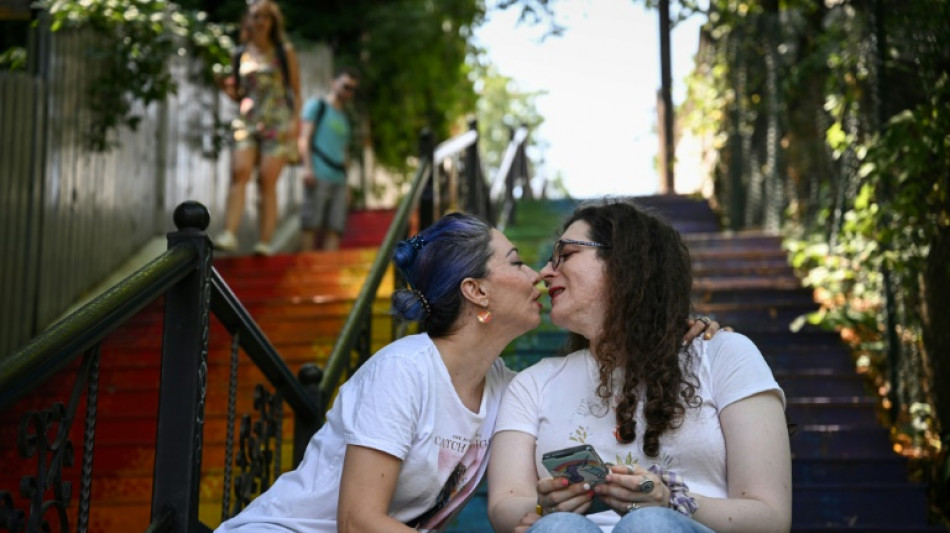 When Evie and Gia decided to get married they turned Romania's hardening discrimination against LGBTQ people on its head.

The country is one of the last in the EU where same sex marriages and civil partnerships are still outlawed, and last year its senate passed a law banning "gay propaganda" that might influence minors.

While Evie is a transgender woman, her identity papers class her as male.

So technically the two women could get legally married.

But official "resistance" to their union began as soon as Evie turned up at their local town hall with her life coach partner to sort out the paperwork.

"They looked at me weirdly... and said that they would have to do some extra checks on my background. They made me feel like a spy," said the 38-year-old IT developer.

Then officials demanded that "I come dressed according to the gender of my identity papers," said Evie, who refused.

On their wedding day, officials first refused to marry them before relenting "after 20 minutes of debate". They only managed to have photos taken after overcoming still more objections from the registrar.

The experience has left the couple, who did not want to reveal their full names for fear of attack, contemplating leaving the country.

"There are a lot of problems in the country's laws that directly affect people like me," said Evie.

The bill to prevent "the promotion of homosexuality and sex changes" is one of several such measures that hangs over Romania's LGBTQ community.

A carbon copy of a controversial Hungarian law, it still needs approval from parliament's lower house, and no vote has yet been scheduled.

Homosexuality was only decriminalised in Romania in 2001, and in recent years the country has increasingly tried to restrict LGBTQ rights, including trying to axe gender studies and to enshrine a ban on gay marriage in the constitution.

Pictures of Evie and Gia's wedding on Facebook drew "very negative" comments, though the reactions on TikTok, which is used by younger people, were more positive, the couple said.

"The older generation is still not accepting us," Evie said.

While anti-gay legislation in Hungary and Poland has hogged the headlines, Romania ranks among the lowest EU nations in terms of LGBTQ rights, according to advocacy group ILGA-Europe.

Romania's powerful Orthodox Church is often accused of fostering homophobic attitudes, but it was the party of the mostly Protestant ethnic Hungarian minority that proposed the latest law against "gay propaganda".

Party lawmaker Zoltan Zakarias denies it is "an attack on freedom", saying it aimed to "protect children from content promoting or popularising homosexuality".

"Sex education is up to the parents... and when someone reaches the age to decide, they do what they want," he told AFP.

But talking about gay propaganda was "absurd", said Gia. "Showing people exist doesn't mean you are promoting their way of life."

Florin Buhuceanu, head of LGBTQ group Accept, said that it is "sad to see that in the 21st century some people in the political class think we are still a threat."

Hadley Renkin, an anthropologist at the Vienna-based CEU university, said the laws were "part of a much deeper, broader trend" with political leaders, such as Hungary's Viktor Orban railing against an "overly liberal, too tolerant West".

"It is very important to recognise that these kind of laws are part of a larger dynamic between East and West," he told AFP.

For Evie and Gia the fight goes on. Evie has applied to a local court to have her gender changed on her identity document and expects a ruling soon.

She is hopeful of a positive decision based on a European Court of Human Rights judgement that sided with several Romanian transgendered people on the issue.