'There's no why': Shanghai rages at endless Covid lockdown 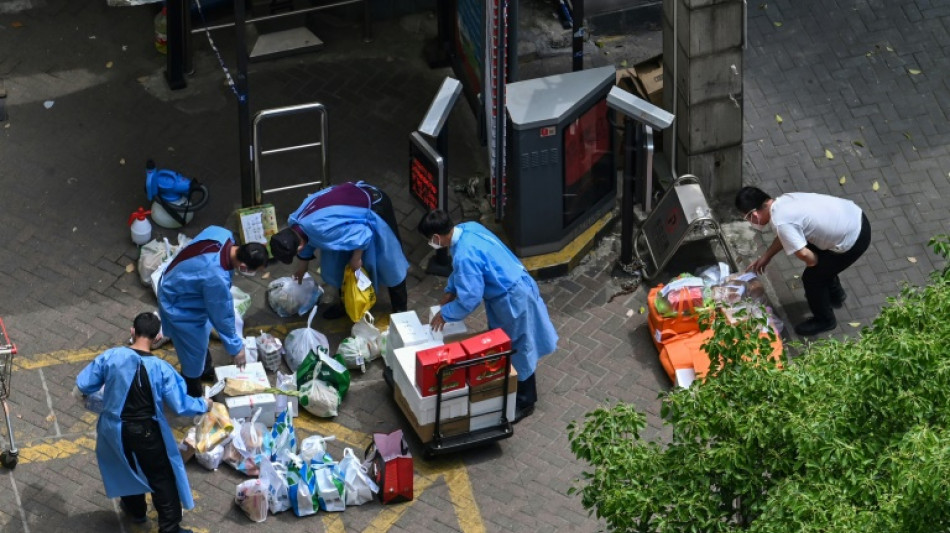 Scuffles with officials, workers storming factory gates and households raging at being dragged into quarantine -- Shanghai's long fight against Covid-19 is unravelling into chaos and desperation.

China insists on sticking to its zero-Covid strategy, and that has left most of Shanghai's 25 million residents locked down for several weeks.

The city is the epicentre of China's worst Covid outbreak to date, with more than half a million infections and over 500 deaths, according to official figures.

Yet despite cases dwindling into the low thousands in recent days, authorities are still conjuring new control measures.

Those include relocating entire residential compounds to quarantine -- even including people with negative virus tests -- and denying some food deliveries in a bid to stop the spread of the virus.

Residents who were initially told they would be at home for a just few days are now entering their sixth or seventh week of lockdown and anger is boiling over across the city.

Images emerged over the weekend of a street fight between locals and officials clad in white hazmat suits in Shanghai's Minhang district.

District officials later said "troublemakers" clashed with health management staff on Saturday night, inciting neighbours to rush out of their barricaded building as other residents threw objects onto the street from their windows.

Workers at Apple supplier Quanta's Shanghai factory fought with guards and broke through barricades last week over fears that Covid rules on the campus could get stricter, according to Bloomberg.

The flashpoints add to a catalogue of protests since the early-April start of lockdown, in a country where unrest is normally swiftly squashed and rarely seen by the wider public.

Shanghai officials claim the city is winning its Covid fight, declaring in past weeks that millions have been released from the strictest levels of lockdown.

But the view from the ground is different. Large neighbourhoods given a brief semblance of freedom have quietly been put back into lockdown, Shanghai residents told AFP.

Many who were placed in low-risk areas have been told that they cannot leave their apartments except to get Covid tests.

Compounds are ordering "silent periods" or curfews of as long as seven days during which people are forbidden to even order deliveries of personal items, according to official notices seen by AFP.

Meanwhile residents of multiple buildings have told AFP they have been warned of forcible movement to quarantine facilities if their neighbours test positive.

"All of us will be taken to a quarantine centre and we'll have to hand over our keys so they can come in and spray everything with disinfectant," a British citizen living in Shanghai's Xuhui district said, declining to be named for fear of retaliation.

Videos showing arguments with officials are now common on Chinese social media, with new confrontations being shared at a speed outpacing the censors' race to scrub them out.

One video that went viral over the weekend showed hazmat-suited officials arguing with a family in a mix of Mandarin and Shanghainese dialect.

"You can't do whatever you want, unless you go to America. This is China," one official says in the video after informing the family that they must be quarantined as they are same-floor contacts of a Covid case.

"Stop asking why. There's no why. This is according to national regulations."