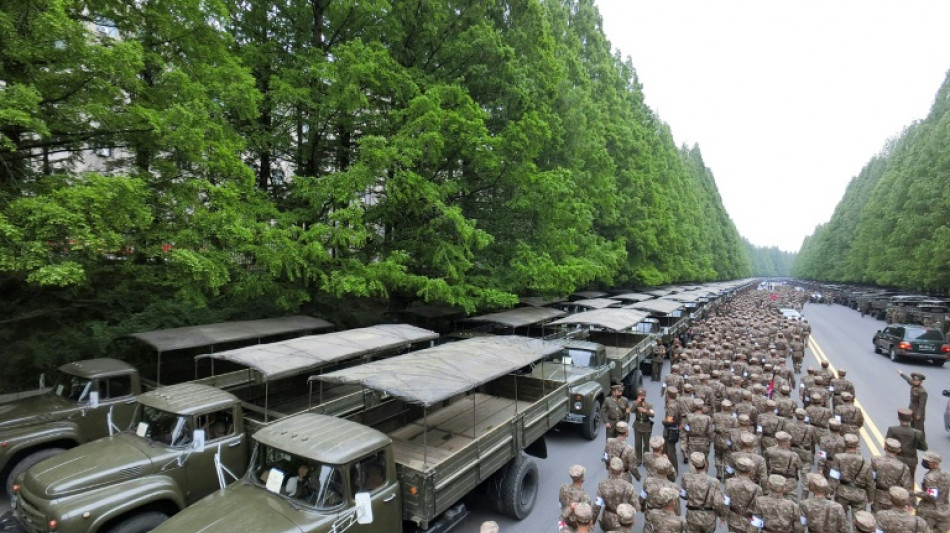 North Korean military medics ramped up the distribution of medicines to fight a growing coronavirus outbreak, state media said on Tuesday, with the number of reported cases of "fever" nearing 1.5 million.

Leader Kim Jong Un has ordered nationwide lockdowns to try and slow the spread of the disease through the unvaccinated population, and deployed the military after what he has called a botched response to the outbreak.

Hundreds of personnel in camouflage uniforms from the Korean People's Army medical units were seen rallying in the capital Pyongyang in photos released by the official Korean Central News Agency (KCNA).

The military "urgently deployed its powerful forces to all pharmacies in Pyongyang City and began to supply medicines under the 24-hour service system", KCNA said.

One KCNA photo showed soldiers walking next to a long line of green trucks.

Kim had strongly criticised healthcare officials for their failure to keep pharmacies open.

North Korea's leader has put himself front and centre of the country's Covid response since its first case was announced last week, saying the outbreak is causing "great upheaval".

Authorities had reported more than 1.48 million cases of "fever" as of Monday evening, KCNA said, with the death toll at 56.

Authorities have stepped up media awareness campaigns and pharmaceutical factories have increased the production of medicines, KCNA reported.

- No response to South Korea -

"Most North Koreans are chronically malnourished and unvaccinated, there are barely any medicines left in the country, and the health infrastructure is incapable to deal with this pandemic," Lina Yoon, senior Korea researcher at Human Rights Watch, said in a statement.

She urged the international community to offer medicines, vaccines and infrastructure to North Korea.

Pyongyang has so far not responded to an offer of help from Seoul, according to South Korea's unification ministry.

South Korea's new president Yoon Suk-yeol has taken a hawkish stance on his country's nuclear-armed neighbour, but told lawmakers Monday that he would "not hold back" on aid -- if Pyongyang accepts.

Despite the Covid crisis, new satellite imagery has indicated North Korea has resumed construction at a long-dormant nuclear reactor.

The United States and South Korea have warned that Kim is preparing to conduct another nuclear test -- the country's seventh.