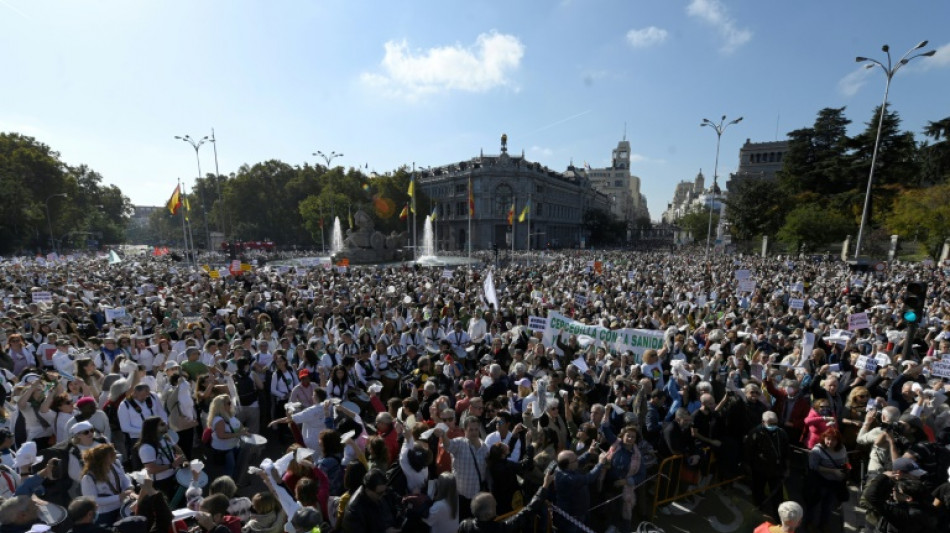 Hundreds of thousands of demonstrators rallied in Madrid on Sunday in defence of the region's primary care services, warning that plans to overhaul the system would "destroy" local healthcare.

On a sunny afternoon, huge crowds rallied at four points across the capital and marched on city hall in a mass protest under the slogan: "Madrid rallies in support of public healthcare and against the plan to destroy primary care services".

Primary care services in the Madrid area have been under huge pressure for years due to a lack of resources and staff, with the situation worsened by poor regional management, unions say.

A regional government spokesman said there were 200,000 people out on the streets, but organisers gave a figure three times higher, saying 650,000 demonstrators had joined the protest.

Aerial shots over the main boulevards leading to City Hall showed a vast sea of protesters surging in from all directions.

"Your health should never depend on your wallet," read one huge green banner, while others read: "Health care is not for sale, it must be defended" as thousands of voices demanded the resignation of the region's right-wing leader Isabel Diaz Ayuso.

The protest convened by local associations and municipalities took aim at the health policies of Ayuso's regional government, its push for public-private healthcare partnerships and its restructuring of the primary care system.

The protest comes ahead of a planned strike by nearly 5,000 regional family doctors and paediatricians scheduled for November 21, due to "the overload of work, endless appointments and lack of time with patients".

They will join an earlier strike by medical staff over the new model for non-hospital emergency centres, which have seen some offering only video consultations due to a lack of staff.

Spain's left-wing government threw its weight behind the protesters, with cabinet minister Felix Bolanos saying the crisis was due to the "disastrous management" of public healthcare by the regional government which is run by the right-wing opposition Popular Party.

"Madrid is the region that invests least in health per inhabitant. The national average is 1,700 euros per inhabitant, and in Madrid it is 1,300 euros," he said.

"It's the region with the least doctors and nurses per inhabitant."

Speaking to reporters at the rally, Monica Garcia of the hard-left Mas Madrid party said the regional government was destroying the public health system.

"What they are doing is an unprecedented disaster," she said.

"Ayuso needs to step up, listen to this demonstration and take political responsibility: either her health minister goes or she goes, or the whole Popular Party government goes" she said.

"There is a very simple way to retain professionals and that is to treat them well: give them contracts that are not just for a month, a week, a weekend. When a government is incapable of doing this, it is because there are political interests at work."