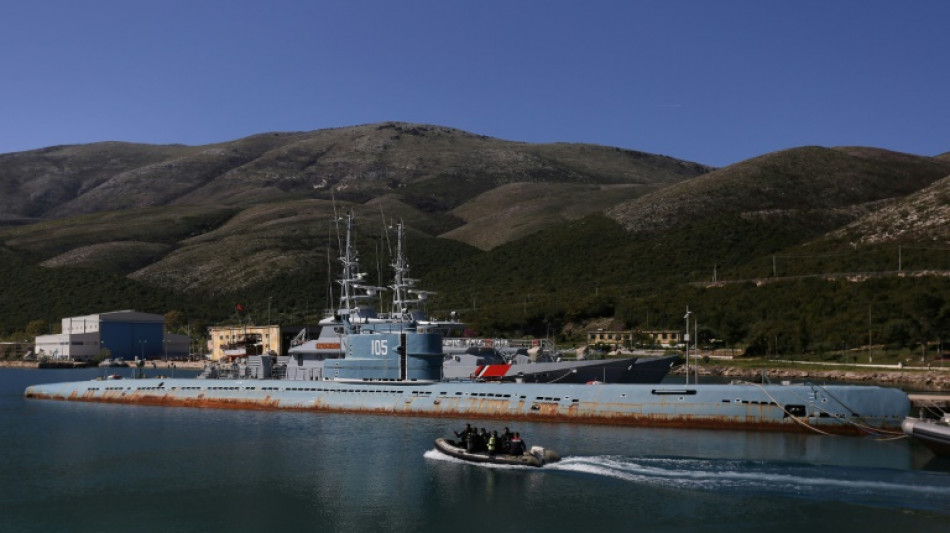 Retired sergeant Neim Shehaj spends his days repairing a Soviet-era submarine, a witness to Albania's tumultuous communist past that is now rusting, half-submerged, at an Adriatic naval base.

The fate of the Cold War submarine at the Pashaliman base -- from where Moscow once hoped to control the Mediterranean -- hangs in the balance as authorities remain undecided over what to do.

"This submarine is like a church to me... I arrived here as a young sailor and now my hair is grey," Shehaj, 63, who served on it for about three decades, tells AFP.

If the submarine is not taken out of the sea soon "it risks sinking to the bottom, and all its history with it", he warns.

The vessel was part of the so-called Project 613 consisting of the first submarines that the Soviet Union built after World War II.

It is the only remaining one out of 12 that Moscow deployed at the Pashaliman base in Vlora Bay in the late 1950s when Albania and the USSR were still close allies.

"From there I could control the Mediterranean to Gibraltar," retired submarine commander Jak Gjergji recalls Soviet leader Nikita Khrushchev as saying in 1959 during a visit to the base.

Khrushchev hoped to install long-range missiles, warships and an airport at the base in Albania's southwest.

That complicated matters for the mixed Albanian-Russian submarine crews.

"The sailors of the two countries no longer spoke to each other and incidents were frequent," recalls the 87-year-old Gjergji.

"When a Russian sailor wanted to raise (his country's) red flag with the hammer and sickle, an Albanian one immediately tore it with rage."

After the 1961 split between Tirana and Moscow, the latter recalled eight submarines.

In 1997 almost a decade after the fall of communism, as unrest swept Albania after several bogus savings schemes collapsed, the base was looted and submarines were stripped of their weapons, engines and even the sailors' beds.

The authorities dismantled three of the four remaining submarines and sold them for metal in 2009.

Just one survived -- thanks to literature.

Albania's most famous writer Ismail Kadare in his 1973 novel "The Winter of Great Solitude", about the break between Moscow and Tirana, arbitrarily assigned the submarine the number 105.

"This is the only number that came to my mind while I was writing" the novel, Kadare tells AFP.

"Ever since, the submarine is known by this number. It is also thanks to this number... that it is alive today!"

Through the book, the sub's historical notoriety and cultural significance took on symbolic value.

Its fame was further cemented when a film based on the novel was made, for which the number 105 was painted on the submarine and still remains.

But its survival is also largely down to the determination of Shehaj, who for years has been refurbishing the 76-metre (250-foot) submarine, its electrical network, ventilation system, command post and torpedo room.

He tends to the tiniest of details, while also filling holes in the hull to stop the submarine from sinking for good.

"The authorities have to decide quickly what to do with it, the risks are major, the sea water accelerates the corrosion considerably," the 63-year-old warns.

The culture ministry, which pledged for years to restore the submarine, told AFP that it would "forward the file" to the defence ministry, which could include it in a future Cold War museum.

Albania embraced the West after the fall of communism in 1990, joined NATO and aspires to join the European Union.

The base has been of "great importance since antiquity due to its geostrategic position... all maritime traffic in the Adriatic Sea but also in the Mediterranean can be controlled" from it, flotilla commander Sabri Gjinollari says.

At the nearby base of Porto Palermo, an abandoned vast anti-atomic submarine tunnel, dug into the rock in the late 1960s, was intended for Chinese missile boats that never arrived.

Hoxha broke ties with Beijing in 1978 and the tunnel, accessed by AFP, was used for a while as a shelter for submarines and other vessels.

Now, a giant red star painted on a dilapidated wall is the only hint of its past under communism.

Some would also like the site, in one of the most beautiful corners of the Albanian coast, to be turned into a museum.

"We would prefer it to be used by the army, even in a reduced capacity."