Deutsche Tageszeitung - Biden hits back on abortion, calls Supreme Court 'out of control'

Biden hits back on abortion, calls Supreme Court 'out of control' 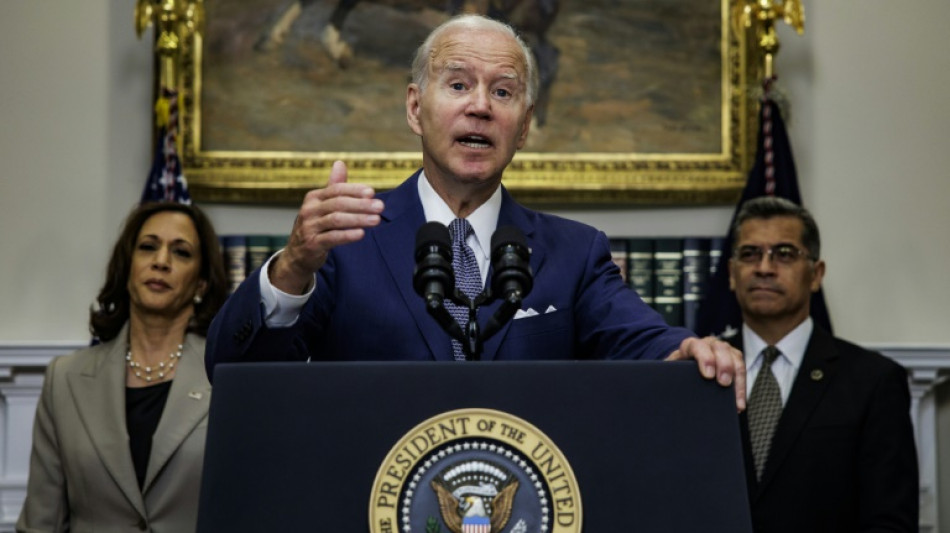 Biden hits back on abortion, calls Supreme Court 'out of control' / Foto: © AFP

Condemning the "terrible, extreme" decision by the Supreme Court to remove the constitutional right to an abortion, Biden said the most effective response would be made at the ballot box in the November mid-term elections by electing lawmakers to give him firm control of the legislature he now lacks.

"The fastest route to restore Roe is to pass a national law codifying Roe, which I will sign immediately upon its passage at my desk. We cannot wait," Biden said, referring to the 1973 Roe v Wade ruling that established the right to abortion.

"We cannot allow an out of control Supreme Court working in conjunction with extremist elements of the Republican Party to take away freedoms and our personal autonomy," he said.

Biden has been criticized from within his own Democratic Party for perceived inaction since the Supreme Court ruling on June 24.

After the court ruling, several states have banned or severely restricted abortion and others are expected to follow suit.

Many Democrats, often speaking anonymously in the press, have complained that Biden and his team have failed to respond adequately to the bombshell judgment by the Supreme Court.

On the day of the ruling, the administration seemed caught off guard even though a draft had been leaked weeks before.

The president announced two packages of regulatory measures on June 24: on access to abortion pills and the rights of women to travel to another state for an abortion if their own state bans the procedure.

But, in a rare move, press secretary Karine Jean-Pierre cancelled her daily briefing on the day.

Biden left shortly after on a trip to Europe, frustrating abortion-rights activists and lawmakers who were eager for more decisive action from the president.

Advocacy groups are warning of the risks posed by women's online data such as their geolocation and apps that monitor their menstrual cycles, which they say could be used to go after women who have had abortions.

Biden's order also seeks to protect mobile clinics deployed to the borders of states that have banned abortion.

The administration also wants to guarantee access to contraception and abortion medication and set up a network of volunteer lawyers to help women on abortion issues, the White House said.

But these measures will have limited effect. Biden cannot do much to battle the Supreme Court or states hostile to him when he lacks a solid majority in Congress.

So Biden is calling on Americans to turn out in droves and vote Democrat in the midterm elections.

The goal is to codify the right to abortion as a federal law, which would nullify state decisions to ban the procedure.

But many Democrats fear this drive to get out the vote will flop. Biden is now an unpopular president and Americans' biggest worry these days is sky-high inflation.

And beyond the abortion issue some Democrats wonder if Biden, 79, a centrist who shuns headline-grabbing action, has the ability to take on an aggressively conservative American right in an era of acute political tension.

All he has to do is look at press editorials of recent days, including ones in news outlets seen as sympathetic.

"Is Joe Biden the wrong president at the wrong time?" read a headline Thursday in The Washington Post, while The Atlantic magazine asked "Is Biden a Man out of Time?"