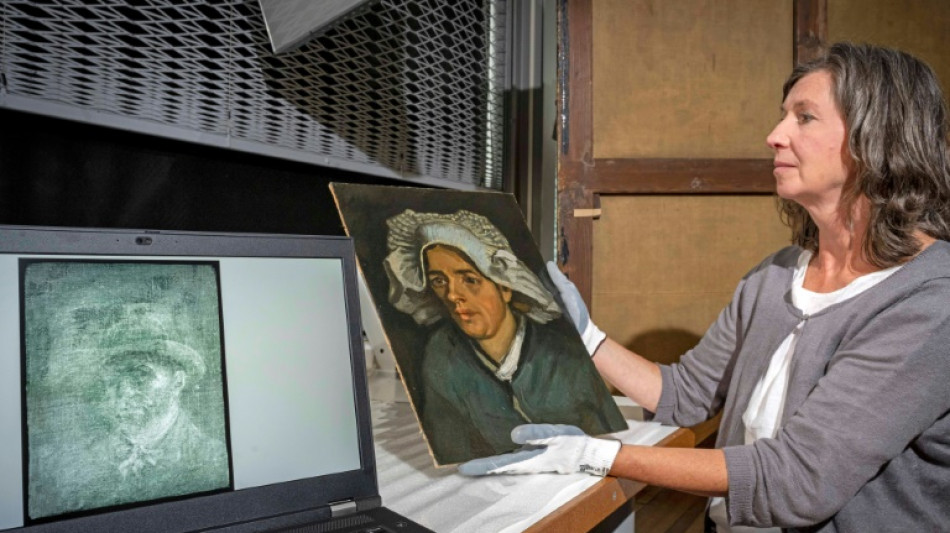 A gallery in Scotland said Thursday it was "thrilled" to announce the discovery of a previously unknown self-portrait of Vincent Van Gogh, with his ear intact, hidden behind another painting.

The portrait was found on the back of the canvas of "Head of a Peasant Woman", an 1885 work by the Dutch post-Impressionist, covered by layers of glue and cardboard.

It shows a bearded sitter in a brimmed hat with a neckerchief tied loosely at the neck. It was completed before Van Gogh cut off his left ear in 1888.

Visitors to the National Galleries of Scotland in Edinburgh will be able to see it at a forthcoming exhibition, as an X-ray image through a specially designed lightbox.

Longer term, curators are working on safely extracting it from the overlaying canvas without damaging the paintings.

Lesley Stevenson, senior paintings conservator at the National Galleries, said they were "thrilled to bits" at the find.

"When we saw the X-ray for the first time of course we were hugely excited," she said.

"This is a significant discovery because it adds to what we already know about Van Gogh's life.

"There is lots to think about with regards to the next steps, but for us it is another little nugget to get us a little bit closer to an incredible artist."

- Cardboard stuck on it -

Curators believe the painting, which was only sold after his 1890 death by suicide, is one of a series of experimental self-portraits.

Van Gogh, who was unknown and penniless when he died, often painted on both sides of a canvas in order to save money.

The main painting was gifted to the gallery in 1960 by Edinburgh lawyer Alexander Maitland, and depicts a local woman from a town in the southern Netherlands where the artist lived from 1883 to 1885.

The self-portrait is believed to have disappeared from public view in around 1905, when it was deemed the less finished of the two pieces and had cardboard stuck on it before being framed.

The uncovered work is believed to date from the period when Van Gogh first encountered the work of the French impressionists. He later adopted the expressive, colourful style that has made his works among the most famous in the world.

The artist suffered from depression, and cut off his ear with a razor shortly before Christmas 1888 after suffering from what the hospital called "acute mania with generalised delirium".

He was able to walk and find medical help, but nobody could remove the bullet and he died two days later from an untreated infection.

According to his brother Theo, his last words were: "The sadness will last forever."