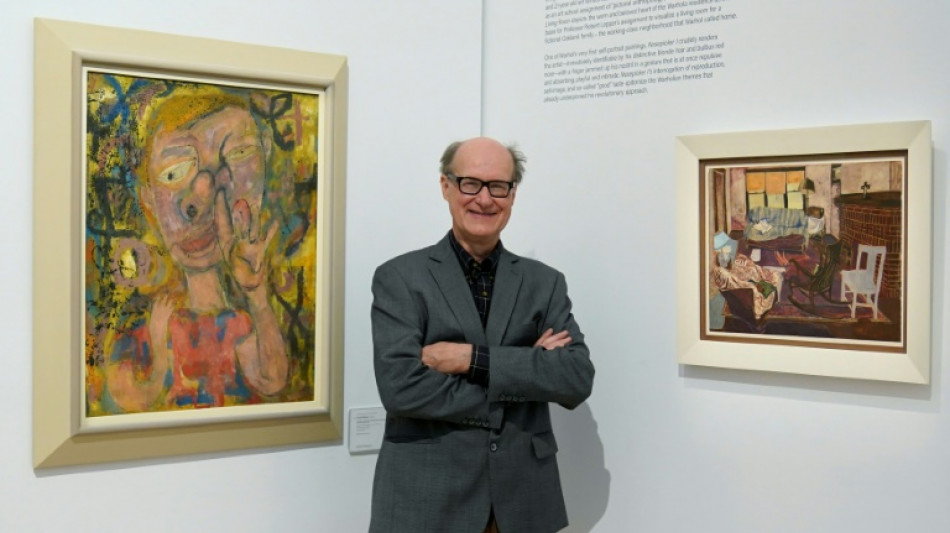 Andy Warhol's nephew will put two works by his late pop artist uncle on the market for the first time Tuesday in New York, with both expected to sell for hundreds of thousands of dollars at auction.

The two paintings were created when Warhol, the son of a working-class family of Eastern European immigrants, was a 20-year-old art student in his native Pittsburgh, Pennsylvania.

The self-portrait "Nosepicker 1: Why Pick on Me" and "Living Room," both from 1948, will be auctioned off Tuesday evening at New York's Phillips.

Warhol's much more famous "Shot Sage Blue Marilyn," which shows the likeness of iconic actress Marilyn Monroe, was auctioned off in May for $195 million -- a record for 20th century artwork.

"These two paintings have been in the family for over 70 years. And we've enjoyed them for many years," said James Warhola, the 67-year-old nephew of artist, illustrator and filmmaker Warhol, who died in 1987.

Warhola's father was the older brother of Warhol -- who chose to drop the "a" from his last name.

"My parents have passed, so it's time that we will be selling them and splitting the proceeds" Warhola told AFP, noting he has six siblings.

The youthful self-portrait of Warhol with a finger up his nose, as well as the painting of his Pittsburgh living room, have been exhibited several times around the world, but nearly vanished.

According to Phillips, in the late 1970s the Warhol family had their car stolen with the two works inside.

"Fortunately for the family and for art enthusiasts across the globe, the car was recovered, with the artworks completely unscathed," the auction house said.

These early Warhol works are not expected to reach anywhere close to the soaring price of the Marilyn Monroe pop art image sold last May 9 at auction.

"We cannot believe that his artwork has become so valuable," Warhola told AFP.

"In fact, I think my uncle Andy would be, like, flattered."