Horseman and hero: Who is Argentina's 21st century gaucho? 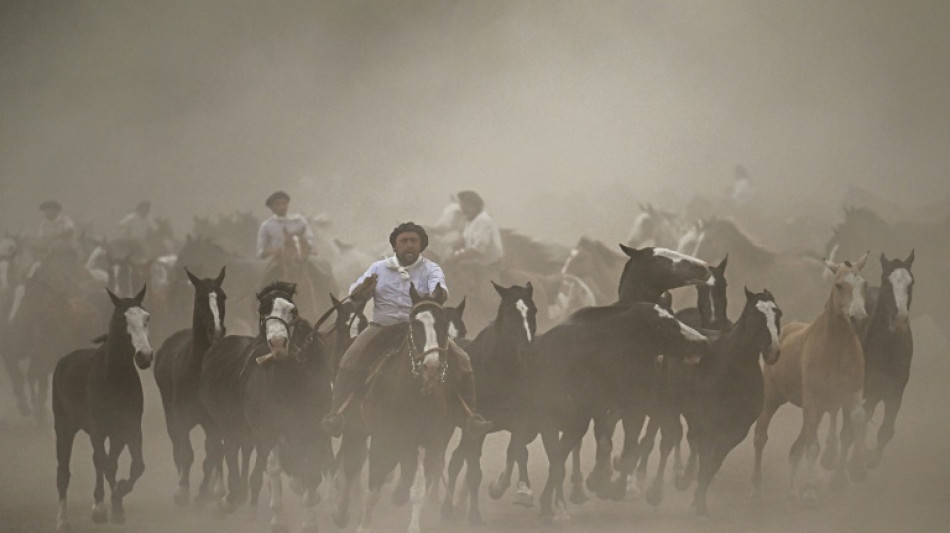 Riders in berets, espadrilles and traditional neck scarves stand out against a dust cloud enveloping a melee of hundreds of horses as they expertly herd the animals.

The riders are gauchos, deft horsemen who occupy a special place in the Argentine psyche, somewhere between legend and reality.

Every year, thousands of people from all over the country flock to San Antonio de Areco for the Festival of Tradition on December 6.

The city is just 120 kilometers (75 miles) from the capital Buenos Aires, but a different world altogether -- a world of horses, pampas (grassland plains) and gauchos who wear daggers in their belts and play folk songs on guitars around campfires.

Every December 6, Argentina celebrates its national day of the gaucho.

And 2022 is special, marking 150 years since the publication of the poem "El Gaucho Martin Fierro" by Jose Hernandez -- a 2,314-verse ode to Argentina's version of the cowboy.

Translated into dozens of languages, the poem tells the melancholic story of a 19th century gaucho, including his life of nomadic freedom in the expansive pampas and the discrimination he suffered due to his mixed-race origins.

Rebelling against authority and the advance of the city and fences, the character is a cattle thief and brawler.

He is also courageous, loyal and generous, making the gaucho "a kind of rebel 'avenger' in the minds of the poor classes," historian Ezequiel Adamovsky of Argentina's CONICET research council told AFP.

The poem sparked a romanticized obsession with the Argentine horseman and a literary genre that saw dozens of gaucho-themed books "devoured" by rural and working-class readers in particular, he said.

Years later, under a conservative government, Fierro received an extreme makeover, with the anti-establishment rebel becoming a patriotic figurehead of the military, no longer just a popular idol.

Then, at the start of the 20th century, Fierro became white in the retelling of his tale rather than of mixed race.

It was a time that "the elites of the nation pushed the outlandish but enduring vision of a white, 'European' Argentina," said Adamovsky, an expert on how the image of the gaucho has been massaged through history even as it was elevated to a national symbol.

In Adamovsky's Spanish-language book, "The Indomitable Gaucho," the subtitle calls the gaucho "the Impossible Emblem of a Torn Nation."

Many sectors of Argentine society grasp the gaucho as a symbol. Anarchists rejecting state authority, communists fighting the class struggle, "Peronists" representing the demands of rural workers and nationalists have all since claimed the gaucho for their own.

In San Antonio de Areco, modern-day gauchos herd horses and break them in, showing off their skills to adoring crowds in a world far from folklore and fantasy.

Well-kept horses are mounted with ease by children and octogenarians alike.

"The gaucho, the man of the field, continues and will continue to exist," said Victoria Sforzini, the city's director of heritage.

"It is impossible to replace the work done on horseback," she said, noting that with the territory's diverse topography and vegetation, "there are places where cars cannot go."

Are they the riders who perform for tourists on day-long excursions from Buenos Aires? Are they the rural workers who still ply their trade on horseback today?

Or are they like gaucho-descendant Julio Casaretto -- a suburban mason who makes sure to go riding with his little girl on weekends.

"Even if the fields recede, even if everything gets lost a little, it is in our blood," he said.