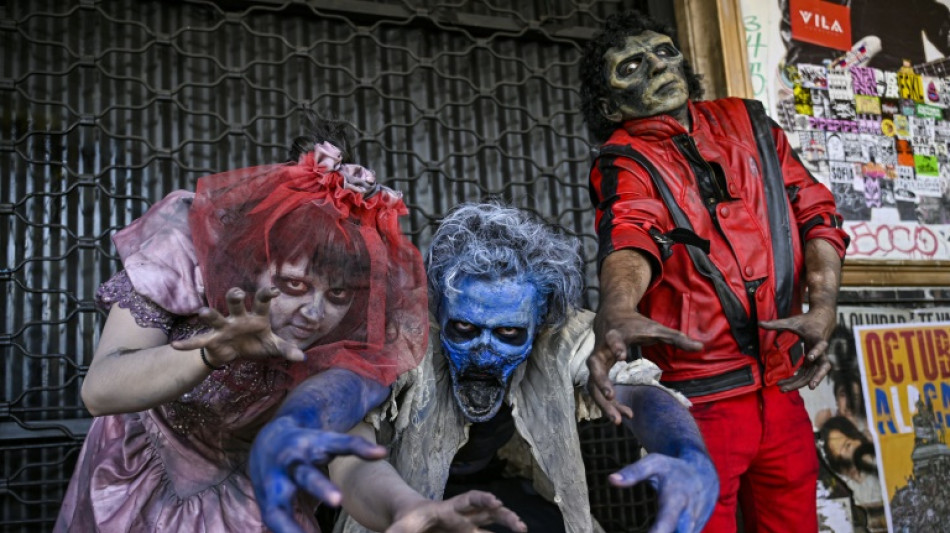 There's no red carpet, glitzy awards ceremony or even a real cinema but UK film festival Horror-on-Sea, now in its 10th year, has carved a niche promoting independent movies that don't make the mainstream.

"We decided from day one that there is no point in trying to copy all the big horror festivals," its director Paul Cotgrove, who founded the event in 2013 in Southend-on-Sea, told AFP.

"In the wintertime, it's dead," he said of the popular seaside resort, famous for its amusement arcades and pier that extends 1.3 miles (just over two kilometres) into the River Thames estuary.

"I thought, let's just look at the brand new independent horror films, the ones that actually probably don't get into bigger festivals because they're not polished, they're a little bit rough around the edges."

For two weekends every January, the convention meets at a sprawling seafront hotel that would otherwise be shorn of guests in the winter months of the tourist off-season.

Since it started, the festival has become a reference point for a niche genre of mainly self-funded B-movies.

This year, the festival is showing 36 feature films and 44 short films selected from hundreds of submissions over six days until January 22.

The specialist US website Dread Central last year ranked Horror-on-Sea among the best in the world, alongside others in Chile and Beijing, and Sitges in southern Spain.

On the cold, empty streets of Southend, there's nothing to suggest a world-renowned film festival is taking place.

Delegates mill about the hotel in film T-shirts and costumes.

"It's a really loyal audience that will forgive the low-budget film-making if it's got a good script," said Dani Thompson, who appears in six of the films being shown.

Debbie Blake, a 49-year-old wind turbine company employee, has become a regular and attended the last four editions "because of the new films that you don't get to see anywhere else".

She watches six feature films a day for six days, despite the uncomfortable chairs, simple video projection system and a microphone that regularly fails when a director introduces their work.

Instead, anyone can chat with filmmakers, directors, screenwriters and actors at the bar overlooking the churning North Sea, to discuss ideas and even hatch new projects.

More than one of the films on show began life this way, including director Mj Dixon's "Slasher House" series.

"In 2013, the first festival put on our first feature film, when no one else was really interested because it wasn't a mainstream film and that really launched my career," said Mj Dixon.

Dixon has since directed a dozen more feature films and won prizes in other competitions.

Italian Christian Bachini's short film "Escalation" has already been screened around the world but he's happy to show it at Horror-on-Sea because of its reputation.

The festival has a "world premiere" every night. Sometimes the films have only been finished a few days before.

Most are by British or American filmmakers although this year includes a screening from Brazilian director Gurcius Gewdner.

Many international directors don't make the trip to the hinterland east of London because they have to pay for the trip out of their own pocket.

The shoestring horror industry -- notorious for gore, crude black humour and sexist stereotyping -- has proved itself much more agile in responding to crises than mainstream cinema.

"Last year, a lot of the films that were submitted were all to do with Covid," said Cotgrove.

"Low budget filmmaking people are more creative because they haven't got a lot of money and they were all suddenly thinking, 'if we go out on the streets, there's no people so we can make a film up about empty streets and it's free'."

Just as George A. Romero's "Night of the Living Dead" (1968) was "an allegory for societal change and segregation and things like that", horror films often reflect contemporary society, said Dixon.

But he added: "I think there's a lot of escapism to horror especially in the world we live in. Those uncertainties that exist in society."

For Blake, the message is simple in a real world blighted by war and the cost of living crisis. "Try and forget about it all and just watch the movies," she said.