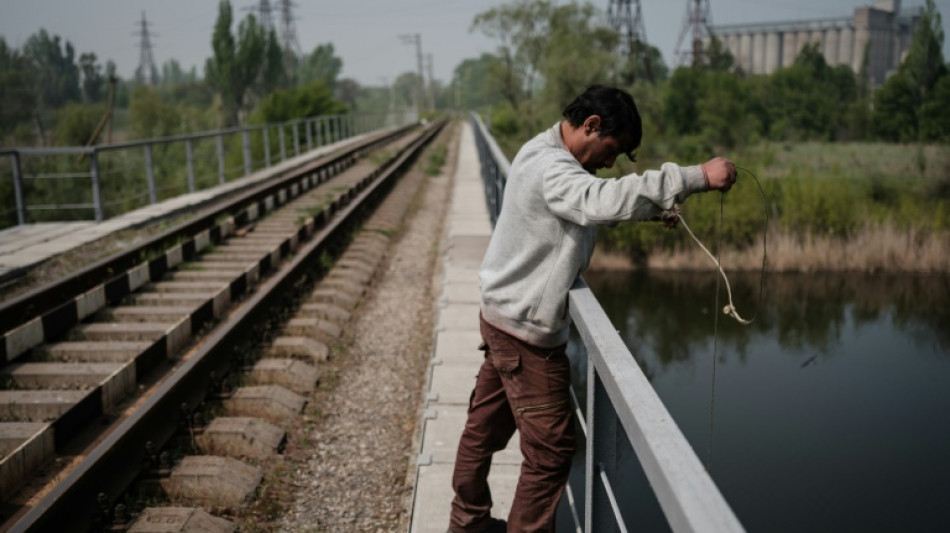 Ukrainian fisherman Artur Cherepovskiy knows it has been a bad day at the front if he fails to catch any carp from a river running to the hills hiding the Russians.

The 32-year-old lowers a net down a rope from a railroad bridge overlooking the Kazeniy Torets River and hopes the thuds rolling in from the horizon will not scare his dinner away.

"They get frightened when there is shelling. It has to be silent when you fish," he says, shaking his head at the endless battles raging on Ukraine's eastern front in the third month of Russia's invasion.

"I used to be able to catch five or six good ones the size of your palm in a day. And now, in wartime, I might not catch any at all. It depends on how strong the bombing is. When it gets really loud the fish swim to the bottom."

The seizure of Slovyansk by Russian-backed insurgents in 2014 set off years of battles that culminated in an all-out invasion by President Vladimir Putin's forces on February 24.

Ukrainian troops managed to recapture the city and then set up an administrative centre for the eastern conflict in neighbouring Kramatorsk in 2014.

Both are now targets of a Kremlin offensive that has clawed away chunks of Ukrainian territory -- but failed to deliver the knockout punch Putin may have sought in time for Russia's annual Victory Day celebrations on Monday.

Cherepovskiy's bad catch hints at both the resolve of Ukraine's resistance and the strength of Russia's determination to reverse its neighbour's decision to tie its future to the West.

The Kazeniy Torets winds around farms and forests until it folds into another river demarcating Russian and Ukrainian troops.

The Russians have been trying to push south past this web of rivers and then advance further on to Slovyansk and Kramatorsk.

The Ukrainians have countered by ferrying their strongest units from one hotspot to another to make sure the Russians are unable to establish a bridgehead on their side of the river divide.

Many of these soldiers have dirty uniforms from nights and days spent under bombardment from Russian warplanes and incessant volleys of Grad and Uragan rocket fire.

"It makes you reassess everything you have taken for granted in your civilian life," Ukrainian soldier Barada -- a nom de guerre he earned for his bushy beard -- said while watching a group of soldiers roll off toward the flaming front.

"Your mentality switches when you jump in an armoured vehicle. Your priority becomes staying alive."

Barada's group of men were lounging in the shade of a picket fence while waiting their turn to be called in to defend Siversk -- the latest of the tiny frontline towns teetering on the edge of near-total destruction.

Former Siversk collective farm worker Lyubov Baidykova stepped out of her gated garden to catch a few glimpses of Russia's assault on her town of 10,000 miners and crop growers.

She could see dark smoke rising for the fourth day from a large grain refinery that caught fire during a battle near the town's train station.

Her own house was shelled once in 2014 and again this month.

"My nerves are made of steel these days," she said after another big bang set her startled dog barking at the smoke-tinged air.

"I do not even react when the jets buzz by. They flew by three times today and I couldn't care less. I am just sick and tired of it all."

Rows of houses a few dirt roads down from Baidykova's simple home stood in ruins.

A cemetery near a patrol station that witnessed one battle had a patch of graves smashed apart by a rocket or mortar shell.

Houses that were still standing had no gas or power. The water meekly dripping from the tap was far too weak to shower or do the washing up.

"I can't leave because of my financial situation. So I live with the bombings, day and night. This is how I live," she shrugged.