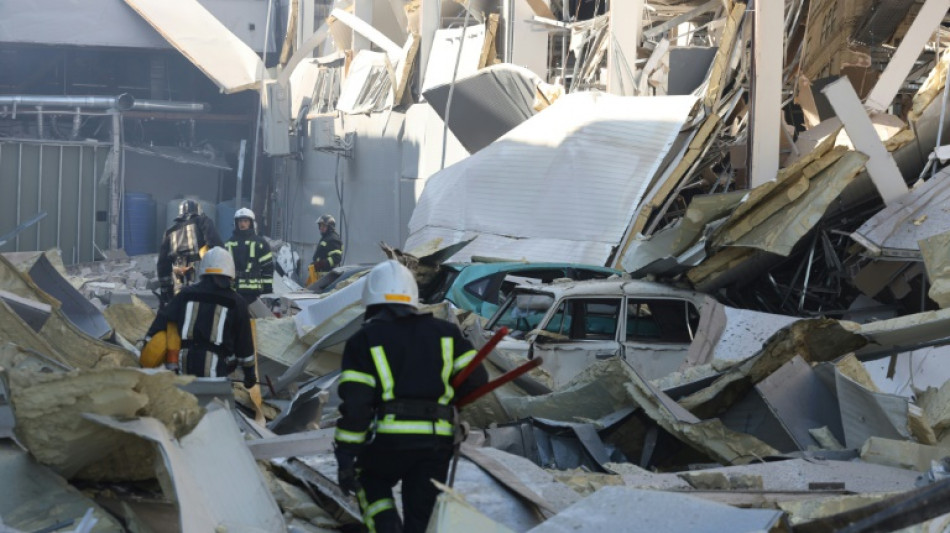 The port city of Odessa reeled on Tuesday from Russian missile strikes as Germany's top diplomat became the highest-ranking official from Berlin to visit Ukraine since Moscow's invasion.

German Foreign Minister Annalena Baerbock's surprise visit to Bucha, a town outside Kyiv where Russian troops have been accused of war crimes, came amid mounting criticism of Berlin's slow response to the conflict.

Fresh fighting raged in the east and south of Ukraine, with officials saying over 1,000 Ukrainian fighters including hundreds of injured remain holed up in the besieged Azovstal plant in the devastated city of Mariupol.

The series of missile strikes in Odessa overnight destroyed buildings, set ablaze a shopping centre and killed one person, just hours after a visit by European Council President Charles Michel.

Michel had earlier warned that vital supplies of wheat and grain that were ready for export from Ukraine, one of the world's key producers, were stuck in Odessa because of the conflict.

"This badly-needed food is stranded because of the Russian war and blockade of Black Sea ports causing dramatic consequences for vulnerable countries. We need a global response," he added.

A string of Western officials have been visiting Ukraine in recent weeks, but Germany has been notable by its absence due to tensions between Kyiv and Berlin over the level of German support.

German Chancellor Olaf Scholz in particular has come under fire for arms deliveries to Ukraine deemed insufficient and Germany's refusal to ditch its reliance on Russian energy imports.

But the visit of Baerbock was intended as a clear signal, with the foreign minister meeting residents in Bucha, one of several towns and villages around Kyiv where Moscow's army has been accused of killing civilians.

The German was accompanied by her Dutch counterpart Wopke Hoekstra, who visited the devastated commuter town of Irpin, he said in a Tweet.

Russia has stepped up its fight to seize Ukraine's east after failing to take Kyiv, leading to fierce battles.

Ukraine's presidency said the "epicentre of the fighting has moved" to Bilogorivka in the Lugansk region, the site of a deadly Russian air strike on a school on Sunday that Ukrainian officials said killed 60 people.

Shelling also continued in Ukraine's easternmost strongholds, the sister cities of Severodonetsk and Lysychansk, it said. An AFP team had seen columns of Ukrainian trucks moving away from Severodonetsk on Monday.

Civilians were struggling to survive between the constantly shifting front lines.

"I feel total apathy. I am morally starved -- not to mention physically," said bricklayer Artyom Cherukha, 41, as he collected water trickling from a natural spring in Lysychansk.

He was trying to get supplies for his family of nine, as people in the areas steadily lose access to water and food.

Moscow has made more progress in southern Ukraine but "more than a thousand" Ukrainian soldiers remain in the Azovstal steel works in the port of Mariupol, Deputy Prime Minister Iryna Vereshchuk, told AFP.

The plant is the final bastion of Ukrainian resistance in the city, which has seen relentless destruction since Russian President Vladimir Putin's February 24 invasion.

"Hundreds are injured. There are people with serious injuries who require urgent evacuation. The situation is deteriorating every day," said Vereshchuk.

Many civilians have been evacuated from the plant in recent days, as Russia pushes for full control of Mariupol to open up a land corridor from Crimea, which it seized in 2014.

The United States has sent some $4 billion in military aid to Ukraine already but "caving to aggression is even more costly," Biden said as he signed the act, passed with unusual bipartisan support.

Still facing the brunt of the fighting are Ukraine's civilians.

The Pentagon said Monday it has seen indications that those caught up in Russia's invasion are being forcibly removed from their homeland to camps.

"I can't speak to how many camps or what they look like," Pentagon spokesman John Kirby told reporters when asked about statements from Kyiv that some 1.2 million Ukrainians were being sent across the border and placed in camps.

"But we do have indications that Ukrainians are being taken against their will into Russia," Kirby said. He called these actions "unconscionable" and "not the behaviour of a responsible power."

Moscow said it would not participate in Thursday's special session of the UN Human Rights Council on Ukraine.

The Council announced on Monday that it would hold a special session at Kyiv's request to examine "the deteriorating human rights situation in Ukraine stemming from the Russian aggression".

In another step forward in building pressure on Russia, EU chief Ursula von der Leyen said she made "progress" on a proposed Russian oil embargo during talks with Hungarian Prime Minister Viktor Orban.

Macron, however, suggested building a broader political bloc that could also include Britain, which left the EU in 2020.