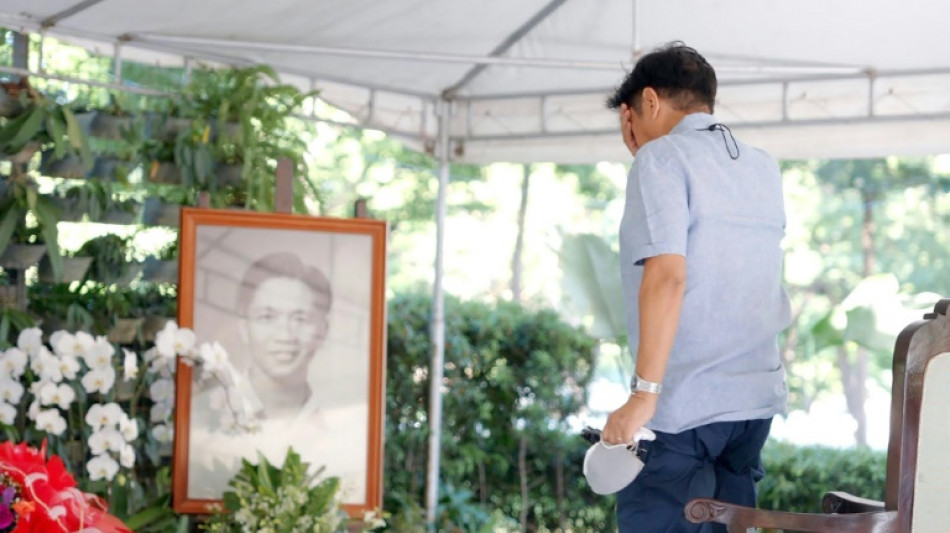 Ferdinand Marcos Junior visited the grave of his dictator father hours after his thumping victory in the Philippine presidential election, his team said Wednesday, posting photos of the intimate moment on social media.

Marcos senior died in exile in 1989, but his remains were only interred in the national heroes' cemetery in Manila in 2016 after President Rodrigo Duterte defied public outcry to order their burial with full military honours.

Marcos Jr, popularly known as "Bongbong" won Monday's election by a landslideafter a decades-long effort to whitewash the family's past and return them to the presidential palace.

In 1986, the patriarch was toppled from power and the family chased out of the country by a popular revolt involving millions of Filipinos fed up with his brutal and corrupt 20-year rule.

Hours after initial counting showed Marcos Jr with an unassailable lead over his main rival Leni Robredo, he visited his father's tomb.

"The young Marcos is grateful to the Filipino people for giving him the landslide victory and to his father, who have (sic) been his inspiration throughout his life and taught him the value and meaning of true leadership," the Marcos team said in a statement, describing the son as the "president-in-waiting".

Photos posted on official Marcos social media accounts showed him standing before the oversized tomb with his head slightly bowed and covering his eyes with his right hand, as if crying.

He left a large bouquet of white lilies, carnations and baby's breath on the grave, which is flanked by a bust and a black and white portrait of the dictator.

Another photo showed Marcos Jr sitting in a chair before the tomb as if in contemplation.

Before being interred in Manila, Marcos senior's remains were housed for decades in an air-conditioned crypt in the family's ancestral home in their stronghold of Ilocos Norte.

Marcos Jr has described his father as a "political genius" and portrayed his decades in power as a golden era of peace and economic development.

In reality, he carried out a brutal crackdown on dissent and oversaw massive corruption and the plunder of billions of dollars from state coffers that left the country impoverished.

Assisted by a massive social media misinformation campaign targeting young Filipinos with no direct experience of his father's rule, Marcos Jr was swept to a historic win.

He won more than half of the votes in the election, making him the first presidential candidate to win an outright majority since his father was ousted.

His team has said he will claim victory after the vote counting has finished. A fully certified tally is not expected before May 28.

Marcos's running mate Sara Duterte, the daughter of the outgoing president, also won the vice presidency, which is elected separately, in a landslide.