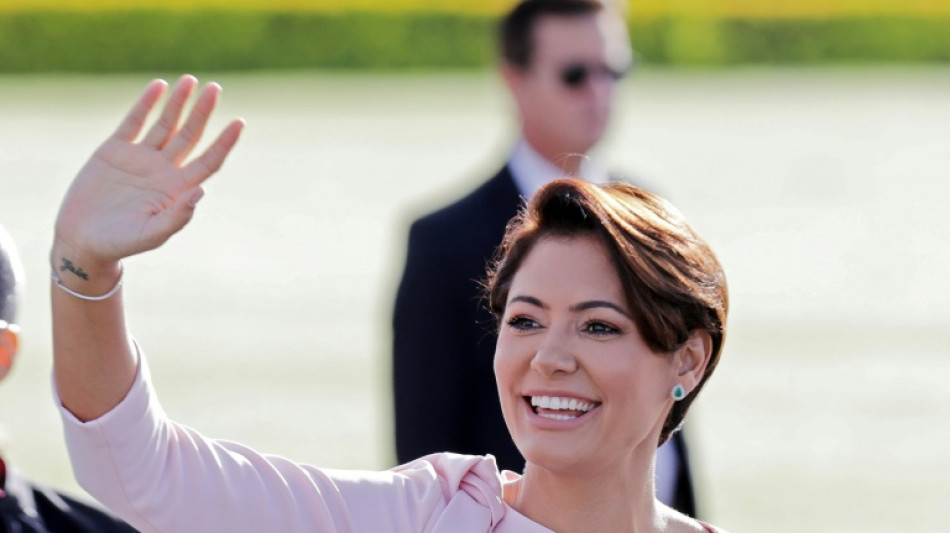 President Jair Bolsonaro has a problem heading into Brazil's October elections: he is unpopular with a demographic that makes up more than half the electorate -- women.

Step in First Lady Michelle Bolsonaro, his telegenic, devoutly Christian and increasingly politicized wife, who is emerging as a powerful weapon in his campaign.

Lula led Bolsonaro by 44 percent to 31 percent in a May 5 poll from research institute Ipespe, for example. Among women, the score was 47 percent to 25 percent.

In his 2018 campaign, the former army captain was the target of a women-led movement called #EleNao -- "not him" -- launched by critics who accuse him of misogyny and machismo.

Forty-year-old Michelle, Bolsonaro's third wife, stayed behind the scenes for most of that campaign.

As first lady she has maintained a relatively discreet style, coordinating a volunteer social program and occasionally giving or translating speeches in sign language, in which she is fluent.

But with the next election looming, she is increasingly stepping into the spotlight, leveraging her bright smile, elegant look and conservative credentials.

Last Sunday she gave a nationally televised address for Mother's Day -- her first as first lady.

"Being a mom is a full-time job... the most divine responsibility of all," she beamed, speaking alongside her husband's minister for women and human rights.

"We are committed to caring for our country's mothers," she said, reeling off a list of measures she said the Bolsonaro administration has taken to benefit women.

Opposition parties cried foul: they filed a complaint accusing Bolsonaro of using the spot as a de-facto ad three months before the campaign officially opens.

The first lady has also shown a knack for going viral on social media, with emotionally charged clips that galvanize her fellow Evangelical Christians -- a powerful, fast-growing group that represents 31 percent of the population.

In December, it was a video of her weeping for joy and holding a celebratory prayer huddle when Brazil's Senate confirmed Presbyterian pastor Andre Mendonca for a Supreme Court seat -- fulfilling Bolsonaro's promise to appoint a "terribly Evangelical" judge.

This month, it was a video of her falling to her knees, crying and praying for God to "heal" Brazil, at a prayer meeting by a caucus of Evangelical lawmakers.

"It's been identified that she has a good image and broad acceptance" among voters, a campaign adviser told AFP, speaking on condition of anonymity.

The first lady met Bolsonaro in 2007, when she was working as a secretary in Congress and he was a lawmaker. She was 25; he was 52 and separated from his second wife.

Bolsonaro, who has four sons from his previous marriages, said he had a "moment of weakness and fathered a girl."

It is one on a long list of what critics call his misogynistic remarks, such as in 2014, when he told a fellow member of Congress she was "not worth raping" because she was "too ugly."

Bolsonaro has tried to brush off his unpopularity with women.

"The polls say women don't vote for me.... But I don't believe in polls," he quipped in February.

But it is no laughing matter to his campaign.

"Women voters are the most difficult group for Bolsonaro, and the one where he has the most work to do if he wants to be reelected," Adriano Laureno, a political analyst at consulting firm Prospectiva, told AFP.

Bolsonaro, a conservative Catholic, faces an uphill battle to win back Evangelical women in particular.

It is a group that overwhelmingly backed him in 2018, but has been disappointed by some of his hardline policies, such as his aggressive moves to roll back gun control laws.

With her focus on the traditional family, Michelle could prove a key crusader in that fight.