Deutsche Tageszeitung - Ukraine youth seek respite from war where they can

Ukraine youth seek respite from war where they can 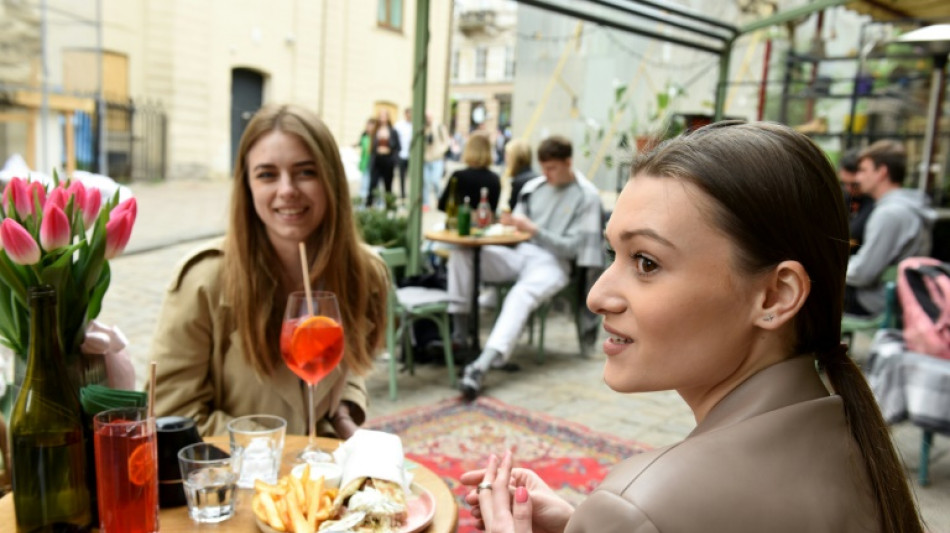 Ukraine youth seek respite from war where they can / Foto: © AFP

Saturday night was always time for the trendy youth of Lviv to sip cocktails on the terrace or lose themselves in the rhythms of the basement DJ at "People Place".

Yet while the nightlife on offer to urban cool cats ostensibly caters to typical young adult tastes, some customers are in contrast seeking refuge from the war on their doorstep which has shattered normality.

In almost three months of conflict, Lviv, some 70 kilometres (45 miles) from the Polish border, has not experienced the destruction of large swathes of Ukraine's east.

Yet the city has just suffered its first air strike in more than a week -- and the shadow of the war hangs heavy over a city of some 700,000 which has seen major inflows of refugees from areas hit by fighting.

Saturday night is therefore a chance for young residents to seek respite where they can and enjoy the rising temperatures of early summer while teasing out a semblance of pre-war "normality" in clubs, eateries and watering holes.

Cradling a Spritz cocktail at "People Place", 25-year-old Bohdan Sharhulenk drinks in a moment's calm a month on from his own arrival in Lviv after the hellish experience of seeing his southern hometown of Mykolaiv, near the frontline, bombarded.

"It's very hard to have a normal life when you know your friends are fighting with the Russian aggressor," he explains, dragging nervously on a cigarette.

But, he adds, "it's important to party, your mind can relax.

Since his arrival in town he has spent several evenings with a clutch of acquaintances from across the country -- most of that time spent in houses or apartments as the city is subject to an 11 pm curfew.

Sat nearby at the same venue around a bouquet of tulips are Sofya Romanuyk and Marta Yavorska, both 24.

They are still coming to terms with what they have experienced and their displacement.

Romanuyk, neatly made up and elegantly dressed, says in the early days of the Russian offensive in late February she was so shocked she didn't wash her hair for days.

"Psychologists say that for the first 21 days, it's very hard to live in war, and then it becomes normal," she explains.

Now, I "try to enjoy the good things: just to sit in a cafe, eat, drink, meet friends" -- though she's in no mood to party.

Her friend Marta, who has recently arrived from Warsaw, says it bothered her to see the Poles drinking liquor after Ukraine banned alcohol sales as part of martial law.

Local authorities were afforded some leeway and with Lviv having loosened its ban Marta can chink glasses with Sofia -- even if she feels pangs of guilt in so doing.

"This is terrible that we think war is normal, but life must go on."

He arrived in Lviv from the eastern, battle-scarred city of Kharkiv a month ago.

What he lived through there has scarred him.

Perched on a chaise longue he is not relaxing but bashing away at his computer, trying to make a living from taking punts on cryptocurrencies.

"Nothing is normal. Nothing. Nothing. It's terrible," he says.

Two weeks ago he did venture down to check out the basement DJ and his sound system.

"I saw a real party like we had in Kharkiv before the war. I tried to relax but I could not. I try but I can't."

Oksana Gariacha, 29, has been working at the bar since leaving Kyiv -- but likewise just can't face partying in the current context, despite her love of salsa.

"People are dying, we can't do real hard parties.

"I miss dancing. After we win, I hope we will dance every night until the morning."