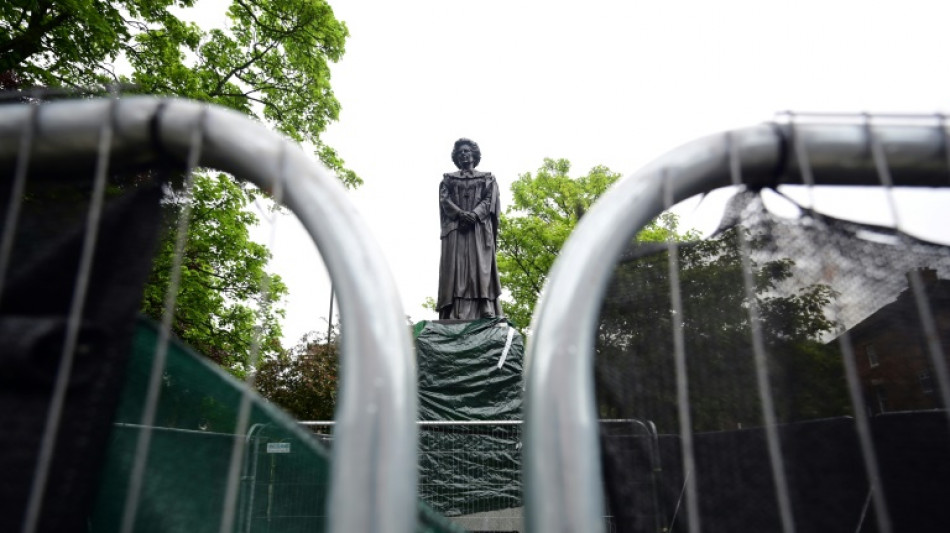 A new statue of Britain's late former prime minister Margaret Thatcher was fenced off on Monday following an egg-throwing protest shortly after it was installed in her hometown.

The Conservative prime minister known as the Iron Lady led the country from 1979 to 1990 and was the first British female premier.

Due to her policies of privatisation, breaking the power of trade unions and selling off public housing she continues to deeply divide opinion, nearly a decade after her death in 2013.

It was originally destined for London but the authorities there rejected a proposed site in a square opposite parliament, over concerns about "potential vandalism and civil disorder".

The small town where Thatcher grew up, Grantham in Lincolnshire in central England, agreed to take the statue instead.

Local newspaper the Grantham Journal reported that the bronze statue was egged shortly after its installation on a plinth on Sunday.

The Daily Telegraph newspaper posted a picture of a protester throwing an egg at the statue, naming him as Jeremy Webster, an administrator at a local arts centre.

On Monday, the statue was fenced off and had sacking taped round its plinth and inscription, an AFP photographer saw.

The 10.5-foot (3.2-metre) figure shows a big-haired Thatcher in the ceremonial robes she wore in the House of Lords, without her famous handbag.

The local South Kevesten district council backed the statue's installation, hailed by its leader, Kelham Cooke, as "a fitting tribute to a truly unique political figure".

Labour councillor Lee Steptoe tweeted after the egg attack however: "I do not condone this but it was absolutely inevitable."

The right-wing Sun tabloid described the egg-throwing protester as a "yob", while left-wing tabloid The Mirror wrote: "Statues should not be defiled but it's no surprise the one to Margaret Thatcher was, just 21 minutes after it was installed".

"Those with long memories of her divisive, cruel rule will wonder how it took so long."

Thatcher's father was a grocer in Grantham. She left to study at the University of Oxford. In the 1980s, university teaching staff voted against awarding her an honorary doctorate.

A bronze statue of her stands in the Members' Lobby of the Houses of Parliament.

In 2002, a protester decapitated a marble statue of her in London's Guildhall.