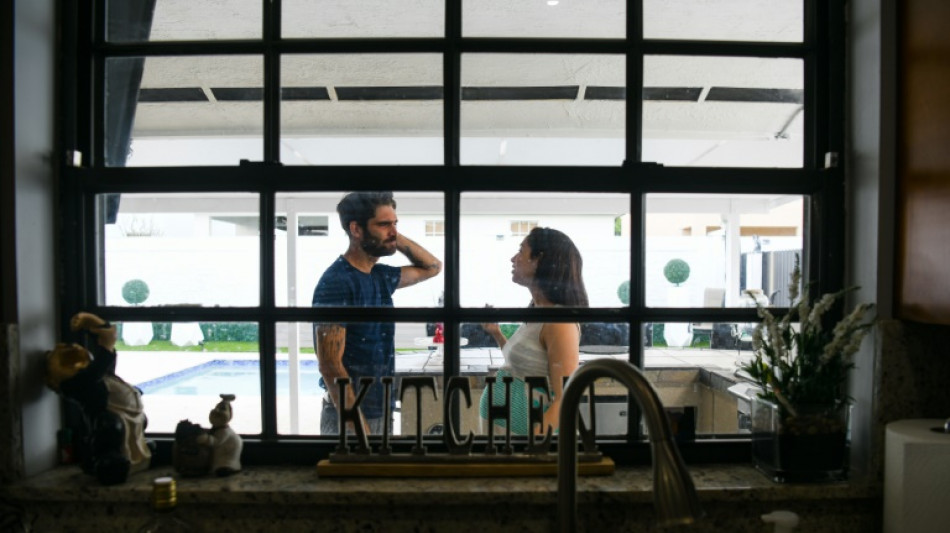 Until recently, Raul Prado and Aidana Hernandez believed in change. Cuba was opening up internet access and there was a whiff of freedom in the air.

But authorities quickly tightened the valve, and the two artists have now joined thousands of other young well-educated people in fleeing the island nation, where an economic crisis has helped erode hope.

"Emigration is an idea that crosses the mind of all Cubans at one point or another," said cinematographer Prado, 35, who has moved to Miami after never previously thinking of emigrating.

Three years ago the couple saw mobile internet broaden their horizons and turn their daily lives upside down, allowing an entire generation to connect to each other and the outside world.

Authorities, however, have since stopped that momentum in its tracks as the country has descended into its worst crisis in 30 years, in part due to the coronavirus pandemic.

The couple's experience embodies that of many well-educated, socially-engaged young people who have given up fighting for a better homeland and chosen exile instead, depriving the ageing country of its emerging talent.

Since Cuba reopened its borders in November following the coronavirus pandemic restrictions, the exodus has been relentless.

Most migrants either fly to Central America and then walk to the US border, or clandestinely scramble aboard boats trying to avoid authorities to cross the Gulf of Mexico towards Florida.

According to US customs, more than 113,000 Cubans arrived in the country from Mexico between October and April.

Sociologist Rafael Hernandez compares it to the exodus of 130,000 people between April and October 1980.

If numbers continue at their current rate, it will become the largest migratory wave in the 63 years since the communist revolution in the country of 11.2 million people.

Emigration "is increasing and amongst that emigration of the young that studied at university," admitted scientist Augustin Lage, a fervent defender of the revolution, in the official press.

Things started to change in December 2018 when Cuba -- one of the last countries in the world to do so -- activated mobile internet on telephones, allowing Cubans greater access to uncensored information and to organize themselves away from prying eyes.

He quickly understood the power of mobile internet and began mobilizing friends and acquaintances on social media to organise aid for those affected.

The couple's tiny 35-square-meter apartment in the Miramar neighborhood of Havana soon became the collection point for food and clothing donations.

It was unprecedented in a country where only the authorities were allowed to act in such a way.

But that was how an informal online network was born, where young Cubans, including many artists, could mobilize freely without state interference.

"After the tornado there were other things" that the group got involved in, said Prado.

LGBT rights, animal welfare, the fight against gender-based violence -- they were active online while also hoping to take their campaigns to the streets.

November 2020 was another watershed moment as the San Isidro activist group published a live Facebook feed of a protest in Havana demanding the release of a detained rapper.

The next day, 300 artists protested outside the culture ministry to demand more freedom of expression.

Among them were Prado and playwright Yunior Garcia, whose boyish looks with oversized glasses made him an instantly recognizable figure for this new generation and its demands.

Taken by surprise, the police let the protest go ahead.

"What happened today was historic," said Garcia at the time, as protesters achieved an audience with ministry officials, although a subsequent promised dialogue was never honored.

But the obstacles soon appeared.

On July 11, 2021, Prado, Hernandez, Garcia and his wife Dayana Prieto, a theatrical producer, were preparing spaghetti and waiting to watch the European Championships football final between England and Italy on the television.

It was a shock to find out that thousands of Cubans were demonstrating in the streets to cries of: "We're hungry!" "Freedom!" and "Down with the dictatorship!"

Once again they joined in, gathering a group of young people to head to the Cuban television institute to demand 15 minutes of airtime to address the country.

This time, though, they were met with repression.

Not only was their request denied but several protesters were violently evicted, thrown in a garbage truck and taken to a police station.

More than 1,000 people were arrested during the nationwide protests, with one person killed and dozens injured as the security forces cracked down on the unauthorized public demonstrations.

Prado and Garcia were released the next day but authorities kept their eyes on the pair.

Garcia created the Archipelago Facebook group calling for a new protest on November 15.

That was thwarted by a huge deployment of security forces on the day, while he was also prevented from leaving his house.

Fearing his freedom would not last long, Garcia and his wife fled to Spain.

He said police told him he would get 30 years in prison if he continued his actions.

"My generation is not afraid, it is angry," said Hernandez. "This anger has turned into pain."

For Prado and Hernandez, the decision to leave came when she found out that she was pregnant.

She did not want to give birth in Cuba.

Prado said he would not have been able to curtail his political activism in Cuba and "it would be irresponsible of me to put" his wife and child through that.

It was not easy, though, since authorities have in recent months prevented many young critics, dissidents, journalists and artists from leaving the island.

Hernandez began her journey, initially to Spain, on January 30 while six months pregnant.

"I had never left Cuba before and I felt really lost."

She received a Schengen visa for one year which allowed her to travel to Mexico on February 11 from where she paid a people trafficker to take her to Mexicali, close to the US border, which she crossed on March 7.

Prado did not need to take the same convoluted route as he already had an American visa.

While Hernandez was traveling, he was finishing work on the Fernando Perez film "Riquimbili o El Mundo de Nelsito."

He also sold their apartment.

"It's really sad. I'm in the process of taking a decision I never wanted to take, that I had always refused to take," he told AFP before leaving.

These young people "feel that they have no future in Cuba," said Perez, 77, Cuba's foremost film director.

"Or to put it another way, they don't want to continue living without freedom of movement ... without spaces to express themselves and to exercise their right to think differently and to protest."

This migratory wave "is the worst thing that can happen to us as a country," said Perez.

Cuba is losing a generation of young people, who may never return.

Some that have tried recently were refused entry.

"Cuba has no choice and must improve its migratory policies," said Antonio Aja, director of the demographics study center at the University of Havana.

That would entail improving relations with the Cuban diaspora, which is often viewed with suspicion by authorities.

"Cuba must not turn them into (permanent) migrants" otherwise "the situation will become untenable."

The island nation already has one of the highest average population ages in Latin America -- 21.6 percent of the population is over 60 -- and given the low birth rate since 2020, it has been surpassed by the death rate.

In Miami, Hernandez has just given birth to a son, Bastian.

"When I look back, when I look at the Cuba I left behind, I'm convinced I took the best decision because at least I feel there are opportunities" in the United States, she told AFP.

But "I will never stop being Cuban, I'm not totally abandoning my country."