Fear and hope under fire in Ukrainian village near Russian border 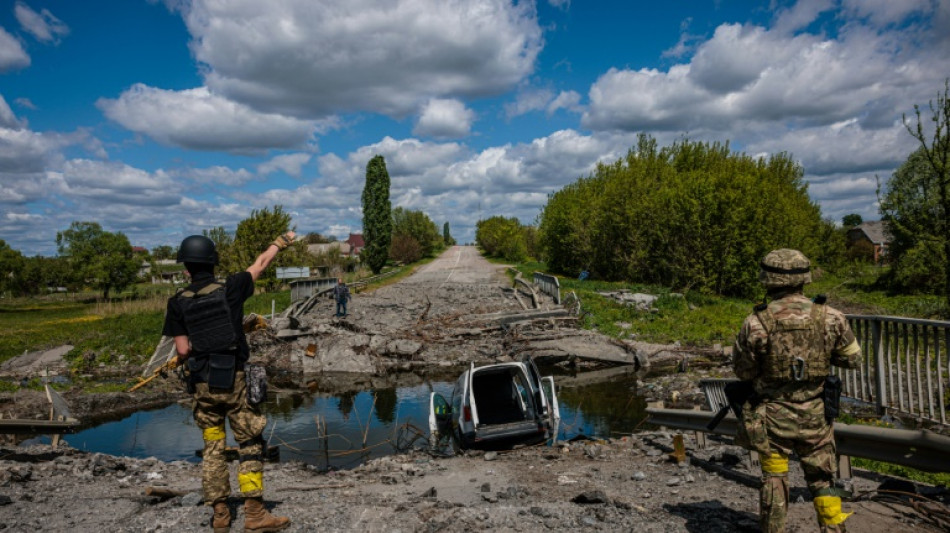 Fear and hope under fire in Ukrainian village near Russian border / Foto: © AFP

Waving his arms in a state of agitation, a man asks Ukrainian soldiers if he can safely cross the remains of a destroyed bridge in the village of Ruska Lozova near the Russian border.

The village, about 18 kilometres (11 miles) from the frontier and just north of Ukraine's second city Kharkiv, was recaptured by Kyiv's forces in late April after being under Russian control for two months.

Trembling, Rostislav Stepanenko struggles to light a cigarette as he recounts how he survived devastating shelling in his village a few kilometres away, caught in the firing line between Russian and Ukrainian forces.

He had gone back to collect some belongings but returned empty-handed and stunned by the incessant artillery fire.

He said a shell struck a neighbour's house and blew out his home's windows.

"I did not care if I would be killed on the way (back) or in my house," he said, so he decided to risk the journey out.

The 53-year-old joked that his profession was "trying to stay alive".

"Hopefully, I will be 54, but today I wouldn't expect that," he said with a nervous smile.

Exchanges of intense artillery fire can be heard from Ruska Lozova and reverberate through people's bodies.

An occasional shell falls a stone's throw from the village, which has already suffered substantial damage, with homes gutted and trees destroyed by the bombs.

Nicolai, 69, said he had a narrow escape during an attack a few days ago.

"I was cutting the grass in the backyard when the missile hit my house and the car," he said, his gold teeth glinting.

His 90-year-old mother refused to leave the village and convinced him to stay with her.

A neighbour still delivers them food and they have enough supplies of canned meat and potatoes to get them through the bombardment that has now lasted more than two weeks.

"I just want the peaceful sky above my head -- and my children to live in a free world."

A green 4X4 full of soldiers races down one of the village's dirt roads. A few minutes later, a civilian SUV leads a troop transport vehicle towards the "contact zone" a few hundred metres away.

The Ukrainian forces seem to be taking advantage of a Russian pullback from the area as Moscow transfers troops from Kharkiv to the eastern Lugansk region.

Ukraine has said it has retaken control of part of its border area with Russia. The defence ministry published a video showing armed soldiers by a border post painted in the blue and yellow colours of Ukraine.

On a road near Ruska Lozova, a sign points towards Belgorod, a Russian city about 50 kilometres away.

Sergiy, a young soldier whose first name has been changed, said he would push the Ukrainian counter-offensive to Russia "with pleasure".

But the little soft toy with large blue eyes he wears on his bulletproof vest is not only to bring good luck.

"It's a gift from my ex-girlfriend. I put it on so they will be able to recognise me if I get blown up," he explained with a morbid chuckle.

In peaceful times, Moscow holidaymakers would travel this road to spend their summers on the Black Sea beaches of Crimea.

Now, a retired couple who had taken refuge in Kharkiv drove back to the village to search their house for "linen and clothing to change, documents, we forgot to take the documents last time".

"It is scary to see, the village was beautiful... and now everything is destroyed," said Semion, 70. "People have also died."

"Nobody was expecting that the war would start. I saw that he (Vladimir Putin) was abnormal 10 years ago. He is not human, I think. How could civilians be killed like that?" he said, mimicking machinegun fire.

"Even if we are elders, we are ready to take up arms and protect the village."