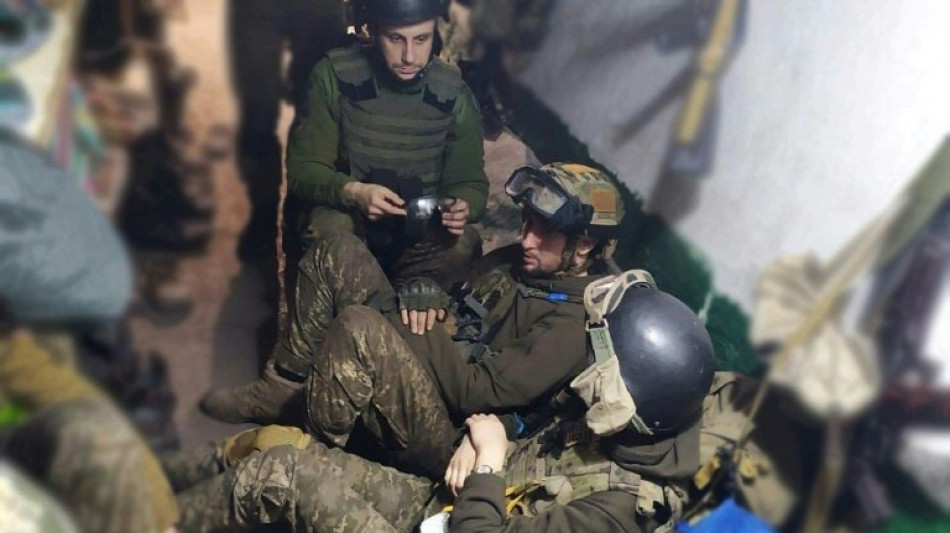 Russia said Tuesday that 265 Ukrainian soldiers had surrendered after staging a last stand at the besieged Azovstal steelworks in Mariupol, prompting Kyiv to call for a prisoner exchange.

Moscow claimed control of the strategic port city of Mariupol last month after a weeks-long siege, but hundreds of Ukrainian soldiers remained holed up in underground tunnels beneath the huge Azovstal industrial zone.

"Over the past 24 hours, 265 militants laid down their arms and surrendered, including 51 heavily wounded," the Russian defence ministry said.

It added that those needing medical help were taken to a hospital in a part of the eastern Donetsk region controlled by pro-Kremlin rebels.

The ministry published images showing wounded soldiers being carried on stretchers, some being searched and others being boarded onto buses.

Elsewhere, lawmakers in Finland -- which shares a 1,300-kilometre (800-mile) border with Russia -- voted overwhelmingly in favour of joining the NATO military alliance.

It paves the way for a joint application with Sweden to be submitted in the coming days, amid fears they could be next after Russia's invasion of Ukraine, which has killed thousands and sent millions fleeing.

Ukraine earlier said 264 fighters from Azovstal were evacuated to Russia-controlled territory, including 53 wounded.

On Tuesday, the defence ministry expressed hope of an "exchange procedure... to repatriate these Ukrainian heroes as quickly as possible".

For those still in Azovstal, it said it was doing "everything necessary for their rescue", although it said a military intervention was not possible.

The fate of the soldiers remains unclear and is likely to cause concern in Ukraine, which has accused Moscow of war crimes during the conflict.

In Moscow, Kremlin spokesman Dmitry Peskov did not answer questions about whether the Azovstal soldiers would be treated as war criminals or prisoners of war.

President Vladimir Putin "guaranteed that they would be treated according to the relevant international laws," he said.

Separately, the speaker of Russia's lower house of parliament, Vyacheslav Volodin, said that "Nazi criminals should not be subject to a prisoner exchange".

He did not mention Azovstal in particular, but Moscow has on numerous occasions said that members of the Azov Battalion -- considered "Nazi" by Russian authorities -- are among those trapped at the steelworks.

Holding the steelworks had delayed the transfer of 20,000 Russian troops to other parts of Ukraine and stopped Moscow from quickly capturing the southern city of Zaporizhzhia, the army said.

"83 days of Mariupol defence will go down in history as the Thermopylae of the 21st century," he said, referring to the famous last stand by the Spartans against the Persians in 480 BCE.

Despite the resources of its giant neighbour, Ukraine has managed to repel the Russian army for longer than many expected, fortified by weapons and cash from Western allies.

After circling the capital Kyiv in the early weeks of the war, Moscow has focused increasingly on the eastern region of Donbas, bordering Russia.

Ukrainian officials say Russian troops are withdrawing from around Kharkiv, the country's second-largest city, to be redeployed to Donbas, and Kyiv on Monday claimed control of territory on the border.

But the area around Kharkiv has been under constant attack and Kyiv's gains have come at a high cost, with villages gutted and destroyed by bombs.

In Ruska Lozova, just north of Kharkiv, Rostislav Stepanenko recounted to AFP how he survived shelling in his village, caught in the firing line between Russian and Ukrainian forces.

He had gone back to collect some belongings but returned empty-handed and stunned by the incessant artillery fire.

Asked what he did for a living, he joked that he was "trying to stay alive".

And his age? "Hopefully, I will be 54, but today I wouldn't expect that," he said with a nervous smile.

In his nightly address on Monday, Ukrainian President Volodymyr Zelensky reported "constant attacks in those areas where Russia is still trying to advance", adding that Severodonetsk and other cities in Donbas remained the main targets.

Taking Severodonetsk, the easternmost city held by Ukrainian forces, would grant the Kremlin de facto control of Lugansk, one of two regions -- along with Donetsk -- that comprise Donbas.

Russia's attempt to completely encircle Severodonetsk has been repelled, with Ukrainian forces blowing up railway bridges to slow their advance.

But Lugansk regional governor Sergiy Gaiday has said it was being shelled "without stopping" and early Tuesday said two buildings at the city's general hospital had been hit overnight.

"We have 10 dead and three wounded in the region," he wrote on Telegram.

Elsewhere, eight people were killed and 12 injured in Russian strikes on the village of Desna, in northeastern Chernigiv region, where a Ukrainian military base is located, emergency services said.

To the west, an official from Lviv's Regional Military Administration said a military infrastructure facility "almost on the border with Poland" had been hit.

Fearful of Russian aggression, Sweden and Finland are poised to give up decades of military non-alignment and join NATO.

Russian President Vladimir Putin said on Monday the move posed "no direct threat for us... but the expansion of military infrastructure to these territories will certainly provoke our response".

Putin's reaction was more moderate than comments made earlier on Monday by deputy foreign minister Sergei Ryabkov, who had called the expansion a "grave mistake with far-reaching consequences".

The bids must be unanimously approved by the alliance's 30 nations, and Turkish President Recep Tayyip Erdogan on Monday voiced his objection.

He accused Finland and Sweden of harbouring terror groups, including outlawed Kurdish militants.

But US Secretary of State Antony Blinken voiced confidence that the bids would succeed.

He is due to meet Turkey's foreign minister in Washington on Wednesday, while US President Joe Biden will host the leaders of Finland and Sweden on Thursday.

Germany, meanwhile, said it would ramp up its military collaboration with the two Nordic countries, especially in the Baltic Sea.