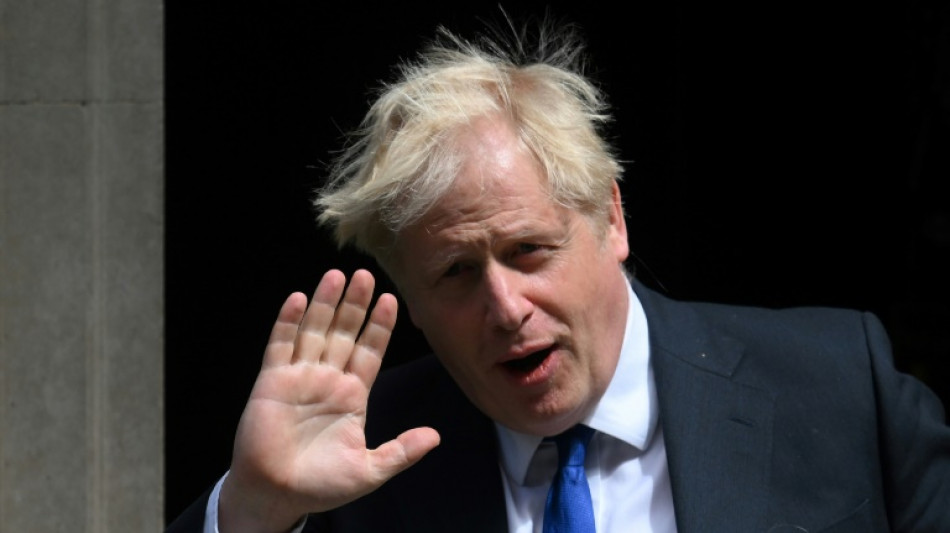 A cabinet delegation had awaited his return from a lengthy grilling by a parliamentary committee to tell him his time was up, according to multiple reports.

It was said to include hardline interior minister Priti Patel and Nadhim Zahawi, who has barely been 24 hours in his new job of finance minister.

But two Johnson loyalists -- Nadine Dorries and Jacob Rees-Mogg -- in the cabinet declared their unstinting support as they also entered 10 Downing Street, and the crisis meeting was still continuing more than two hours later.

The 58-year-old leader's grip on power has been slipping since Tuesday night, when Rishi Sunak resigned as finance minister and Sajid Javid quit as health secretary.

Both said they could no longer tolerate the culture of scandal that has dogged Johnson for months, including lockdown lawbreaking in Downing Street.

By Wednesday evening, 38 ministers had quit in total, mostly from more junior positions outside the cabinet.

But at the parliamentary committee, and an earlier question and answer session with lawmakers in parliament, Johnson defiantly vowed to get on with the job.

"I'm not going to give a running commentary on political events," he told the committee when asked about the cabinet delegation.

"We're going to get on with the government of the country."

He added: "What we need is stable government, loving each other as Conservatives, getting on with our priorities, that is what we need to do."

"The problem starts at the top, and I believe that is not going to change," he said.

"And that means that it is for those of us in that position -- who have responsibility -- to make that change."

Cries of "bye, Boris" echoed around the chamber at the end of his speech. Most Tories were conspicuously silent when Johnson attacked the Labour opposition at prime minister's questions. Some shook their heads.

Sunak and Javid quit just minutes after Johnson apologised for appointing a senior Conservative who quit his post last week after he was accused of drunkenly groping two men.

Former education secretary Zahawi was immediately handed the finance brief and acknowledged the uphill task ahead.

"You don't go into this job to have an easy life," Zahawi told Sky News.

Downing Street at first denied Johnson knew of prior allegations against Pincher when appointing him in February.

But by Tuesday, that defence had collapsed after a former top civil servant said Johnson, as foreign minister, was told in 2019 about another incident involving his ally.

Minister for children and families Will Quince quit early Wednesday, saying he was given inaccurate information before having to defend the government in a round of media interviews on Monday.

Tory critics said the Pincher affair had tipped many over the edge, accusing the prime minister of turning a blind eye to sexual assault.

Johnson only narrowly survived a no-confidence vote among Conservative MPs a month ago, which ordinarily would mean he could not be challenged again for another year.

But the influential "1922 Committee" of non-ministerial Tory MPs is reportedly seeking to change the rules, with its executive committee Wednesday announcing it will elect a fresh lineup of members next week.

A snap Savanta ComRes poll Wednesday indicated that three in five Conservative voters say Johnson cannot regain the public's trust, while 72 percent of all voters think he should resign.

But Sunak's departure in particular, in the middle of policy differences over a cost-of-living crisis sweeping Britain, was dismal news for Johnson.

The prime minister, who received a police fine for the so-called "Partygate" affair, faces a parliamentary probe into whether he lied to MPs about the revelations.

Two Conservative MPs were forced to resign in recent weeks, forcing by-elections that were won by opposition parties, concentrating the minds of party critics who fear a wider reckoning with the electorate if Johnson stays.