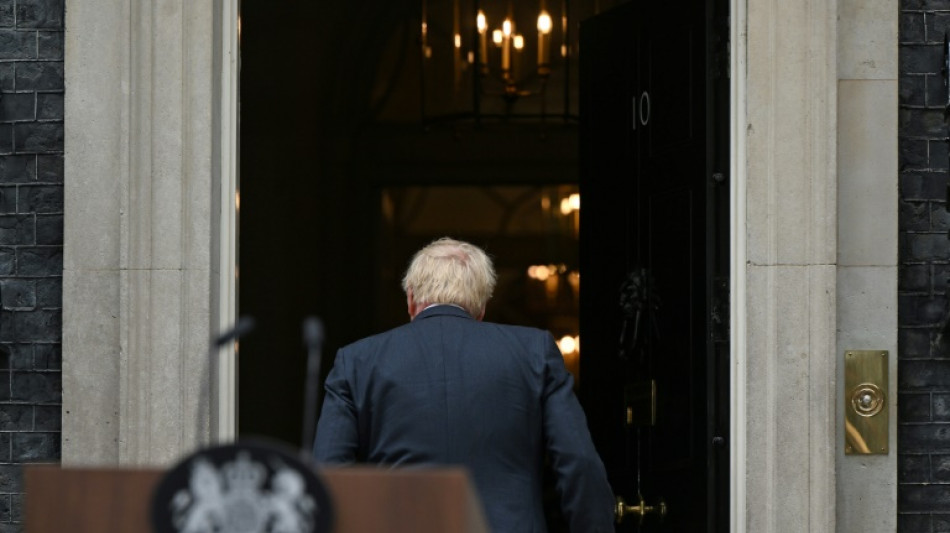 Britain's main opposition Labour party on Friday threatened to call a no-confidence vote in Prime Minister Boris Johnson to get him to quit immediately, after he was forced to resign by a cabinet revolt.

Johnson quit as leader of the ruling Conservative party on Thursday, after a frenzy of nearly 60 resignations in less than 48 hours in opposition to his scandal-hit leadership.

But the 58-year-old premier, whose three-year premiership has been defined by Britain's departure from the European Union and Covid, said he would stay on until his successor is found.

As candidates readied for a battle to replace Johnson, he faced calls to leave straight away and for an acting leader to be appointed to head the world's fifth-largest economy in the interim.

Labour's deputy leader Angela Rayner on Friday said they aimed to trigger a vote of no-confidence in parliament if the Tories do not get rid of him immediately.

"He's a proven liar who's engulfed in sleaze and we can't have another couple of months of this," she told BBC radio.

"If they don't, we will call a no-confidence vote because it's pretty clear he hasn't got the confidence of the House (of Commons) or the British public."

To do so, they would need the support of dozens of Conservative MPs. But the strategy is fraught as it could trigger a general election, which could see Tories lose their seats if Johnson is defeated.

James Cleverly, newly installed as education minister, insisted that Johnson would stay in charge for the next few months.

"And we should do that I think pretty quickly."

A timetable for the Tory leadership contest is expected to be announced on Monday, with the winner installed in time for the party's annual conference in early October.

Defence minister Ben Wallace and Rishi Sunak -- whose resignation as finance minister on Tuesday set off the chain of exits -- were among the early frontrunners to take over, a YouGov survey of Tory members suggested.

Foreign Secretary Liz Truss, another potential contender, cut short a trip to Indonesia for a G20 meeting to fly back.

In a defiant resignation speech in Downing Street, Johnson said he was "sad... to be giving up the best job in the world".

But he said he initially refused to surrender to his "herd" of Tory critics by claiming a personal mandate he won by a landslide in December 2019.

Even while eyeing the exit, Johnson sought to steady the ship, making several appointments to replace departed cabinet members.

At a first meeting of his hastily convened new cabinet, Johnson confirmed his lame-duck status by saying "major fiscal decisions should be left for the next prime minister", Downing Street said.

Downing Street officials eventually conceded that Johnson had known about other allegations against Pincher back in 2019, and many ministers recoiled at having to defend the leader yet again.

As late as Wednesday night, Johnson had been defiantly clinging to power.

But he was forced to concede his time was up after another round of resignations on Thursday mornings and warnings of a second no-confidence vote next week by Tory MPs.

Johnson's popularity had slumped since revelations about lockdown-breaking parties in Downing Street that saw him become the first prime minister to be fined in office.

Johnson gambled successfully on a vaccine campaign but was criticised for his initial response to the pandemic, which saw more than 180,000 people in Britain die after contracting Covid.