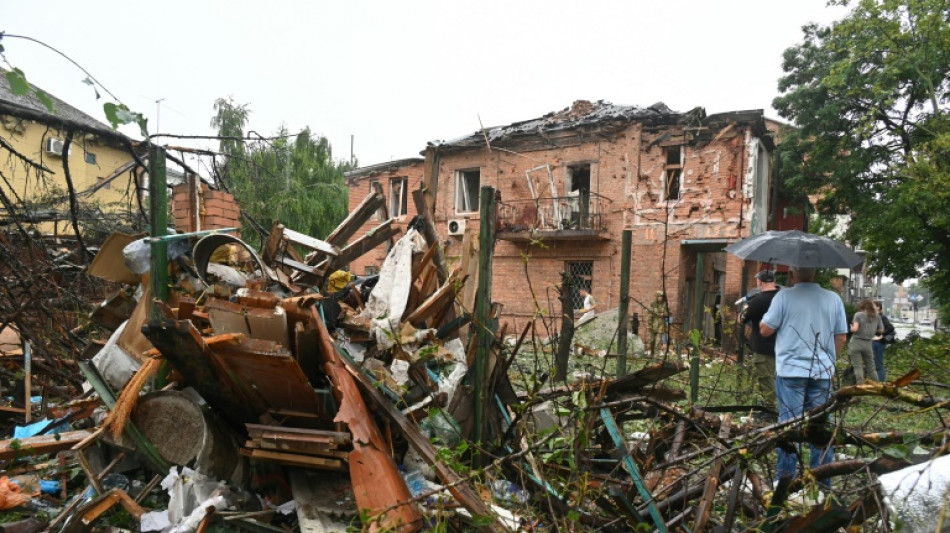 Ukraine warned Monday that Russian forces were preparing to intensify their fight for key cities in the Donbas, where the death toll from a weekend attack rose to 30 as rocket strikes killed six in the country's second city.

The attacks in Kharkiv in northeast Ukraine came as Europe braced for deeper cuts in gas supplies from Russia.

Prosecutors in his region said "six civilians were killed, including a 17-year-old and his father, who were driving past" at the time of the attack, according to the Interfax-Ukraine news agency.

Russian state-run news agency TASS reported meanwhile that the pro-Moscow head of the Russian-occupied village of Velikiy Burluk in Kharkiv had been killed after his car was blown up.

The Russian-run administration there blamed Yevgeny Yunakov's death on a "terror attack" organised by Ukrainian authorities, according to TASS.

In eastern Ukraine -- the focal point for a grinding Russian offensive -- 30 people were left dead by Russian strikes over the weekend on the town of Chasiv Yar in the Donetsk region, the emergency services said.

Russian defence ministry spokesman Igor Konashenkov claimed "more than 300" Ukrainian combatants had been killed in a Russian strike near Chasiv Yar, without giving a date.

Having fought long battles to capture areas of the eastern Lugansk region, Russian troops are now turning their focus to Donetsk as they look to take control of the whole Donbas.

The eastern region was under persistent shelling, but Russian ground attacks were all but paused, the Ukrainian army said Monday.

It warned, however, that Russian troops were likely planning to launch some of their heaviest attacks yet in the Donetsk region.

"There are signs of enemy units preparing to intensify combat operations in the direction of Kramatorsk and Bakhmut," it said, referring to two main cities still under Ukrainian control.

Moscow's slow advance into the east -- despite fierce Ukrainian resistance emboldened by recent deliveries of Western-supplied artillery -- contrasts with their failure to capture the capital Kyiv at the start of the invasion.

Dutch Prime Minister Mark Rutte during a visit to Kyiv said his country would supply Ukraine with more long-range artillery and an aid package worth 200 million euro ($201 million).

"This war may last longer than we all hoped or expected. But that does not mean we can sit back and passively watch how it unfolds. We have to stay focused and continue to support Ukraine in every way," Rutte told a press conference with Ukrainian President Volodymyr Zelensky.

In Bucha, a town outside Kyiv, 36-year-old web designer Maxim said just three months ago, Russian soldiers were rummaging through his home and sleeping in his children's bedroom.

"In this atmosphere, I feel like nothing can happen and that life is normal," he said, sitting with his family outside his home.

"But we know there's a war and there's no place safe in Ukraine right now."

The repercussions of the conflict were being felt in western Europe as Russian gas giant Gazprom on Monday began more than a week of routine maintenance on its Nord Stream 1 pipeline.

Germany and other European countries cast a worried eye on energy supplies after Italy's Eni and Austria's OMV said Gazprom was further reducing the supply of gas.

Eni said flows were dropping to 21 million cubic meters (741 million cubic feet) per day, down from a recent average of about 32 million, while OMV said it would see a 70-percent reduction.

After Russia's invasion of Ukraine in February, Germany suspended certification of a second pipeline, Nord Stream 2, as fears grew over Europe's massive dependence on Russian gas.

In a bureaucratic swipe at Kyiv, Russian President Vladimir Putin on Monday signed a decree to fast-track citizenship for all Ukrainians.

The foreign ministry in Kyiv hit back calling it "another encroachment on the sovereignty and territorial integrity of Ukraine, incompatible with the norms and principles of international law.

The decree builds on previous orders -- including one issued earlier in the invasion -- making it easier for Ukrainians living under Moscow-occupied territory to receive Russian passports.