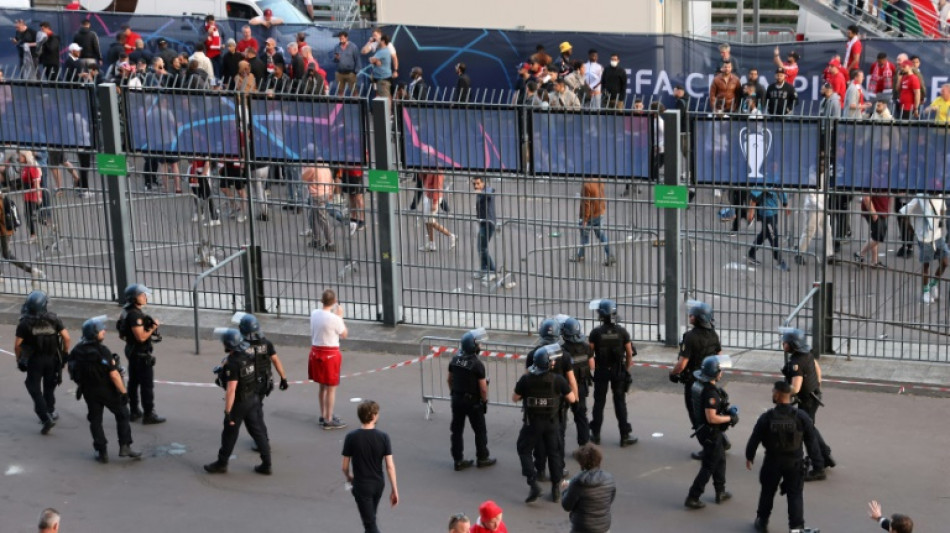 The findings of a French Senate enquiry into the crowd chaos at this year's Champions League final in Paris are set to be published on Wednesday, threatening further embarrassment for the police and under-fire Interior Minister Gerald Darmanin.

A fact-finding mission led by two senators has been hearing from witnesses since the Liverpool-Real Madrid game on May 28 which was marred by a delayed kick-off, crushes, teargas and street crime.

The investigation has already concluded the problems were mostly caused by a lack of preparation by French authorities, who offered to host the biggest game in the European football after it was stripped from Russia following Moscow's invasion of Ukraine.

The final report is almost certain to contradict repeated statements from Darmanin that Liverpool fans were mostly to blame, with the minister claiming that up to 40,000 of them travelled to the stadium either with fake tickets or without them.

"Our work has already made clear a number of dysfunctions," senator Francois-Noel Buffet, a co-chair of the investigation, said on June 21 during one of the final hearings.

"Contrary to what has been said, including here by the interior minister, English supporters were not the cause of the incidents. Let's say things clearly and bluntly: everyone recognises that they demonstrated great self-control in the face of what you could call chaos," he added.

Many Liverpool supporters struggled to travel to the stadium because of a transport strike, then found themselves in bottlenecks and crushes at the stadium entry gates, where police fired tear gas to move them back.

Disabled Liverpool fans testified to the Senate commission that officers had even sprayed people in wheelchairs.

After the game, fans from both sides were preyed on by local gangs as they made their way to local transport connections, with many reporting pickpocketing, muggings and threats as the police looked on.

The televised events were a national embarrassment and are thought to have influenced parliamentary elections in June when President Emmanuel Macron lost his majority and the anti-immigration National Rally party made unprecedented gains.

Darmanin survived a government reshuffle in May and has since been given extra responsiblity as interior minister despite his widely disputed claims, which caused fury in Liverpool and tensions with the British government.

Authorities have also been under pressure to explain why security camera footage from the stadium was not saved, removing a potentially vital source of information for investigators as they try to piece together events.

The head of the Paris police, Didier Lallement is also set to face stinging criticism after he admitted in a hearing on June 9 that security operations had been a "failure".

But the renowned hardliner defended the use of teargas to move fans back from the stadium, saying there was "no other way."

France is to host the Rugby World Cup next year and the Olympics in 2024, with the Senate report also set to make a series of recommendations to improve coordination for major sporting events between organisers, local authorities and police.