Verdict due for Iranian ex-official in Sweden war crimes trial 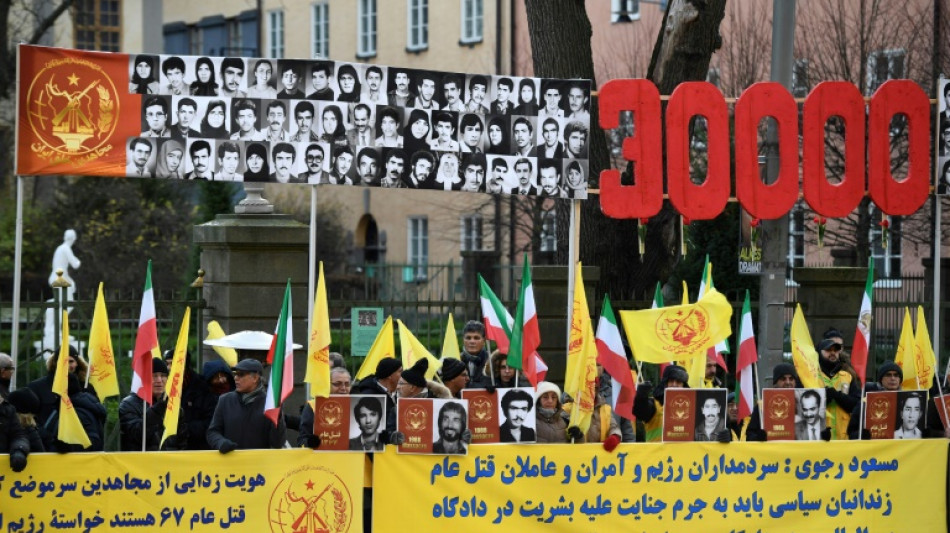 A Swedish court will on Thursday render its verdict in the trial of Hamid Noury, a former Iranian prison official accused of war crimes during a 1988 purge of dissidents.

The proceedings marked the first time an Iranian official has gone on trial for the mass executions.

The proceedings, which have been running since August 2021, have strained relations between Sweden and Iran, raising concerns about reprisals against Western prisoners held by the Islamic regime. Two Swedish-Iranian citizens are on death row.

Noury, 61, faced charges including crimes against humanity and war crimes for his role in the killing of at least 5,000 prisoners across Iran, allegedly ordered by supreme leader Ayatollah Khomeini.

The killings were revenge for attacks carried out by exiled opposition group the People's Mujahedin of Iran (MEK) at the end of the Iran-Iraq war of 1980-88.

The prosecution has called for a life sentence for the accused, claiming he was assistant to the deputy prosecutor of Gohardasht prison near Tehran at the time.

They say he handed down death sentences, brought prisoners to the execution chamber and helped prosecutors gather prisoners' names.

Throughout the nine months of hearings, Noury, often theatrical and smiling, rejected the testimony of former detainees.

He has argued that he was on leave during the period in question, and said he worked in another prison. Noury denounced the accusations as a plot by the MEK to discredit the regime in Tehran.

"I hope these hands will be cleared... with the help of God," Noury told the court on the last day of hearings on May 4, his palms raised to the sky and holding a Koran.

Among the dozens called to the stand, several witnesses said they had recognised him instantly.

"When I was in the death corridor... I had the chance to see him and I witnessed that whenever they read some people's names he followed them towards the death chamber," one of the plaintiffs, Reza Falahi, told AFP.

"He would come back 45 minutes later, and the scene would repeat itself several times a day," he added.

Noury was arrested at a Stockholm airport in November 2019 after Iranian dissidents in Sweden filed police complaints against him.

Former Gohardasht prisoner Iraj Mesdaghi has said Noury had been lured to Sweden -- where he has family members -- with the promise of a luxury cruise, although Noury himself denied this account.

During the trial, which briefly relocated to Albania to hear some testimony at the end of 2021, MEK supporters protested loudly outside the Stockholm courthouse. Another gathering is planned for Thursday.

Given the sensitive nature of the case, the trial has rendered Stockholm's already chilly relations with Tehran even frostier.

This is partly because rights activists accuse senior Iranian officials now in power -- including current President Ebrahim Raisi -- of having been members of the committees that handed down the death sentences.

The so-called "death committees" are thought to have sent at least 5,000 to be executed. The MEK puts the figure as high as 30,000 victims.

Raisi himself has denied ever having been part of these committees.

Tehran has repeatedly called on the Swedish government for Hamid Noury's release.

Swedish Foreign Minister Ann Linde reaffirmed to her Iranian counterpart in early July that the government was unable to do anything as Nordic country's courts were "completely independent".

Concerned about a recent spate of arrests of Europeans in the country "for no apparent reason", Sweden has been advising its citizens against travel to Iran since late June.

The main concern is the Iranian-Swedish academic Ahmadreza Djalali. Sentenced to death in Iran in 2017 on espionage charges, and currently awaiting the sentence to be carried out.

Amnesty International has accused the Iranian authorities of holding him "hostage" in an attempt to force an exchange with Hamid Noury and a former Iranian diplomat sentenced to 20 years in prison in Belgium, Assadollah Assadi.

A controversial treaty is being considered by the Belgian parliament that would allow the exchange of prisoners with Iran.

Asked about the possibility of such an exchange for the Swedish side, the foreign ministry did not want to comment.