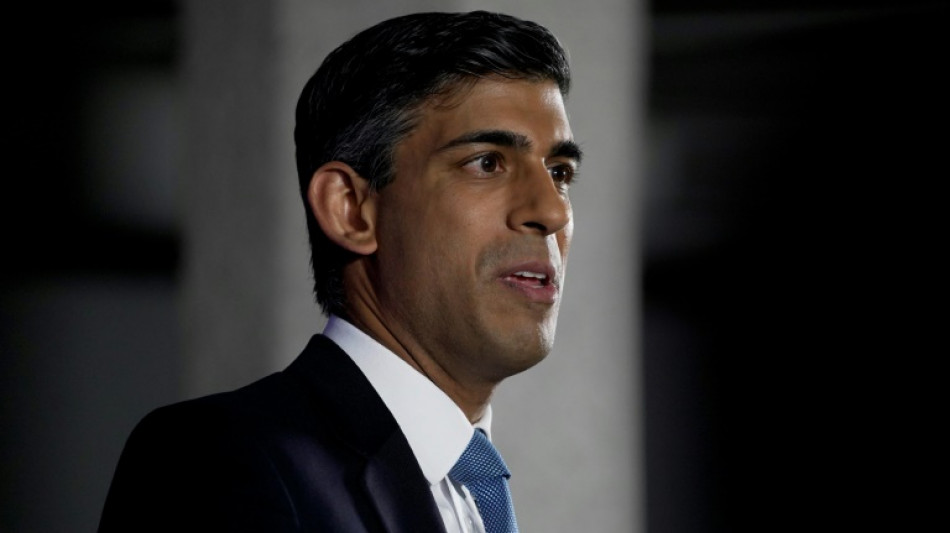 Former finance minister Rishi Sunak came out on top in the latest round of voting Thursday by Conservative MPs to decide Britain's next prime minister, followed by bookmaker favourite Penny Mordaunt.

Mordaunt earlier came under blistering attack after she surged in the race to succeed Boris Johnson, as another long-shot candidate for leader was eliminated.

The little-known Mordaunt, a committed Brexiteer who was briefly Britain's first woman defence secretary before she was demoted to less senior roles, has emerged as the darling of Tory grassroots members.

In the second round of voting by Conservative MPs, the Royal Navy reservist again came a strong second with 83 votes, behind former finance minister Sunak with 101.

Foreign Secretary Liz Truss -- the favoured candidate of Johnson loyalists -- was third with 64, after formally launching her campaign with vows of tax cuts and a smaller state.

Promising "an aspiration nation", Truss said she would be ready "from day one" to fix the enfeebled UK economy and take on Russian President Vladimir Putin over the war in Ukraine.

Attorney General Suella Braverman was eliminated from the race after coming last, with the five remaining candidates proceeding to the next round of voting by Tory MPs on Monday.

Polls point to Mordaunt beating Sunak, Truss and the others comfortably, once the party members decide between the final two candidates in the coming weeks.

But Mordaunt was savaged by her former boss in the Brexit ministry, David Frost, who called her unfit for office. And she is barely known nationally.

A poll of more than 2,200 adults by Savanta ComRes said only 11 percent could identify Mordaunt from her photograph, and only 16 percent of Conservative voters. Two respondents thought she was the singer Adele.

Former foreign secretary Jeremy Hunt, after his elimination on Wednesday, threw his support behind Sunak, whose resignation from the cabinet last week helped spark a ministerial revolt against Johnson after months of scandal.

Drawing a pointed contrast to Johnson, Hunt said the former chancellor of the exchequer was "one of the most decent, straight people with the highest standards of integrity" in politics.

But the wealthy Sunak faces questions about his family's tax affairs and his prior decision to retain US residency.

And he is opposed to immediate tax cuts to confront a post-pandemic cost-of-living crisis, stressing the need instead for fiscal responsibility.

"I don't judge people by their bank accounts, I judge them by their character," Sunak told BBC radio.

"And I think people can judge me by my actions over the past couple of years," he said, pointing to the economic support he designed as chancellor during the pandemic.

Mordaunt, a junior trade minister who is relatively untainted by the scandals of Johnson's premiership, has come up the middle between Truss and Sunak with a campaign strong on patriotic themes.

But the Daily Mail took aim at her stance on transgender people, one of Britain's "culture war" debates that has energised the party's right-wing.

Mordaunt was "telling lies" after previously supporting transgender women in the role of equalities minister, only to take a harder line at her campaign launch this week, the newspaper quoted a Truss ally as saying.

Mordaunt's political enemies have also jibed at "Part-time Penny", alleging she has not taken her government roles seriously.

That line of attack was given new impetus from a dramatic intervention by Frost, who resigned as Brexit minister last year.

Based on their time working together, "I'm afraid I would have grave reservations" about her entering 10 Downing Street, Frost told TalkTV, revealing that at his request, Johnson had removed her from their department.

"I'm sorry to say this that I felt she did not master the detail that was necessary in the negotiations (with Brussels, over Northern Ireland) last year," he said.

"She wouldn't always deliver tough messages to the European Union when that was necessary, and I'm afraid she wasn't sort of fully accountable, she wasn't always visible. Sometimes I didn't even know where she was."

Several television debates between the remaining candidates loom, with the first Friday night, ahead of weeks of nationwide hustings in front of Tory members. The eventual winner is set to be announced on September 5.