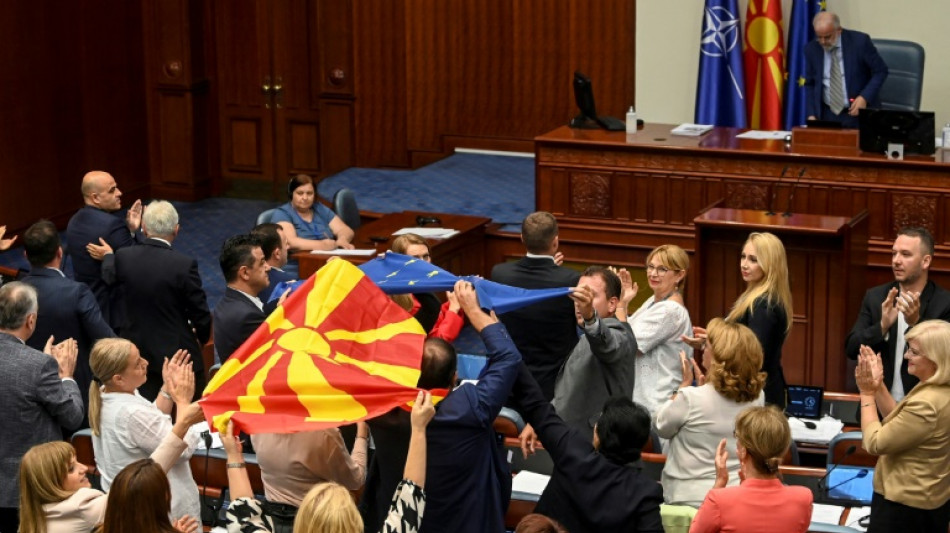 EU member Bulgaria had until recently blocked any progress for such talks because of a dispute between the countries over linguistic and historical issues.

But last month, Bulgarian deputies approved lifting that veto in exchange for EU guarantees that North Macedonia meets certain demands on the issues in question.

"Finally, after 17 years, we are starting the process of accession negotiations with the European Union," Kovacevski told reporters after a parliamentary vote.

He described the agreement as "a historic step".

"We are one step away from the first intergovernmental meeting (with the EU)," he said.

"From today onwards, we are going to move towards the EU at an accelerated pace."

Earlier, the parliament in Skopje had adopted a framework for negotiations aimed at protecting North Macedonia's language and identity, a decision welcomed in Brussels.

"It was a historic opportunity. And you seized it," she added.

"We recognise the difficult tradeoffs considered in this compromise, which acknowledges and respects North Macedonia's cultural identity and the Macedonian language," he said in a statement.

"A European Union that includes all of the Western Balkans, including Albania and North Macedonia, will be stronger and more prosperous."

"We welcome you with open arms," Michel tweeted.

Following the vote in North Macedonia's parliament, deputies held up both the national flag and that of the EU in the chamber.

But opposition deputies had already walked out of the chamber.

"What the (government) has accepted is a betrayal of Macedonia and the Macedonian people," said a statement from the main opposition nationalist rightwing VMRO-DPMNE party.

"This is a complete Bulgarisation and assimilation of Macedonia," it added, denouncing Kovacevski as a traitor. Kovacevski leads a leftwing government dominated by the SDSM party.

Opposition protesters demonstrated outside parliament against the deal, as they have done daily for more than a week.

Bulgaria had been holding up progress on EU membership talks for both North Macedonia and Albania since 2020.

The decision says Skopje must include Bulgarians in its constitution "on an equal footing with other peoples"; and implement a treaty of friendship, good neighbourliness and cooperation signed with Bulgaria in 2017.

That treaty was designed to end discrimination and hate speech.

Both these points are covered in the agreement drawn up during France's EU presidency in the first half of the year.