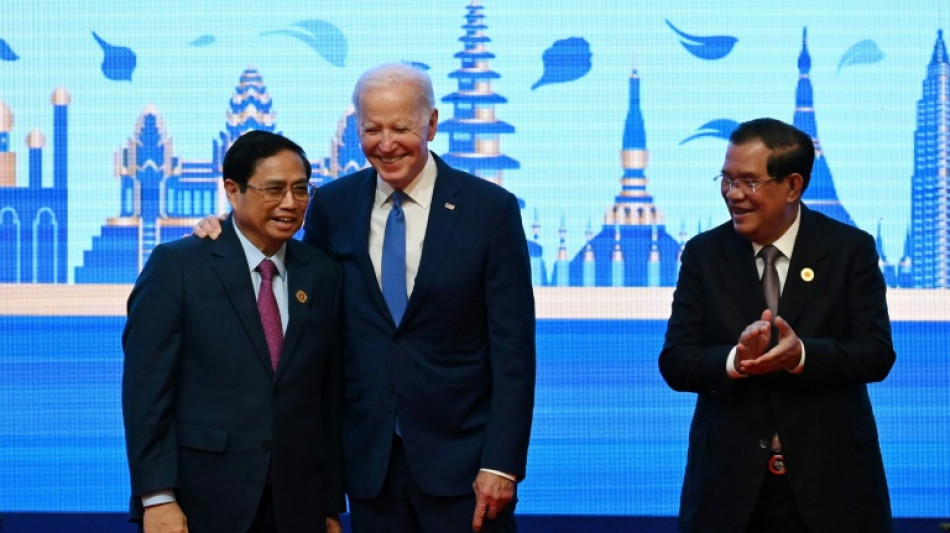 US President Joe Biden will seek ways to rein in Pyongyang after its barrage of missile tests in talks with South Korean and Japanese leaders Sunday, a day before a high-stakes encounter with China's Xi Jinping.

A record-breaking spate of launches by the North in recent weeks has sent fears soaring that the reclusive regime will soon carry out its seventh nuclear test.

The White House says Biden will press China to curb Pyongyang's activities when he holds his first face-to-face meeting with Xi on Monday on the sidelines of a G20 summit in Indonesia.

The three-way meeting on the sidelines of an East Asia Summit in Phnom Penh comes after flurry of tests by the North earlier this month, including an intercontinental ballistic missile.

Pyongyang ramped up its launches in response to large-scale US-South Korean air exercises, which the North described as "aggressive and provocative".

Biden will use his closely watched talks with Xi on Monday to urge China to use its influence as North Korea's main ally to press Kim Jong Un's regime to cool down.

US National Security Advisor Jake Sullivan said the president would not make demands but would warn Xi that further missile and nuclear build-up would mean the United States boosting its military presence in the region -- something Beijing bitterly opposes.

"North Korea represents a threat not just to the United States, not just to (South Korea) and Japan but to peace and stability across the entire region," Sullivan told reporters.

Biden flew to Phnom Penh from the COP27 climate conference as part of US efforts to boost its influence in Southeast Asia as a counter to China.

China has been flexing its muscles -- through trade, diplomacy and military clout -- in recent years in a region it sees as its strategic backyard.

Biden took a veiled swipe at Beijing in talks with leaders from the Association of Southeast Asian Nations (ASEAN) regional bloc.

He said the United States would work with ASEAN to "defend against the significant threats to rules-based order and threats to the rule of law".

While the president did not refer to China by name, Washington has long criticised what it says are Beijing's efforts to undermine international norms on everything from intellectual property to human rights.

Biden and Chinese Premier Li Keqiang were seated on either side of host, Cambodian leader Hun Sen, at a gala dinner to mark the ASEAN summit on Saturday night.

Biden goes into the meeting with Xi buoyed by unexpectedly successful midterm elections at home, where his Democratic Party retained control of the US Senate and saw off predictions of a Republican "red wave".

For his part, Xi was anointed last month for a historic third term as paramount leader by the Chinese Communist Party congress.

Sunday's East Asia Summit rounds off the first leg of a trilogy of summits, with the G20 on the holiday island of Bali and an APEC gathering in Bangkok to follow.

The consequences of the war in Ukraine are set to dominate the upcoming talks, although Russian President Vladimir Putin will be notably absent.

Shunned by the West over his invasion of Ukraine, Putin has despatched his veteran Foreign Minister Sergey Lavrov in his stead.

Observers will be watching for any repeat of the tit-for-tat walkouts staged by Lavrov and Western officials at meetings earlier this year.

Ukrainian President Volodymyr Zelensky is expected to attend the G20 virtually, after his request to address the ASEAN gathering was turned down.