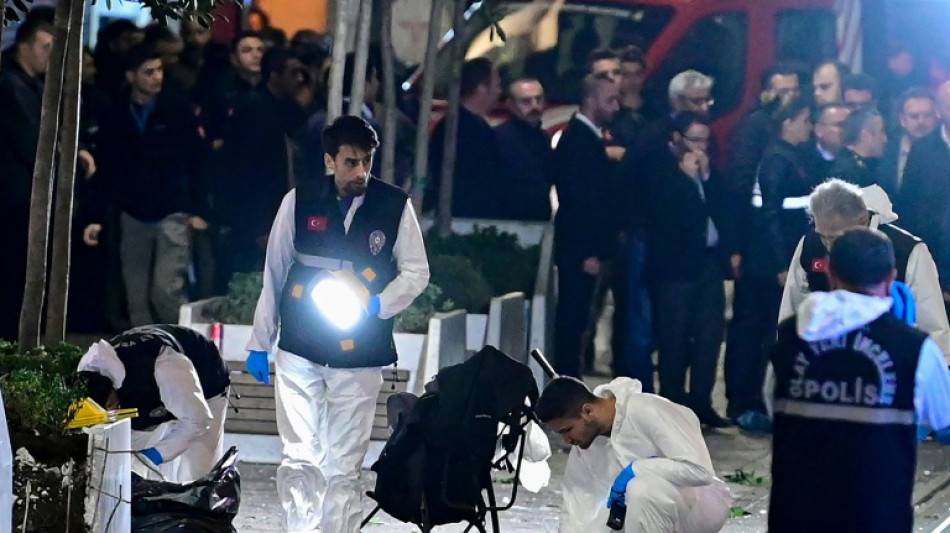 One couple ran down the street, tears in their eyes.

The lower part of the avenue remained accessible after the explosion, but a police cordon blocked off the rest of the popular thoroughfare just ahead of the imposing gates of Galatasaray high school.

Most shops, usually open until late, pulled down their shutters after the blast, but some stayed open in a show of defiance.

"We are not afraid, we heard the explosion but we are open as long as the police don't come and ask us to close," said Mustafa Guler, manager of the Keyif Nevizade restaurant in the neighbourhood.

Nevizade Street, a string of fish restaurants 300 metres from the blast site, is usually packed around the clock.

But the terraces were more muted than usual by late afternoon.

Most televisions were tuned to an afternoon football match.

One couple ate fish on a terrace, a bottle of raki to hand, while those trying to lure passers-by into other restaurants raised their heads as a helicopter flew overhead.

A single bar on the corner eschewed the football, a top-tier clash between Kayserispor and Konyaspor, and was showing a live statement in which President Recep Tayyip Erdogan denounced the "vile attack".

"We don't know what to do. Erdogan says it is a terrorist attack. I hope this is not the return of the attacks," said Elif, a 22-year-old student.

Behind him, access to Istiklal Avenue was blocked off.

Journalists milled around as cameras panned in front of the police cordon. Turkish television stations were ordered not to broadcast footage of the aftermath to "prevent spreading fear".

Members of the Turkish police special forces suddenly appeared, in fatigues, rifles, helmets and balaclavas, and headed up the avenue.

Meanwhile tourists continued to stroll nearby, shopping bags in hand.

"We are not afraid. We know that attacks happen very often in this kind of country," said Sylvana Sassa, a 27-year-old from Gabon who arrived in Istanbul 10 days ago.

"Since we're not staying very long, we've continued shopping (after the explosion), and we'll go back tomorrow morning," she said, clutching her pink suitcase in hand.

"I'm not afraid," he said. "But I'm angry," added the self-described "opposition supporter".

"Angry that my country finds itself in such a situation again."

Istiklal Avenue had already been hit in the past during a campaign of attacks in 2015-2016 that targeted Istanbul and other cities including the capital Ankara.

Those bombings were mostly blamed on the Islamic State group and outlawed Kurdish militants, and killed nearly 500 people and injured more than 2,000.