Russian atrocities in Kherson region same as other regions: Zelensky 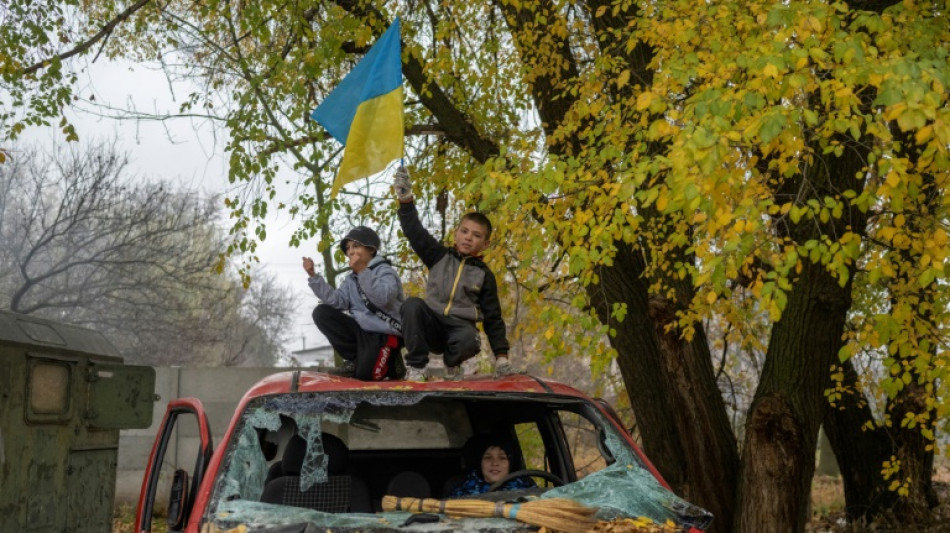 "The Russian army left behind the same atrocities as in other regions of our country," he said in a nightly address.

"Investigators have already documented more than 400 war crimes," the Ukrainian leader said, without clearly specifying the area in which they were found.

"The bodies of the killed are being found, both civilians and military," he said. "We will find and bring to justice every murderer."

Ukrainians in the liberated city have expressed a deep sense of relief over the end of months of occupation as Russian forces pulled out on Friday.

But, like Zelensky, they said the Russians had left a trail of destruction, laying mines and going on a looting spree -- even stealing animals from a zoo -- before their humiliating withdrawal.

"God will punish them. All of them. For everything they did," said Svitlana Vilna, 47.

Ruined buildings and destroyed military vehicles could be seen at the entrance to the strategic Black Sea port city, where battles raged just days ago.

A smell of burning wood wafted through the air.

"I ask you not to forget that the situation in the Kherson region is still very dangerous," Zelensky said.

He said a Ukrainian sapper had been killed while removing a mine, while four others were injured.

Zelensky said workers were moving to quickly restore critical infrastructure destroyed by the Russians, including water, electricity, internet and television links, as well as transport and postal services.

Kherson was one of four regions in Ukraine that Russian President Vladimir Putin claimed to have annexed in September.

An AFP correspondent saw no scenes of jubilation in Kherson on Sunday, but many locals said they felt an overwhelming sense of relief after Kyiv had wrested back control of the city.

Residents queued to get food, and many adults and children walked around wrapped in Ukrainian flags.

Some gathered on the city's main square, mostly to use Starlink satellite internet and connect with relatives.

"I need to get in touch with my family," said Klavdia Mych, a retired teacher.

"We have been without water for a week," the 69-year-old added. "And they say everything is mined. It is very scary."

Viktoria Dybovska, a 30-year-old sales clerk, said the Russians "took everything with them".

"They cleared out the stores," she added.

"They switched off the lights three or four days ago just as they were leaving. They simply vanished overnight," said Antonina Vysochenko, 29.

Oleksandr Todorchuk, founder of the organisation UAnimals, said Russian troops had taken most of the local zoo's animals to Crimea: "from llamas and wolves to donkeys and squirrels," he said on Facebook.

The city of Kherson was the first major urban hub to fall after Russia invaded in February.

Sergii Zatirko, 65, called the Russian troops "pigs," saying they had left a lot of rubbish behind.

"We want to clean up everything as soon as possible so that nothing will remind us of these beasts," he said.

On Saturday, in the village of Pravdyne, outside Kherson, returning locals embraced their neighbours, with some unable to hold back tears.

"Victory, finally!" said Svitlana Galak, who had lost her eldest daughter in the war.

"Thank god we've been liberated and everything will now fall into place," the 43-year-old told AFP.

Several disabled anti-tank mines and grenades could be seen in the settlement, where a number of damaged buildings were visible.

While de-mining continues, a curfew has been put in place and movement in and out of the city has been limited, local authorities said.

Zelensky said Sunday that Kyiv was establishing control over more than 200 settlements in the region.

Ukraine's police chief Igor Klymenko said on Saturday that around 200 officers were erecting roadblocks and recording "crimes of the Russian occupiers".

On Sunday, the Ukrainian army said that Russia's troops had continued building fortifications on the left bank of the Dnipro River where they had withdrawn.

Overnight, Russian forces fired S-300 missiles at the right bank of the Dnipro but there were no casualties, the army said.

Kherson's full recapture opens a gateway for Ukraine to the entire Kherson region, with access to both the Black Sea in the west and the Sea of Azov in the east.

Shunned by the West over his offensive in Ukraine, Putin, 70, will not travel to Indonesia for the G20 leaders' summit next week.

US Secretary of State Antony Blinken hailed the "remarkable courage" of Ukraine's military and people, and vowed US support "will continue for as long as it takes" to defeat Russia.

"Ordinary people of Russia must surely ask themselves: 'What was it all for?'"