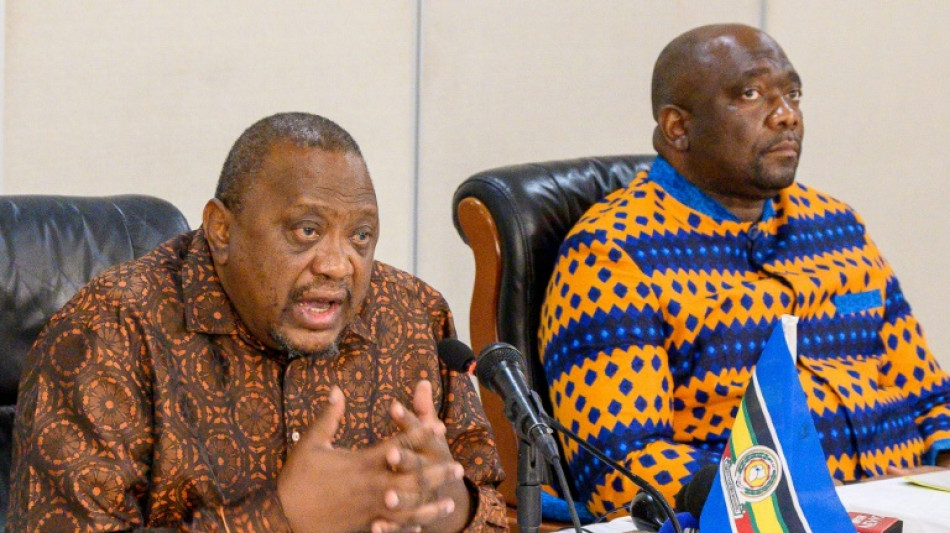 Troops and rebels traded heavy fire in the Democratic Republic of Congo on Monday, a military source and local inhabitants said, as an envoy from the East African bloc called for all armed groups to "silence the guns".

Government forces and the M23 militia were fighting in Kibumba, about 20 kilometres (12 miles) north of the strategic city Goma, the sources said, speaking by phone.

M23 fighters were also seen about 40 kilometres northwest of the city in the Virunga National Park, a wildlife haven famed for its mountain gorillas but which is also a hideout for armed groups, the sources said.

A mostly Congolese Tutsi group, the M23 -- the March 23 Movement -- leapt to prominence in 2012 when it briefly captured Goma before being driven out.

After lying dormant for years, the rebels took up arms again in late 2021, claiming the DRC had failed to honour a pledge to integrate them into the army, among other grievances.

They have since won a string of victories against the military and captured swathes of territory, prompting thousands of people to flee their homes.

The resurgence has ratcheted up diplomatic tensions, with the DRC accusing its smaller neighbour Rwanda of backing the group.

Kinshasa expelled Rwanda's ambassador at the end of last month as the M23 advanced, and recalled its own envoy from Kigali.

Rwanda denies providing any support for the M23 and accuses the Congolese army of colluding with the Forces for the Liberation of Rwanda (FDLR) -- a notorious Hutu rebel movement involved in the 1994 genocide of Tutsis in Rwanda.

"The Rwandan army and its allies from the M23 don't stop, every passing day, launching assaults on our different positions in Kibumba," lieutenant colonel Guillaume Ndjike, army spokesman for the eastern North Kivu province, told reporters.

Witnesses in the rebel-held town of Kiwanja also spoke last week of school canteens backed by World Food Programme being pillaged on Sunday and Monday.

"There was corn flour and oil. They took these provisions as food rations," a resident said.

Another said oil cans, flour sacks and beans had been taken away by truck the previous day.

That conflict, along with the Rwandan genocide, bequeathed a legacy of scores of armed groups which remain active across the region but especially in North Kivu.

The heads of the seven-nation East African Community (EAC) on Sunday announced they would hold a "peace dialogue" on the region's conflicts.

"All groups that currently bear arms should lay those arms down and choose the path of peace through dialogue," said EAC's mediator, former Kenyan president Uhuru Kenyatta, on Monday.

He arrived in Kinshasa the day before to hold consultations ahead of November 21 peace talks in Nairobi.

"Silence the guns and join in a political process," he urged local armed groups.

To foreign groups, "the DRC is no longer the battleground for problems that are not from this country," Kenyatta added.

"There is nothing that can be gained through the barrel of a gun."

Another diplomatic path is being explored by Angolan President Joao Lourenco.

He met on Friday with Rwandan President Paul Kagame and on Saturday with Congolese President Felix Tshisekedi.