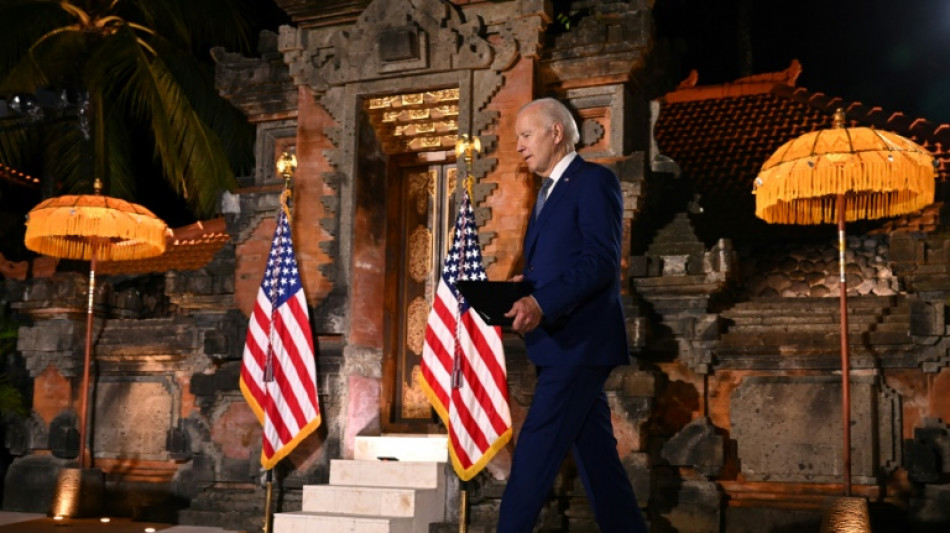 It could be the beaches and palatial hotels. It might be Chinese President Xi Jinping's warm smile. But there is no doubt: Joe Biden is enjoying his Bali G20.

"I don't think I'm going home," Biden joked to his host, Indonesian President Joko Widodo, enthusing about the beach stretching outside his hotel.

Later Monday, at an evening press conference in a tropical garden, Biden's first words to journalists were: "Welcome to Bali."

Said with a chuckle, he seemed to refer to what everyone was experiencing: the cocktail of humid heat, stunning decor and abundant nature that felt a million miles from the stiff formality of the White House.

TV journalists were using towels to mop sweat from their faces. A chorus of crickets was so loud that even the garden waterfalls became inaudible. And the fatigue of flying to the other side of the world for back-to-back summits in Egypt, Cambodia and Bali had set in for many.

Biden himself croakily admitted to having caught "a little cold."

The overwhelming vibe for the veteran Democrat, however, was pure Bali -- a sense of relief.

Just over a week ago, Biden faced the prospect of having to travel in the wake of what were forecast to be humiliating midterms election losses.

Those predictions, however, proved wrong and instead he is spending the trip celebrating his party retaining the Senate and, more surprisingly, limiting Republican opponents to slim victories in the House.

Even better for Biden, the election marked a repudiation of Donald Trump-backing Republicans and their campaign to cast doubt on US democracy. This reinforces Biden's overarching message that his 2020 defeat of Trump was no ordinary contest but the start of an existential battle for the country's future.

Last week's election "sent a very strong message around the world that the United States is ready to play," Biden said.

The results signalled that "we're going to stay fully engaged in the world and that we, in fact, know what we're about."

Biden carried that self-confidence -- and sunny outlook -- into his meeting with Xi on the sidelines of the G20 conference.

The men know each other from their long political careers, but this was the first in-person talk since Biden became president. That, according to US officials, was really the main achievement on a day where expectations were kept deliberately low.

Flashing a smile, Biden strode up to the Chinese leader and clasped his hand. They looked more like old friends meeting in a beautiful tropical resort than adversaries.

"I'm really glad to be able to see you again in person. We spent a lot of time together and -- back in the days when we were both vice presidents, and it’s just great to see you," Biden said.

Xi is not known for his personal warmth in public. And after recently securing a third term as the president of China, he speaks from a position of increasing strength.

But he too seemed to catch the island vibe.

Noting that he and Biden had placed many phone calls and exchanged letters, he added that nothing can "substitute for face-to-face exchanges".

"We finally have this face-to-face meeting," he said.

That both men were "shaking hands and smiling" caught the attention of English-language Chinese state media outlet the Global Times.

"This long-awaited scene between China and the US has timely relaxed and comforted the world's tense emotions," read its enthusiastic account.

Even Biden was quick to caution that from now on Washington and Beijing will not be all "kumbaya".

There was no sign of movement on the dangerous standoff over Taiwan. No one is expecting thaws in the tense and increasingly competitive trade relationship.

At the G20 summit, he has his work cut out in getting countries that aren't part of the West to up the pressure on Russia over Ukraine.

Back home, Biden's midterm victory lap will likely soon run into the rough reality of life with a Republican House.

Even with a fragile majority, the far-right wing of the party is itching to turn the last two years of Biden's first term into a political war zone.

Perhaps not by coincidence, Trump has set Tuesday evening in Florida for his expected announcement that he will seek the presidency again in 2024 -- just before the same time on Wednesday in Bali that Biden boards Air Force One to return to Washington.

For a few days though, Biden can enjoy his wins -- and the beach.

"I guess all of you are going swimming from here," he teased travelling journalists. "It's not far."