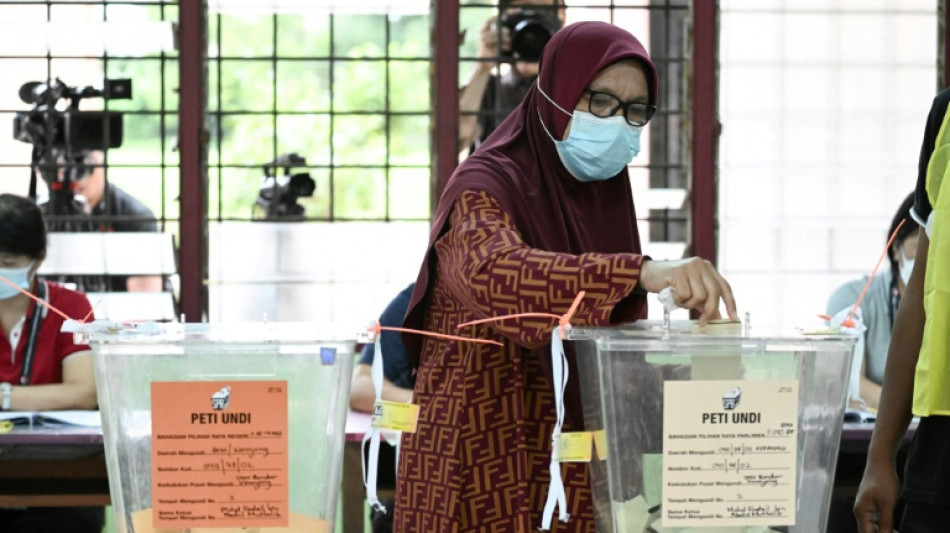 Malaysians headed to the polls on Saturday with jailed ex-leader Najib Razak's scandal-hit party seeking to cement its grip on power in a race analysts say is too close to call.

About 21 million registered voters are expected to troop to polling centres throughout the day amid fears heavy monsoon rains could disrupt the polls in certain areas.

In the rural town of Bera in Pahang state, women in traditional Malay headscarves arrived in cars and on motorcycles, while some of the elderly came in wheelchairs.

Nurul Hazwani Firdon, a 20-year-old tutor, said the economy was her top priority as she went to cast her ballot.

“I want a strong government and a stable economy so that there will be more job opportunities for the youth," she said.

"We just want someone who is trustworthy and able to do the job properly,” he said.

The two governments that succeeded UMNO, however, were plagued by infighting, allowing the party to creep back into power last year. Now, UMNO will be seeking a stronger mandate in an election called ten months ahead of schedule.

Among the challengers is perennial opposition leader Anwar Ibrahim, 75, who leads the ethnically-diverse Pakatan Harapan (Alliance of Hope) coalition. He is campaigning on an anti-corruption platform.

With age catching up, this election could be Anwar's last chance to fulfil his 20-year dream of leading Southeast Asia's third-largest economy.

He is up against the ruling Barisan National coalition, which is dominated by UMNO and led by Najib loyalist and ex-interior minister Ahmad Zahid Hamidi. It also includes caretaker prime minister Ismail Sabri Yaakob.

UMNO remains hobbled by corruption allegations. Najib, who was at the centre of the 1MDB scandal, is currently serving a 12-year jail term.

Corruption was a key issue at campaign rallies, where opposition parties repeatedly warned that Najib could walk free and corruption charges against Zahid and other party leaders could be dropped if UMNO wins.

The scandal, where billions in state funds were diverted to Beverly Hills properties, a superyacht, a Hollywood film and Najib's own bank account, sparked investigations from Singapore, Switzerland and the United States.

Analysts said there was no clear frontrunner among the four coalitions seeking the 222 parliamentary seats at stake.

Malaysians will choose from a record 945 candidates across the largely Muslim nation, which also includes the states of Sabah and Sarawak on Borneo island.

"Voters can expect a plethora of candidates on their ballot papers such that they will have a hard time deciding between candidates with similar positions," said Oh Ei Sun of the Pacific Research Center of Malaysia.

The number of eligible voters has risen from 18 million four years ago to more than 21 million after the voting age was lowered in 2021.

About 1.4 million of the new additions are first-time voters aged between 18 and 20.

The majority of voters live in rural areas, where patronage politics continues to hold sway.

Analysts said the multi-racial country would be in for further political instability if no coalition wins a clear majority.

"Unless Pakatan Harapan can clinch an outright parliamentary majority... the dominant UMNO party or one of the Malay Muslim parties would get to form a coalition government," Oh told AFP.

"Voters are likely to look forward to a similarly fragmented political landscape after the election, with a lot of horse-trading to form the next ruling coalition."

The election comes as Malaysians face soaring food prices, and parts of the country continue to be battered by flash floods due to monsoon rains.

Skies were overcast and drizzly in the capital Kuala Lumpur, and the meteorological department forecasted rain and thunderstorms around the country.