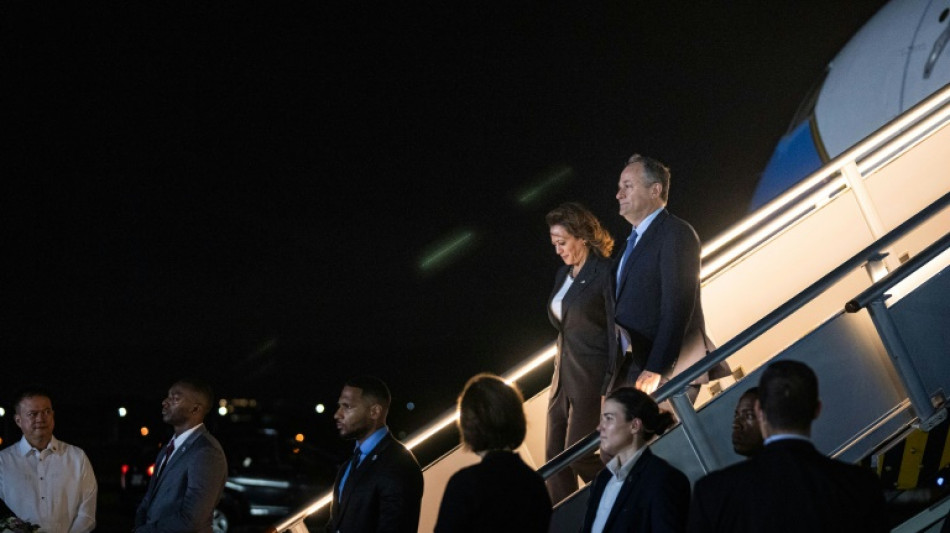 Harris is the highest-ranking US official to visit Manila since Marcos took power in June, signalling a growing rapport between the longtime allies after years of frosty relations under his Beijing-friendly predecessor Rodrigo Duterte.

She will also meet with her Philippine counterpart Sara Duterte, the daughter of the former leader whose deadly drug war sparked an international investigation into alleged human rights abuses.

The United States has a long and complex relationship with the Philippines -- and the Marcos family. Marcos's dictator father ruled the former US colony for two decades with the support of Washington, which saw him as a Cold War ally.

Washington is now seeking to bolster its security alliance with Manila under another Marcos presidency.

That includes a mutual defence treaty and a 2014 pact, known by the acronym EDCA, which allows for the US military to store defence equipment and supplies on five Philippine bases.

It also allows US troops to rotate through those military bases.

EDCA stalled under Duterte but the United States and the Philippines have expressed support for accelerating its implementation as China becomes increasingly assertive.

"We have identified new locations and have begun a process with the Philippines to finalise those," a US official told reporters on condition of anonymity ahead of Harris's meeting with Marcos.

"The United States has allocated over $82 million towards implementation (of the existing bases) and more is on the way."

On Tuesday, Harris will visit the Philippine island province of Palawan, which lies along hotly contested waters in the South China Sea.

China claims sovereignty over almost the entire sea, while the Philippines, Vietnam, Malaysia and Brunei have overlapping claims to parts of it.

Beijing has ignored a 2016 international tribunal ruling that its claims have no legal basis.

Harris will meet members of the Philippine Coast Guard on board one of the country's two biggest coast guard vessels and deliver a speech.

She will "reaffirm the strength of the alliance and our commitment to upholding the international rules-based order in the South China Sea and the broader Indo-Pacific," the US official said, using the US term for the Asia-Pacific region.

Harris's trip to the Philippines is part of US efforts to remove any doubt about its commitment to the Asia-Pacific as China aggressively expands its regional influence.

Harris reinforced Biden's message that "we must maintain open lines of communication to responsibly manage the competition between our countries" while speaking to Xi on the sidelines of the Asia-Pacific Economic Cooperation forum in Bangkok, a White House official said.

While her trip to Palawan would likely annoy China, the United States had more to gain from sending a message of reassurance to the Philippines, said Greg Poling, director of the US-based Asia Maritime Transparency Initiative.

"The Philippines will be much more reassured than China will be irritated," Poling said.

Among the initiatives to be launched during Harris's trip are negotiations for a civilian nuclear pact between the United States and the Philippines.

That could lead to the future sales of US nuclear reactors to the Southeast Asian country.

Marcos is a strong supporter of renewable energy and has insisted on the need to reconsider building nuclear power plants in the disaster-prone country.

However, before the United States can sell nuclear equipment to the Philippines, the two countries must sign a civilian nuclear pact known as a "123 agreement", which is designed to prevent the spread of nuclear weapons.