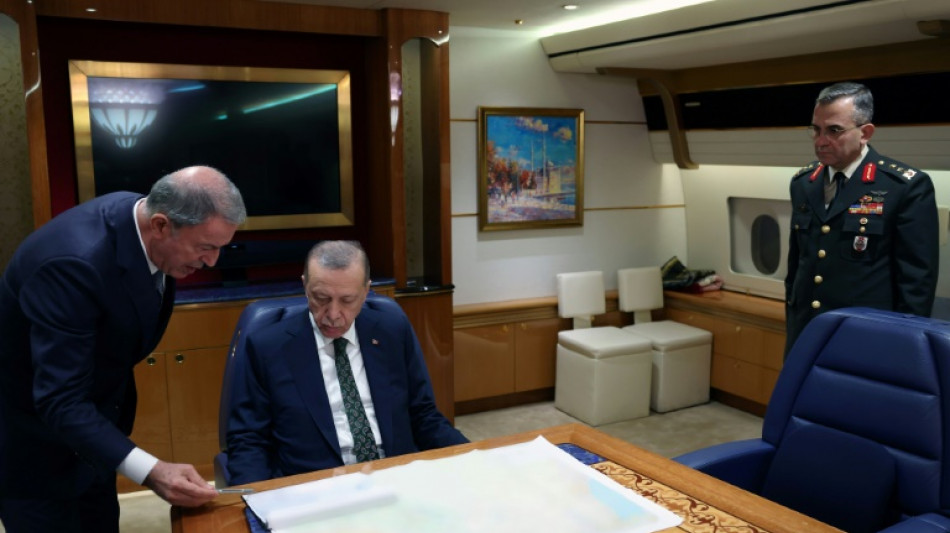 Erdogan also renewed warnings that those attacking Turkey will pay dearly, a day after Ankara's forces launched air raids on bases of outlawed Kurdish groups in northern Syria and Iraq.

"There is no question that this operation be limited to only an aerial operation," Erdogan told reporters on returning to Turkey from Qatar where he attended the FIFA World Cup opening.

"Competent authorities, our defence ministry and chief of staff will together decide the level of force that should be used by our ground forces," Erdogan said.

"We have already warned that we will make those who violate our territory pay," he added.

Erdogan spoke after a rocket strike from Syrian territory killed at least three people, including a child, in a border Turkish town.

That strike came a day after Turkey carried out air raids against the bases of Kurdish militant groups in northern Syria and Iraq which it said were being used to launch "terrorist" attacks on Turkish soil.

The overnight raids mainly targeting positions held by Syrian Kurdish forces in northern and northeastern Syria killed at least 31 people, according to the British-based monitoring group the Syrian Observatory for Human Rights (SOHR).

The Turkish raids, codenamed Operation Claw-Sword, came a week after a blast in central Istanbul killed six people and wounded 81.

Turkey has blamed that attack on the Kurdistan Workers' Party (PKK).

The blast, the deadliest in five years, revived bitter memories of a wave of nationwide attacks between 2015 and 2017.

The PKK has waged a bloody insurgency there for decades and is designated a terror group by Ankara and its Western allies.

But it has denied involvement in the Istanbul explosion.

Ankara considers the YPG to be a PKK-affiliated terror group.

Erdogan said consultations were ongoing on the strength of Ankara's military response and added that the weekend strikes were carried out by "70 planes and drones" who "penetrated 140 kilometres (87 miles) into northern Iraq and 20 kilometres into northern Syria."

An SDF spokesperson told AFP that Turkish airplanes launched on Monday fresh strikes near Kobani, a claim confirmed by the SOHR. A strike hit a regime forces position, according to the SDF.

Since the rocket attack in the morning, there has been an exchange of artillery fire between Turkish forces backed by Syrian proxies and the SDF, according to an AFP correspondent.

Erdogan also revealed he had had "no discussion with (US President Joe) Biden or (Russian President Vladimir) Putin on the subject of the operation."

Turkey's latest military push could create problems for its complex relations with its Western allies -- particularly the United States, which has relied mostly on Syrian Kurdish militia forces in its fight against IS jihadists.

Russia for its part backs pro-Damascus militia in the region.