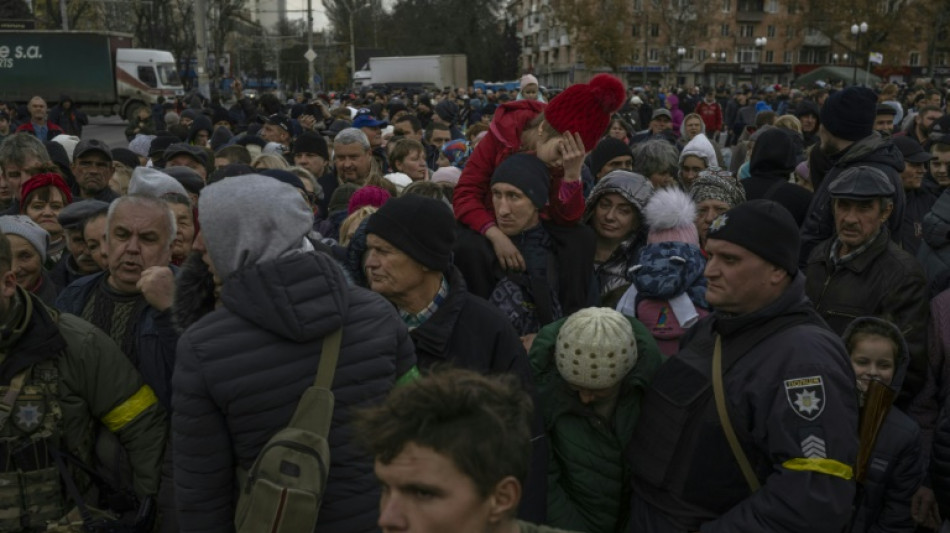 Ukraine said Monday that it had discovered four Russian torture sites in its southern city of Kherson, which Moscow's forces quit this month leaving behind a trail of misery and destruction.

The Kremlin meanwhile vowed to track down and punish those it said were responsible for the "brutal" murder of nearly a dozen Russian servicemen who were allegedly surrendering to Kyiv.

Russian defence officials made the "difficult" decision earlier this month to retreat from Kherson city, the only regional capital Moscow's forces had won after nearly nine months of fighting in Ukraine.

Kyiv accused the withdrawing forces of rendering useless key infrastructure including water and electricity stations in Kherson, whose loss is a strategic and symbolic blow for the Kremlin.

But on Monday, Kyiv also said Moscow had run a network of torture sites in the city, building on claims that Russian authorities had perpetrated abuses on a "horrific" scale there.

"Together with police officers and experts, (prosecutors) conducted inspections of four premises where, during the capture of the city, the occupiers illegally detained people and brutally tortured them," the Ukrainian prosecutor general's office said in a statement.

Russian forces had also set up "pseudo-law enforcement agencies" at detention centres in Kherson as well as in a police station, prosecutors said in a statement.

The remains of rubber truncheons, a wooden bat and "a device with which the occupiers tortured civilians with electricity" were found, prosecutors statement said.

Russian authorities also left behind paperwork documenting the administration of the detention sites, its office added.

The allegations are just the latest from Kyiv against Russian troops, who have been accused of running similar abuse operations in places like Izyium in east Ukraine and near Kyiv.

In both those places, Russian troops were forced back by Ukrainian counter-attacks and the recent recapture of Kherson is just the latest in a string of bruising defeats for Moscow.

And AFP spoke last week to a Kherson resident who said he spent weeks in detention where he was beaten and electrocuted by Russian and pro-Russian forces.

But the Kremlin has also come forward recently with allegations of abuses perpetrated by Ukrainian troops, and on Monday vowed to hold responsible people they accused of killing Russian troops trying to surrender.

"Without a doubt, Russia will itself search for those who committed this crime. They must be found and punished," Kremlin spokesman Dmitry Peskov told reporters.

He was referring to video footage that began circulating on social media last week and which Moscow claims is compelling evidence that Kyiv's troops murdered nearly a dozen Russian soldiers in east Ukraine.

The Russian defence ministry said last week that the videos showed the "deliberate and methodical" killing of over 10 servicemen.

Ukraine has denied that its forces had killed prisoners of war, saying the soldiers were shot following a false surrender.

Russia's Human Rights Council said the alleged executions took place in Makiivka, a village in the eastern Lugansk region, which the Ukrainian army said it had recaptured last week.