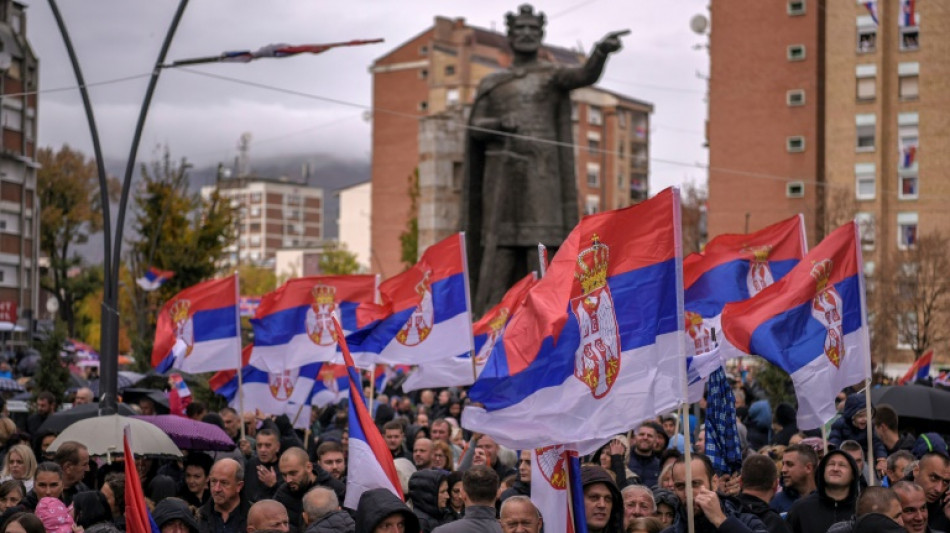 The failure on Monday of EU-mediated talks between Serbia and Kosovo on resolving a car licence plates row threatens to trigger one of the worst regional crises in years.

The main source of tensions between Serbia and its former Albanian-majority province is the latter's declaration of independence in 2008.

Serbia still does not recognise the move and encourages Kosovo's Serb minority to remain loyal to Belgrade.

Here is a brief rundown of the dispute linked to the devastating war between Serbian forces and ethnic Albanians in Kosovo in the late 1990s.

The government in Pristina declared in November that around 10,000 Kosovan Serbs with licence plates issued by Serbia must replace them by next April with plates from the Republic of Kosovo according to a gradual plan involving warnings, fines and eventually road bans.

The move has not been well received by Serbs who have resigned en masse across northern Kosovo, including hundreds of police officers, judges, prosecutors and other bureaucrats in civil institutions, ratcheting up tensions many fear will lead to renewed unrest due to the security vacuum.

Belgrade has warned that they would not watch idly if Pristina sought to punish the Serbs in the north, while Kosovo authorities have insisted they "have the capacity" to keep the situation under control.

Leaders from across Europe and the head of NATO have called for compromise on the issue as Western governments are heavily focused on the war in Ukraine and have little energy for managing another crisis in Europe.

The licence plate debacle comes just months after a dispute over travel documents briefly triggered unrest in northern Kosovo, with Serbs erecting blockades and Kosovo police being fired at.

The fight over the licence plates is actually about Kosovo's sovereignty following the conflict that killed an estimated 13,000 people in the 1990s.

Kosovo declared independence from Serbia in 2008 and has since been formally recognised by roughly 100 countries, most recently by Israel under a deal brokered by former US president Donald Trump.

For Kosovo prime minister Kurti, nothing can be discussed until the reality of independence of the territory of 1.8 million is accepted.

But Serbia insists the declaration is illegal and has watched with fury as Kosovo has been granted membership of the World Bank, IMF, Olympic Committee, FIFA and UEFA.

The refusal of Serbia's key allies Russia and China to recognise the split has in effect blocked Kosovo's path to UN membership.

Belgrade has enshrined in its constitution that Kosovo is an integral part of its territory, with many Serbs considering Kosovo to be the cradle of their national and religious heritage.

Ethnic Albanian-majority Kosovo is home to an estimated 120,000 Serbs, who are largely loyal to Belgrade.

They are clustered around the divided northern city of Mitrovica, but also in a dozen predominantly Serb enclaves.

The strongest resistance to Pristina's authority comes from the Serbs living in the north of the territory at the border with Serbia, which affords them considerable financial and political support.

In Serb areas, locals fly the Serbian flag, use its currency and refuse any loyalty to Pristina, which accuses Belgrade of overseeing a "parallel system" by funding public services such as education and healthcare.

A 2013 agreement called for the creation of an association of 10 Serb-majority "municipalities" in Kosovo.

The arrangement has never been implemented as the two sides cannot agree on how it would work, while many ethnic Albanians fear the idea could lead to a parallel government controlled by Belgrade.

- Fight for the future -

For ethnic Albanians, building a functioning Kosovo state with efficient institutions is vital -- including the management of vehicles, borders.

But for many Serbs, allowing Kosovo to build up its own institutions is recognition that the territory is no longer under Belgrade's control and will not return to the fold for the foreseeable future, if ever.

So by protesting the introduction of licence plates, Serbs are effectively slowing the process of Kosovo becoming a functioning state outside of Belgrade's orbit.

In the meantime, a NATO-led force of nearly 4,000 members, assisted by about 130 members of EULEX, the European Union's rule of law mission in Kosovo, are tasked with trying to prevent the situation from escalating.