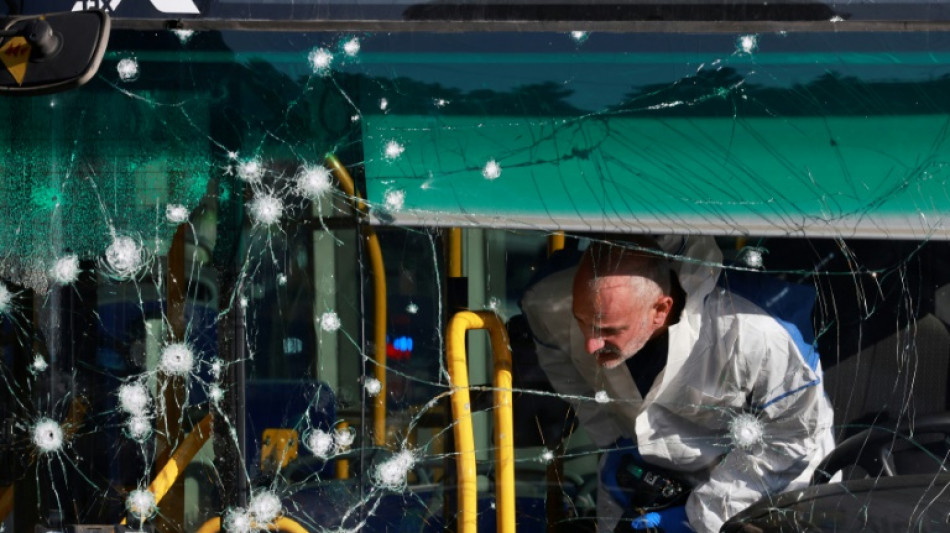 The first bombings to hit Jerusalem since 2016, according to security officials, targeted an area frequented by ultra-Orthodox Jews at the western exit from Jerusalem.

A 16-year-old boy was killed and 11 other people wounded in the first blast, before a second hit a stop nearby, wounding three people, hospitals treating the casualties said.

An AFP photographer said the blast had ripped a hole through a metal fence behind the bus stop, with an electric scooter and a hat lying on the ground.

The photographer heard the second blast, which he said tore through the side of a bus.

The twin blasts struck half an hour apart, police said. Explosives experts were at the scene with police and forensic scientists collecting evidence.

Doctors at the hospital were treating five people wounded in the blasts, while Hadassah medical centre said it had admitted nine wounded.

The driver whose bus was damaged in the second explosion said the stop was "very full" when the blast hit.

"As I was leaving it, I heard a loud explosion. I opened the doors, people ran out. A miracle happened to us," Motty Gabai told army radio.

As the search for suspects got underway, a security source told AFP the bombs were detonated remotely.

Israeli police described the blasts as "a combined terror attack" and said explosive charges were planted at the two bus stops.

"We congratulate our Palestinian people and our people in the occupied city of Jerusalem on the heroic special operation at the bus stop," Hamas spokesman Abd al-Latif al-Qanua said.

The bombings hit amid talks on the make-up of a right-wing coalition government being formed by prime minister-designate Benjamin Netanyahu, a veteran hawk.

A key ally in the proposed alliance, far-right lawmaker Itamar Ben-Gvir, visited the scene of the blasts.

"We must form a government as soon as possible. The terror is not waiting," he said.

"Terrorism and violence against civilians can never be justified," Tor Wennesland wrote on Twitter.

The Shin Bet domestic security agency told AFP the blasts were the first in Jerusalem since 2016, with 34 bombings thwarted this year.

During the second intifada, or uprising, in the early 2000s, Palestinian militants repeatedly planted bombs at urban bus stops, including in Jerusalem.

Violence has flared in recent months, particularly in the occupied West Bank, where Israeli forces have launched often deadly raids following a series of fatal attacks on Israeli targets.

After Wednesday's bomb attacks, the Israeli military announced two checkpoints near the flashpoint West Bank city of Jenin had been closed.

An Israeli Druze teenager involved in a car accident in the Jenin area was abducted by Palestinian militants and died as a result, his father said on Wednesday.

"He was still alive, they took him in front of my eyes and I couldn't do anything," Hossam Fero told Ynet radio.

Israelis abducted dead or alive have been used in the past as bargaining chips by Palestinian militant groups to secure the release of prisoners or the return of bodies of Palestinians killed in clashes by Israel.