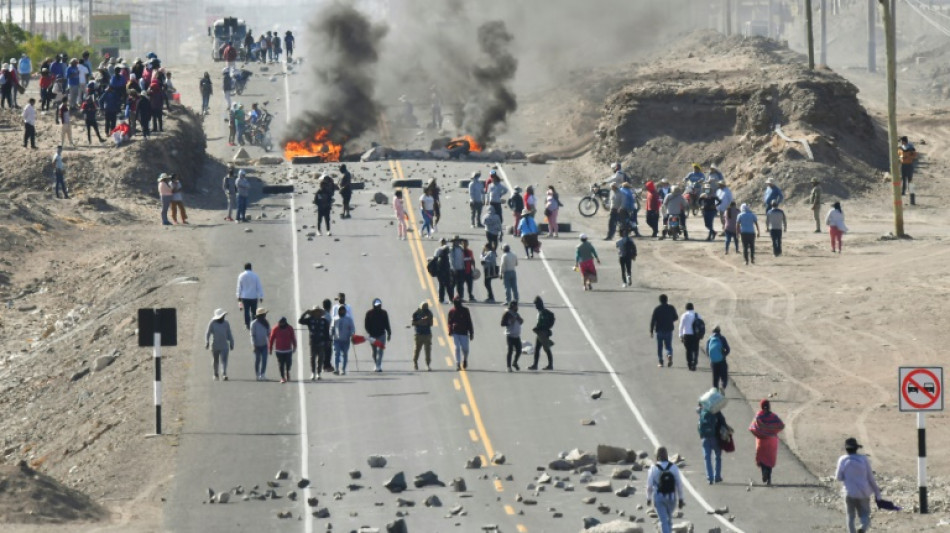 Lima and other Peruvian regions were under a renewed state of emergency even as opponents of President Dina Boluarte began mobilizing toward the capital ahead of a major demonstration Monday, the latest in weeks of deadly unrest.

At least 42 people have died, according to Peru's human rights ombudsman, in five weeks of clashes at burning roadblocks and other flashpoints to demand fresh elections and Boluarte's resignation.

She took over on December 7 as the South American country's first woman president following the impeachment and arrest of leftist Pedro Castillo for his failed bid to dissolve Congress and rule by decree.

On Sunday some 3,000 protesters amassed in Andahuaylas in southeastern Peru began boarding trucks and buses bound for the demonstration in Lima, RPP radio reported.

The government extended by 30 days a state of emergency from midnight Saturday for Lima, Cusco, Callao and Puno, authorizing the military to back up police actions to restore public order.

The state of emergency also suspended constitutional rights such as freedom of movement and assembly, according to a decree published in the official gazette.

In protest epicenter Puno, the government declared a new night-time curfew for 10 days, from 8:00 pm to 4:00 am.

Protesters were nevertheless preparing for the trip to the capital.

"We've made the decision to go to Lima" from Monday, said Julio Vilca, a protest leader in Ilave, near Puno city.

Dozens of demonstrators had arrived in Lima's Miraflores district late Saturday as part of a mobilization for what they called a "takeover of the city."

Almost 100 stretches of road remained blockaded Sunday in 10 of Peru's 25 regions -- a record according to a senior land transport official.

Castillo, a former rural school teacher and union leader, faced vehement opposition from Congress during his 18 months in office and is the subject of numerous criminal investigations into allegations of widespread graft.

His ouster sparked immediate nationwide protests, mainly among the rural poor, that petered out over the holiday period but resumed on January 4.

Some 500 Peruvians, including several dozen police officers, attended a mass Sunday in Lima's central cathedral for fallen protesters, as well as for a policeman burnt alive in the southern city of Juliaca.

Many of the mourners wore white T-shirts to symbolize peace and bore photographs of the dead.

Lima Archbishop Carlos Castillo, who led the service in Spanish and the Quechua Indigenous language, called for peace and an end to the "spiral of violence."

"The blood that is spilled does not cry out for vengeance," he said.

"May the terrible cruelties that were done to some," including to "our burnt policeman brother, may these cruelties disappear from our horizon."

On Friday, Boluarte expressed her "regret" for the deaths, but insisted: "I will not resign."

More than 100 Peruvian, Argentine and Chilean intellectuals, meanwhile, urged Boluarte in an open letter Saturday to "stop the massacre of citizens who exercise their legitimate right" to protest.

"We ask Dina Boluarte to listen to the demand of the people and to resign, to immediately abandon the position and call immediate elections," it added.

The unrest has been largely concentrated in the southern Andes, where Quechua and Aymara communities live.

The Inter-American Commission on Human Rights has said that in order to end the crisis, these groups need to be better integrated into Peruvian society.

Meanwhile the airport in Cusco, gateway to the famed Machu Picchu site, reopened Saturday after being shuttered two days earlier, the second time it had been closed due to the protests.

Train services to the historic Inca citadel resumed on Sunday.

Unions say the tourism industry was losing up to seven million sols (US$1.7 million) a day.

Peru has been politically unstable for years, with 60-year-old Boluarte the country's sixth president in five years.

Castillo has been remanded in custody for 18 months, charged with rebellion and other crimes.

The authorities insist radical groups are behind the protests, including remnants of the Shining Path communist guerrilla group.

As proof, they have presented the capture this week of a former member of that organization, Rocio Leandro, whom the police accuse of having financed some of the unrest.