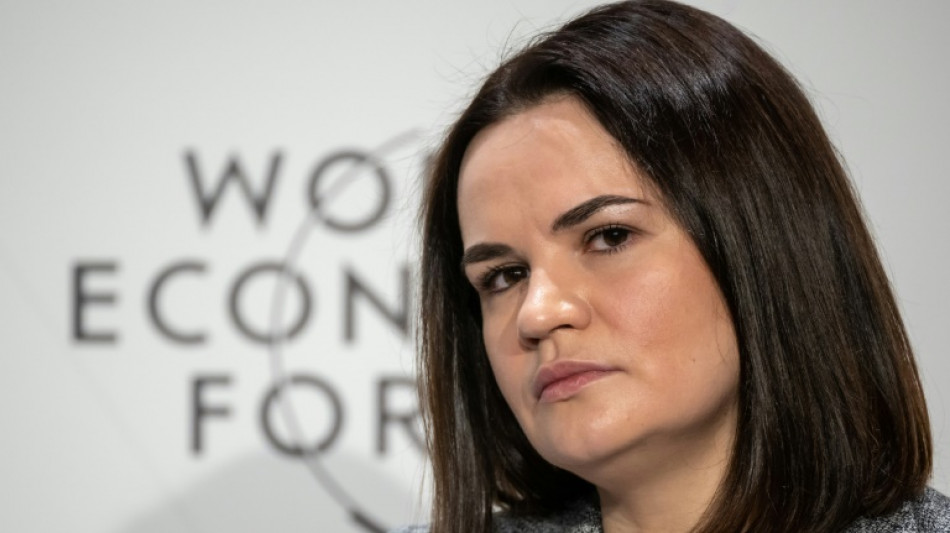 The trial in absentia of Belarus opposition leader Svetlana Tikhanovskaya began in Minsk on Tuesday as strongman president Alexander Lukashenko cracks down on critics who challenged his three-decade rule.

Tikhanovskaya, who claimed victory over Lukashenko in the 2020 presidential election, faces a litany of charges including high treason, "conspiracy to seize power" and creating and leading an extremist organisation.

The 40-year-old activist -- who was forced during mass protests that followed the vote to leave Belarus for neighbouring Lithuania, a European Union country -- has become the face of Belarusian democratic forces.

In an interview with AFP in Davos, Switzerland, Tikhanovskaya described the trial as a "farce" and said she had not been given access to court documents ahead of the proceedings.

"I don't know how long this trial will take place, how many days, but I'm sure they will sentence me to many, many years in jail," she said on Monday.

Speaking in Davos on Tuesday, the protest leader said she was not allowed to take part in the hearings or receive a copy of the charge sheet.

She was assigned a lawyer but she could not get in touch with him, she added.

"How is he going to defend me?" Tikhanovskaya asked. "I am sure that has not been part of his plans."

Tikhanovskaya was part of a trio of women -- along with Maria Kolesnikova and Veronika Tsepkalo -- who spearheaded massive rallies against Lukashenko that broke out across Belarus in 2020.

Tsepkalo now lives in exile, while Kolesnikova refused to leave Belarus and tore up her passport. She was sentenced to 11 years in prison in 2021.

Tikhanovskaya's high-profile trial comes after Belarusian authorities put in the dock a number of other critics, including jailed Nobel Prize winner Ales Bialiatski.

Bialiatski, 60, founded Viasna (Spring), the country's top rights group, and has been in detention since July 2021, along with two of his associates.

The rights campaigners stand accused of smuggling a "large amount of cash" into Belarus to allegedly fund opposition activities, and face between seven and 12 years in prison.

"The political repression by the regime of Lukashenko has reached an unprecedented level," the European Union's foreign policy chief Josep Borrell said in a statement.

He said that the politically motivated trials were "aimed at silencing any independent voices and closing all remaining space for democratic debate."

Ahead of the start of Tikhanovskaya's trial, investigators announced new charges against her husband, Sergei Tikhanovsky, who in 2021 was found guilty of organising riots and inciting social hatred.

He was sentenced to 18 years in prison.

The charismatic 44-year-old YouTube blogger galvanised Belarusians when he ran for president in 2020 and coined a new insult for long-time incumbent Lukashenko when he called him a "cockroach."

Tikhanovsky was not allowed to run in the election, and his wife ran in his place, claiming victory.

Belarus witnessed a historic protest movement denouncing the controversial re-election of Lukashenko, who has been in power for nearly 30 years.

Backed by Russian leader Vladimir Putin, Lukashenko unleashed a massive crackdown, throwing critics into prison or forcing them into exile.

The Viasna rights group says there are more than 1,400 political prisoners in Belarus.

On Monday, a Polish-Belarusian journalist went on trial in the western city of Grodno.

Andrzej Poczobut, a correspondent for leading Polish daily Gazeta Wyborcza and a representative of the Polish minority in Belarus, was arrested in March, 2021.

He faces up to 12 years in prison for criticising Lukashenko's regime, if convicted.