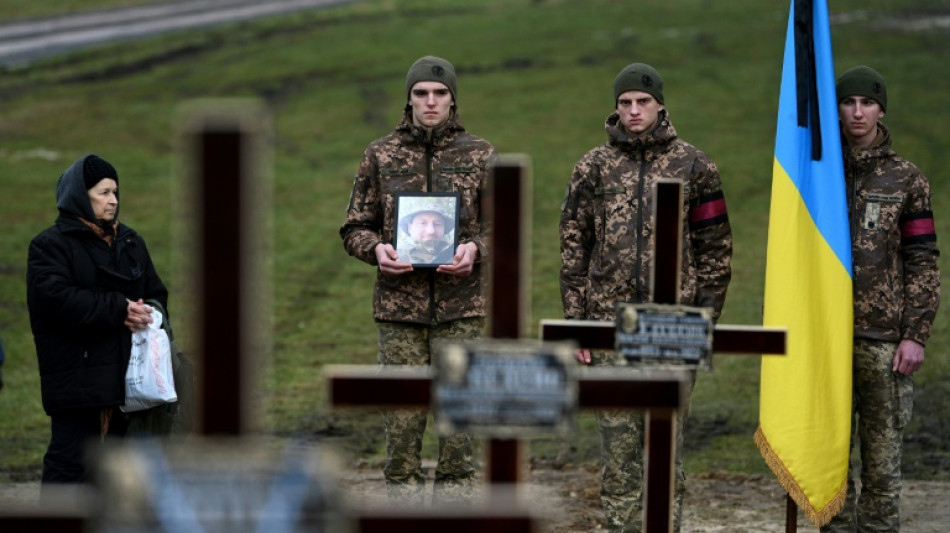 A trio of European allies pledged missiles and artillery for Ukraine on Thursday as Kyiv urged partners to scale-up support "considerably" ahead of a major donor meeting.

The new promises flew in the face of a Kremlin warning against a "extremely dangerous" escalation if the West -- long fearful of provoking direct confrontation with nuclear-armed Russia -- sent longer range weapons to Kyiv.

As Ukraine ramped up calls for tanks and longer-range weapons ahead of a key meeting in Germany on Friday designed to discuss military aid to Ukraine, Britain announced it would send 600 Brimstone missiles to the war-torn country.

Denmark said it would donate 19 French-made Caesar howitzers to Ukraine and Sweden promised to send its Archer artillery system, a modern mobile howitzer requested by Kyiv for months.

EU chief Charles Michel said he believed that tanks "must be delivered" as he visited Kyiv.

As the pledges came in, senior Ukrainian presidential aide Mykhaylo Podolyak said it was "time to stop trembling at (Russian leader Vladimir) Putin and take the final step."

Earlier on Thursday, Ukraine's foreign and defence ministries urged allies to "considerably" boost arms deliveries and called on countries that have Leopard tanks, including Germany and Turkey, to send them.

Germany has been very cautious in providing heavy weapons, with Chancellor Olaf Scholz under rising pressure within Europe to authorise Leopard tank exports ahead of Friday's meeting at the US military base of Ramstein.

Scholz told US congressmen in Davos that Germany will supply heavy tanks to Ukraine if the United States sends tanks too, a senior US lawmaker told AFP on Thursday.

"It's basically that it's got to be the United States and Germany. There's no question about that," said Gregory Meeks, the top-ranking Democrat on the House Foreign Affairs Committee.

"There are times where we shouldn't hesitate," Ukrainian President Volodymyr Zelensky told the annual World Economic Forum gathering in Davos via video-link.

"When someone says 'I will give tanks if someone else will also share tanks'... I don't think this is the right strategy to go with."

Western partners fear that Ukraine could use long-range weapons to hit deep inside Russian territory or Crimea -- a peninsula Moscow annexed in 2014 -- despite Kyiv promising it would not do so.

The Kremlin warned of escalating the conflict to a "whole new level" if the West meets Ukraine's latest calls for longer-range weapons.

"It will mean bringing the conflict to a whole new level, which, of course, will not bode well from the point of view of global and pan-European security," he added.

The New York Times reported on Wednesday that Washington is considering softening its position and allowing Ukraine to use US-supplied weapons against Russian targets in Crimea.

Military support to Ukraine will be discussed by representatives of around 50 countries in Ramstein, including all 30 members of NATO.

"The main message there will be more support and more advanced support, heavier weapons, and more modern weapons, because this is a fight for our values," NATO chief Jens Stoltenberg said in Davos on Wednesday.

Weapons already provided by the West have been credited with helping Ukraine win back territory in recent months, including in the eastern Donetsk region.

On the ground in a recaptured part of Donetsk, volunteers tread carefully in collecting abandoned bodies.

"There is no time to waste -- animals and nature are destroying them and if we don't hurry, we won't manage to bring all of our soldiers home," said Oleksiy Yukov, who last September lost an eye and sustained leg injuries when a mine exploded as he was trying to recover a body.

Air raid sirens wailed on Thursday in Kyiv and nationwide, a day after a helicopter crash outside the capital killed the interior minister and 13 others near a kindergarten.

He was the highest-ranking Ukrainian official to die since Russia sent troops into Ukraine on February 24, 2022.

Zelensky said the investigation into the accident was ongoing, with several theories being examined.