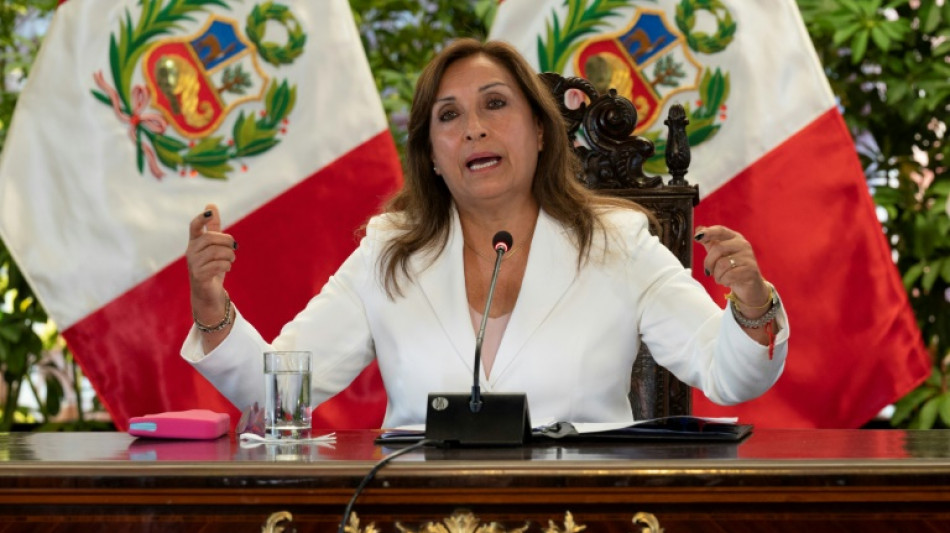 Peru's President Dina Boluarte called Tuesday for a "national truce" to end weeks of nationwide unrest as protesters gathered again in the capital to press for her resignation and fresh elections.

Thousands of people from Peru's Andean regions, many in traditional dress, marched in central Lima chanting "Dina assassin," blaming her for the 46 demonstrators killed since protests broke out last month.

One protester carried a big doll with a bloody knife in its hand and a picture of Boluarte attached, an AFP journalist saw.

Many Peruvians remain angry at the December 7 ouster of then-president Pedro Castillo, who was arrested after attempting to dissolve Congress and rule by decree.

Protests broke out almost immediately, largely fueled by anger in poor rural regions in the south where inhabitants -- mainly Indigenous -- felt that Castillo, who has Indigenous roots himself, represented their interests rather than those of the Lima elite.

Demonstrators have kept up weeks of protests and roadblocks and are also demanding the dissolution of Congress and the rewriting of the constitution.

"I call on my dear country to a national truce to allow for the establishment of dialogue, to fix the agenda for each region and develop our towns," Boluarte said in a press conference with foreign media. "I will not tire from calling for dialogue, peace and unity."

A visibly emotional Boluarte apologized several times for those killed in the protests but ruled out resigning.

"I will go once we have called a general election... I have no intention of remaining in power."

Boluarte said she was sure Congress would agree in February to advance elections, currently scheduled for April 2024.

Asked about her possible resignation, Boluarte scoffed at the idea that it would "solve the crisis and the violence."

"We don't believe her words anymore," said protester Rosa Soncco, a 37-year-old hailing from the mountain town of Acomayo, in the southern Cusco region.

"We will stay here until the end, until she leaves," she said.

Police fired tear gas to repel some of the protesters on Tuesday, AFP journalists saw, while at least one person was seen bleeding from their head.

Boluarte is due to have a video meeting with the Organization of American States (OAS) on Wednesday to discuss the situation in Peru.

Her government has come under fire from rights groups over alleged repression of protests and the disproportionate use of force by security forces.

Boluarte has called a state of emergency in Peru, allowing the army to assist police in maintaining order.

"I will appear before the OAS to tell the truth. The Peruvian government and especially Dina Boluarte have nothing to hide," she said.

Boluarte claims some of the protesters were killed by ammunition that is not used by the police.

The president said that the deaths "hurt me, as a woman, a mother and a daughter."

She also hit out at her predecessor Castillo, saying he sparked unrest by trying to broaden his powers in a bid to avoid an impeachment vote and stave off corruption investigations.

"It suited him to stage a coup d'etat so he could play the victim and mobilize all this paramilitary apparatus so as not to answer before the public prosecutor for the acts of corruption that he is accused of," said Boluarte.

"There is no victim here, Mr Castillo. There is a bleeding country because of your irresponsibility."

Boluarte is from the same left-wing party as Castillo and was his running mate during his successful 2021 election campaign. She served as his vice-president before replacing him.