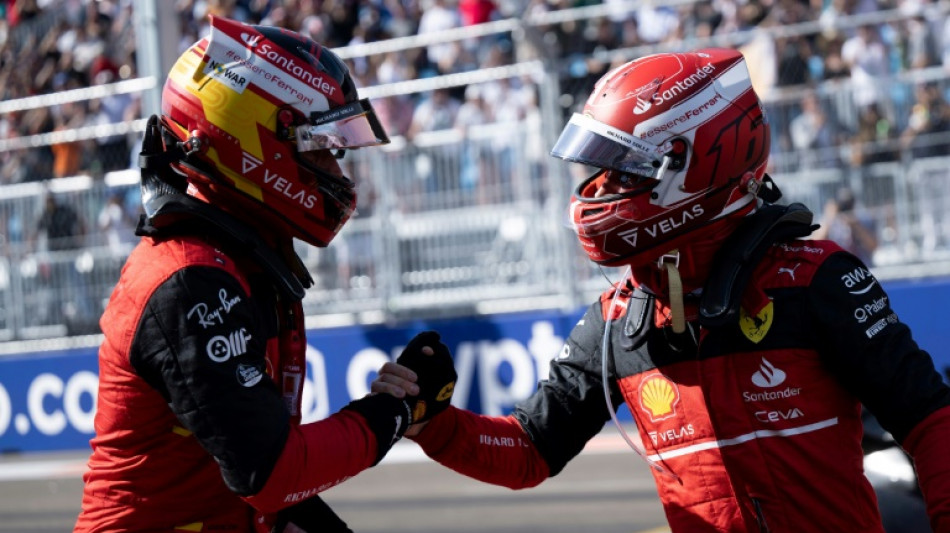 World championship leader Charles Leclerc claimed pole position and led Ferrari to a front-row lockout on Saturday when he topped the times in qualifying for the inaugural Miami Grand Prix.

The 24-year-old Monegasque driver clocked a fastest lap in one minute and 28.796 seconds to outpace his team-mate by two-tenths in front of an enthusiastic sell-out crowd at the Miami International Autodrome.

It was Leclerc's third pole this year and the 12th of his career. For Sainz it is the second time he had secured a front row start. It was Ferrari's first front row lockout since the 2019 Mexican Grand Prix.

"It is amazing to be here and the fans are crazy," said a delighted Leclerc. "It is going to be a big challenge tomorrow, but we feel very motivated as there are so many Ferrari fans here. Hopefully we can come out on top!"

Verstappen, who in the championship and trails Leclerc by 27 points, swallowed his disappointment and said: "Overall, I am pretty pleased with qualifying as I only did four or five laps yesterday. But we have to start making these weekends less difficult."

Pierre Gasly of Alpha Tauri qualified seventh ahead of Lando Norris of McLaren and Yuki Tsunoda in the second Alpha Tauri with Lance Stroll taking 10th for Aston Martin.

After his heavy shunt in the morning's final practice, Esteban Ocon was unable to take part because his chassis had been cracked on impact with the barriers at Turn 14.

He was unhurt but expected to take part in Sunday's 57-lap race from the back of the grid in a rebuilt car.

The opening Q1 session began in heavy heat and humidity with an air temperature of 34 degrees and the track at 53 degrees, fatiguing conditions for all involved. The slight breeze was welcome.

Kevin Magnussen set the opening pace before Verstappen took control, heading the early times ahead of Perez as Russell signalled that Mercedes had regained their vim by going third before Ferrari responded.

Hamilton, however, was struggling in 18th before leaping to fifth while former First Lady Michelle Obama studied his progress from the Mercedes garage.

Q2 began with Mick Schumacher first out for Haas before the Ferraris and then Red Bull set the pace, Verstappen quickest ahead of Perez by four-tenths. Hamilton took an early fifth, but Russell struggled.

"I'm bouncing," Russell said after surviving a wild moment at Turn Six before taking seventh as Leclerc went quickest in 1:9.130, an advantage of 0.072 on Verstappen.

But it was not enough to survive the final rush that pushed him down to 12th behind two-time champion Fernando Alonso's Alpine. They missed the top ten shootout along with four-time champion Sebastian Vettel's Aston Martin, Daniel Ricciardo of McLaren and Mick Schumacher of Haas.

Hamilton's survival ensured Mercedes avoided repeating the ignominy of failing to reach Q3 with either car from Imola in April.

The shootout began with Leclerc going top before Verstappen clocked 1:28.991 – the fastest lap of the weekend thus far -- with Sainz going third.

The top three were separated by 0.080 after their first flying runs with Perez fourth ahead of Bottas and Hamilton.

That left them all set to push again in their final runs for pole as Ferrari led the way and Verstappen, pushing hard, failed to respond.