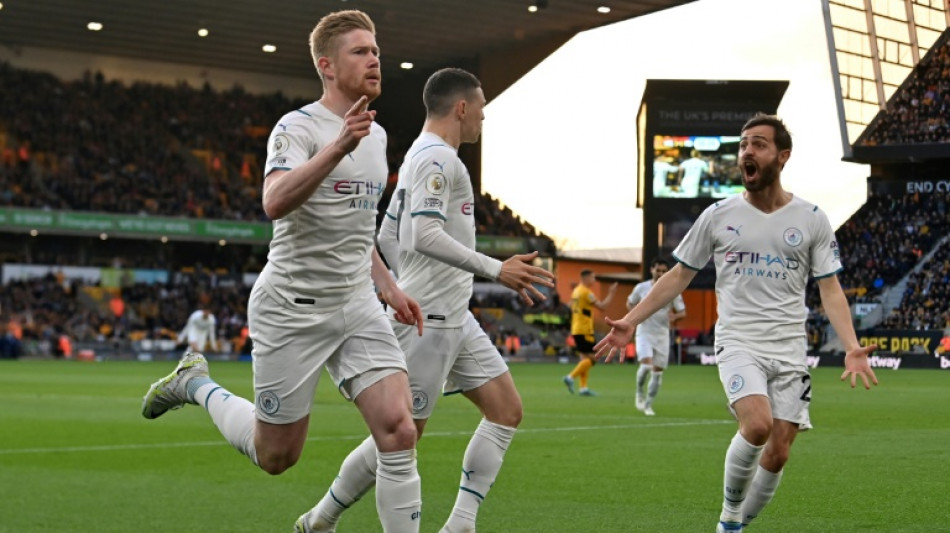 Kevin De Bruyne produced a four-goal masterclass as Manchester City thrashed Wolves 5-1 to move three points clear at the top of the Premier League, while Chelsea consolidated their top four place and pushed Leeds deeper into relegation trouble on Wednesday.

City had seen second-placed Liverpool go level on points with them after a 2-1 win at Aston Villa on Tuesday.

After De Bruyne put City ahead in the seventh minute from Bernardo Silva's pass, the leaders were briefly rocked by Leander Dendoncker's equaliser four minutes later.

But De Bruyne extinguished Wolves' hopes of a shock win as he completed his hat-trick with two more lethal finishes in the 16th and 24th minutes.

He bagged his fourth goal from close range in the 60th minute and Raheem Sterling put the seal on the demolition with an 85th-minute tap-in.

If City can win at West Ham on Sunday, they will climb six points clear of Liverpool before Jurgen Klopp's quadruple-chasing team next play in the league at Southampton on Tuesday.

City's second goal spree in four days after the 5-0 rout of Newcastle on Sunday also gives them an important seven-goal advantage over Liverpool in the goal difference column.

Their latest win was even more impressive given City are without injured defenders Ruben Dias, John Stones and Kyle Walker for the rest of the season, with Aymeric Laporte limping off in the second half at Molineux.

While Liverpool have maintained a blistering pace in pursuit of City since January, Guardiola's team have been up to the challenge.

After drawing with Liverpool on April 10, City have won five successive league games, scoring 22 times and conceding only twice.

Chelsea moved to the brink of qualifying for next season's Champions League with a 3-0 victory at struggling Leeds.

Thomas Tuchel's side won for the first time since Todd Boehly's consortium agreed a deal to buy Chelsea from Roman Abramovich last week.

Mason Mount opened the scoring in the early stages at Elland Road and Leeds suffered another blow when Daniel James was sent off.

Third-placed Chelsea are now eight points clear of fifth-placed Tottenham and will be guaranteed a top-four finish if Antonio Conte's team fail to beat fourth-placed Arsenal on Thursday.

Arresting their worrying recent slump was the ideal preparation for Chelsea ahead of Saturday's FA Cup final against Liverpool at Wembley.

"We accepted all the obstacles we'd have to face, a physical team and an emotional stadium. We were strong from the beginning and deserved to win," said Tuchel, who revealed Mateo Kovacic could miss the final with an ankle injury.

While Chelsea look to end the season on a high, Leeds are in grave danger of relegation.

Burnley have three games left compared to only two for Leeds, who host Brighton and travel to Brentford in the matches that will decide if their two-season stay in the top flight is destined to end with a return to the Championship.

"None of us have lived this. In big games we make the exact same mistakes. We are all in this together and doing everything we can. We're up for the challenge," Marsch said.

Everton moved two points clear of Leeds after a 0-0 draw at relegated Watford.

Frank Lampard's side have lost just once in their last six matches to climb out of the relegation zone.

They also have a game in hand on Leeds in the fight for survival, but will feel like a point was a disappointing return against a Watford team with nothing to play for.

Jamie Vardy scored twice and James Maddison also netted as Leicester beat relegated Norwich 3-0 at the King Power Stadium to end a run of seven games without a win.