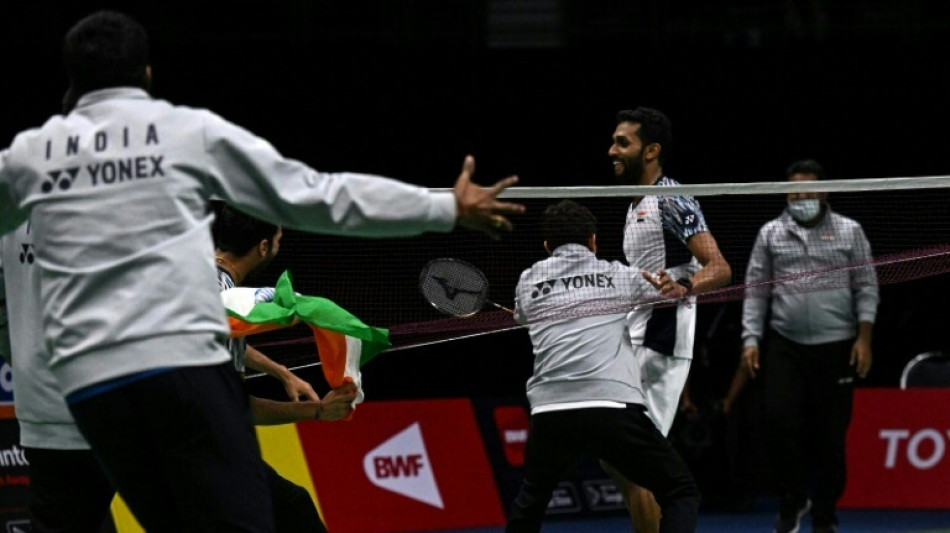 H.S. Prannoy overcame an injury scare to secure the vital point as India shocked Denmark in Thailand early Saturday to reach the finals of the Thomas and Uber Cup men's badminton tournament for the first time.

"To give some power to my team-mates, that was my goal today," he said.

But unfortunately it wasn't enough.

In the end, India and Denmark were deadlocked in a 2-2 tie, and 13th ranked out-of-form Rasmus Gemke was unable to overcome Prannoy, who is 23rd in the world.

Prannoy suffered a nasty slip and injury scare in the first game which he lost 13-21.

But it was all one-way traffic in game two and three - Gemke who was playing in his first tournament all year didn't have the match fitness to cope after an injury-plagued 2021.

Meanwhile, in the women's Uber Cup, world number one Akane Yamaguchi suffered a second defeat in three days, as Japan were dumped out in the semi-finals by South Korea on Friday afternoon.

An Se-young's battling win over Yamaguchi set the Koreans on their way to a 3-0 victory and a place in Saturday's final of the women's team championships against China.

Holders China defeated hosts Thailand by the same 3-0 scoreline in Bangkok in the other semi-final.

Cheered on by her Japanese team-mates whacking drums and shaking tambourines, world champion Yamaguchi dominated the first game 21-15 against the world number four An.

She also looked in control early in the second game, but the 20-year-old An was able to turn around a six-point deficit.

A spate of unforced errors from Yamaguchi also contributed to An's change of fortune as she won the second game 21-18.

Yamaguchi carved out a five-point lead in the deciding game but a seven-point run from An saw Yamaguchi's frustrations grow.

An epic 44-shot rally took its toll on the Japanese as An levelled the scores at 18-18.

Two critical errors from Yamaguchi saw the youngster gain the upper hand and then seal the match 21-18, before lying on the floor screaming in delight.

"During the game I tried to increase the speed of the shuttle but... I would lose control, it caused many mistakes," Yamaguchi told reporters.

On Wednesday, Yamaguchi suffered a shock loss to Bilqis Prasista, a teenage Indonesian rookie ranked 333rd in the world.